With shares down by nearly two thirds in 2020, is Park Hotels & Resorts a buy, or is there a very good reason for the pain?

Real estate investment trusts (REITs) are structured to create income for investors, but Park Hotels & Resorts (PK -4.75%) stopped paying a dividend. Income-focused investors should clearly avoid the stock at this point -- but could there be an opportunity for more aggressive investors to play a turnaround here? Indeed, with shares down by nearly two-thirds in 2020, there's probably material recovery potential, but only if you can handle the risk.

The core of any real estate investment trust is the properties it owns. Park Hotels & Resorts owns, as its name implies, around 60 hotels and resorts. It plays at the high end of the market, with roughly 85% of its more than 33,000 rooms in the luxury or upper-upscale segment of the market. 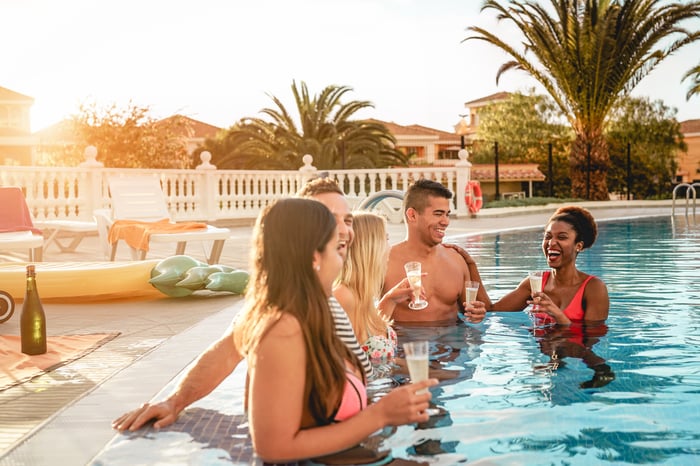 Hotels are generally cyclical properties that tend to do well when the economy is rocking and rolling, but suffer when the economy hits a soft patch. The lease length is, effectively, one day, so the pain hits fast here. Operating at the high end would normally soften the blow of a downturn a little, since wealthy customers will probably be less impacted by recessions. However, the cyclical nature of the hotel business isn't avoidable.

2. This recession is worse

That's notable today because the U.S. economy fell into a recession in February. But this downturn isn't a normal one, since the main driver has been the COVID-19 pandemic. To slow the spread of COVID-19, the government forced non-essential businesses to close and asked people to stay home as much as possible. The second point is the big one here, since people hiding in their homes translates into a material reduction in travel. That, in turn, means less people going on vacation.

This isn't a trend that appears likely to reverse in quick fashion. For evidence of that, look at the air travel space, where companies are still retrenching to deal with a massive drop in demand. Major airlines have been cutting flights and reducing headcount at an alarming rate. That trend suggests that travel won't pick up anytime soon, which means demand for even high-end hotels and resorts is likely to remain weak as well. This is not a typical recession that Park Hotels & Resorts can simply muddle through without too much difficulty -- it's a different animal altogether. The real problem right now is that customers are afraid to travel, and it will take time for that fear to pass.

3. The hit has been painful

In early June, Park Hotels & Resorts provided an update on its portfolio. There's no way to sugarcoat what's happening: Of the 60 hotels the company owns, only 22 were operating at the time. None of the operating properties was fully operational. In total, the REIT's portfolio was operating at just 15% of potential capacity. That is not a sustainable level.

That's why the REIT suspended its dividend when it announced first-quarter earnings. The goal of this move is pretty obvious: Management was looking to preserve cash so it could get through what will likely be one of the most challenging hotel markets in decades. It was the right move for the REIT, but eliminating the dividend can only provide so much relief. 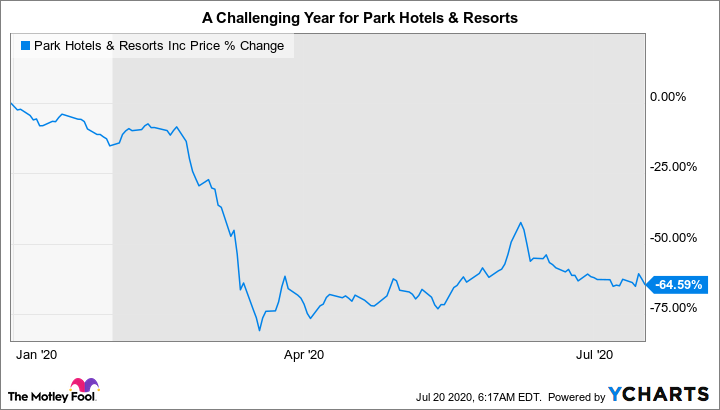 That's why Park Hotels & Resorts has also been issuing additional debt. What's notable is that the most recent bond required the company to pay an interest rate of 7.5%. That's a fairly high number given that interest rates remain near historically low levels. Clearly, bond investors are asking to be compensated for a material amount of risk. The extra cash will, indeed, help the REIT to keep its business going, but at what appears to be a very high cost.

However, this isn't the only thing that management is doing. Park Hotels & Resorts has also been working with its lenders to adjust its debt covenants. These are clauses and tests meant to protect the REIT's lenders in the case of financial trouble. It is good news that the lenders are working with Park Hotels & Resorts to give it breathing room, but it is decidedly bad news that the REIT needs the extra assistance. Investors should generally see such moves as a sign of increasing investment risk.

All in, Park Hotels & Resorts is facing a downturn of a nature that is way outside of the historical norm. And with COVID-19 cases rising again, there's no clear end in sight. The REIT is doing the right things to survive, but there's a very real risk that it won't be enough. The steps it is taking (eliminating the dividend, adding leverage, and adjusting debt covenants), meanwhile, are all generally concerning moves that suggest risk is very high right now. In the end, most investors are probably better off avoiding Park Hotels & Resorts today -- though to be fair, the same thing could probably be said of most, if not all, hotel REITs in the current environment.

Why EPR Properties and Park Hotels & Resorts Advanced 13% or More in August, but Tanger Factory Outlets Fell Over 11%

Park Hotels & Resorts Dives Deep Into the Red in Q2

Retail and Hospitality REITs Are Getting Crushed Today