The video game industry has long been an obvious potential player in virtual reality (VR) content development. But as far as the VR industry has grown, it has been led by small developers and independent game studios that create one-off games specifically for VR, not by typical AAA video game studios.

That may be changing now that the VR industry has a larger installed base of a few million headsets around the world. The success that Oculus Quest from Facebook (NASDAQ:FB) has had in bringing stand-alone VR (which doesn't require a high-end gaming computer) to the industry could create an attractive market for video game studios. And one big-name game may lead the way. 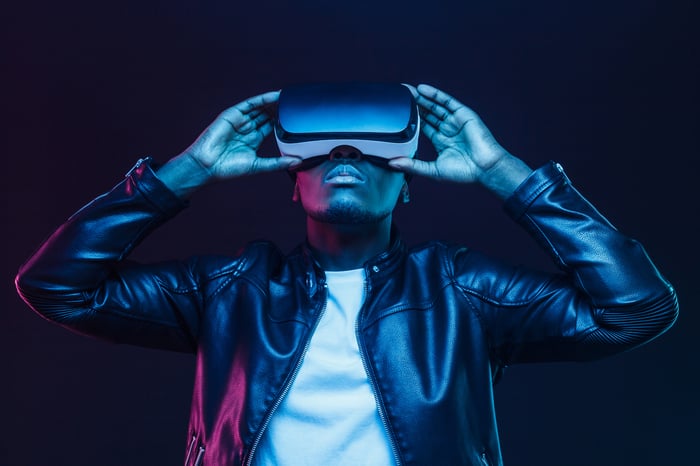 Grand Theft Auto may be coming to VR

There was an encouraging sign recently that big games may be making their way to VR. Video Games Deluxe, a studio that is working exclusively with Take-Two Interactive's (NASDAQ:TTWO) Rockstar Games, is hiring for an "open world AAA VR project," continuing on the work done on L.A. Noire: The VR Case Files. It's not clear what exactly the project will be when completed, but early speculation is that it could be a VR version of Grand Theft Auto 5 (GTA 5).

It's worth noting that GTA 5 is more than seven years old at this point, so this would be adding a new VR game for a fairly old title. But studios like Rockstar don't see enough upside in VR to be building AAA games for VR-only devices yet, so using existing games to build a following in VR is a natural place to begin.

Why game studios have ignored VR

The reason VR hasn't been an area of focus for big game studios is that the market simply isn't big enough. Sony (NYSE:SONY) has sold over 5 million PlayStation VR headsets and Oculus sold 705,000 Quest headsets in 2019, according to the Nielsen company SuperData Research. But that pales in comparison with over 109 million PS4s in the market and over 48 million Xbox Ones. When combined with gaming PCs, there are hundreds of millions of consoles and PCs that they can build games for. VR is simply a much smaller market.

Building even small experiences in VR now could be a way for game studios to explore how to build for VR and what experiences will work for users. And that could be important ahead of rumored virtual reality/augmented reality (VR/AR) headsets from Apple and updates from Oculus. A decade from now, the number of VR/AR headsets on the market could exceed gaming consoles, so developers need to start learning what content works on the platform.

Big studios like Activision Blizzard and Electronic Arts have largely ignored VR so far. They still don't see this market as attractive enough, but that leaves an opening for studios that can build successful VR titles.

VR may be a small industry now, but the companies building content for headsets today will have a foundation to build on for potentially decades. VR is growing, and the developers that build the hit games of the future may be starting their work today. Take-Two Interactive's investment in VR makes it a developer to watch. And Activision Blizzard and Electronic Arts may be leaving a potentially lucrative market to their competitors.