Please ensure Javascript is enabled for purposes of website accessibility
Log In Help Join The Motley Fool
Free Article Join Over 1 Million Premium Members And Get More In-Depth Stock Guidance and Research
By John Rosevear – Jul 22, 2020 at 10:33AM

Fiat Chrysler Automobiles (FCAU) and Waymo said that they will work together to develop and build a series of self-driving commercial vans, the two companies announced in a statement on Wednesday.

The collaboration will begin with the integration of Waymo Driver into FCA's Ram ProMaster commercial vans, the companies said. 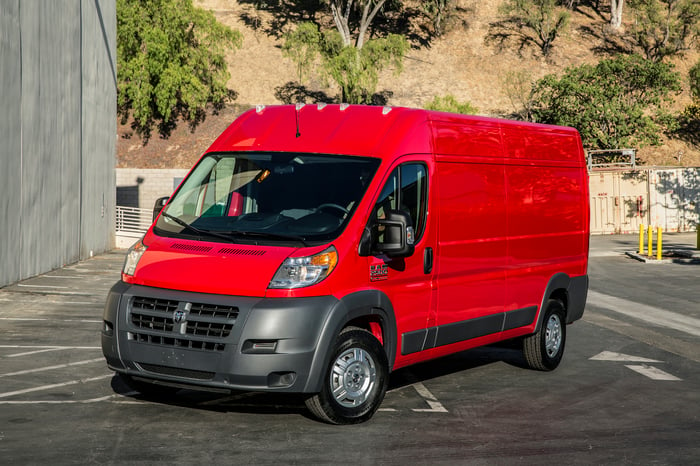 A Level 4 autonomous-vehicle system is one that is fully self-driving when certain conditions are met. In practice, those conditions are typically geographic: Waymo Driver, like most Level 4 systems under development now, will only operate within defined areas that have been carefully mapped. The system may also be restricted from operating in severe weather conditions.

Waymo, the Alphabet (GOOG -1.39%) (GOOGL -1.40%) subsidiary that began as the Google Self-Driving Car Project, and FCA have been working together since 2016, when FCA agreed to build a version of its Chrysler Pacifica minivan that incorporated what was then a prototype of Waymo's Level 4 automated-driving system.

In a statement, Waymo CEO John Krafcik confirmed that his company will work with FCA to roll out a series of vehicles incorporating the Waymo Driver system. The vehicles will include models tailored for ride-hailing and commercial-delivery applications, as well as personal use by individual consumers.

The companies haven't yet shared details of the timeline for these products. FCA may provide more specifics during its second-quarter earnings call on July 31.