To say 2020 has been a challenging year for Occidental Petroleum (NYSE:OXY) would be an understatement. Shares of the oil giant have plummeted 60% on the year because of the impact the oil market downturn has had on its operations and balance sheet. Market conditions have gotten so bad that some have wondered whether the company might end up going bankrupt before the year is over.

Those fears have faded in recent months as oil prices recovered, and Occidental took steps to shore up its financial situation. If those trends continue, shares could have more upside ahead, which is leading bargain-hunting investors to wonder if the stock is now worth buying. Here's a look at the case for and against buying Occidental Petroleum right now. 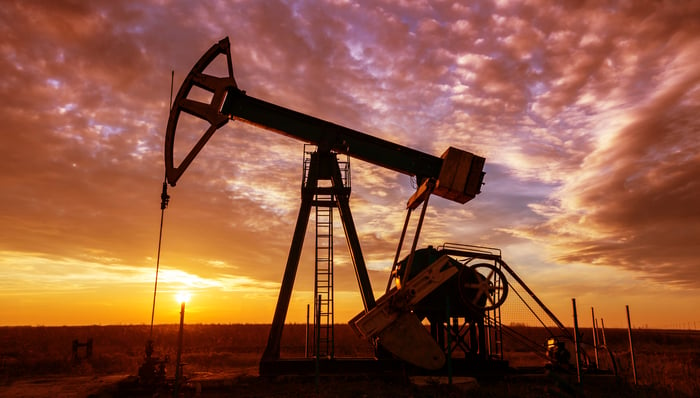 The bull case for Occidental Petroleum

While Occidental's stock has tumbled this year, shares have bounced back sharply over the past couple of months. Three factors have fueled the company's rebound.

First, oil prices have improved significantly, thanks mainly to OPEC and Russia, which sealed a historic agreement to support the oil market in April. The primary U.S. oil price benchmark, West Texas Intermediate, has recently reclaimed the $40-per-barrel level. That's noteworthy because Occidental's cost reduction efforts this year pushed its cash flow breakeven level to around $30 WTI, meaning it can generate free flow in the current environment, giving it some money to pay down debt.

Speaking of debt, Occidental has made several moves to address its balance sheet issues. One of them was issuing $2 billion of high yields bonds that mature over the next five to 10 years, which allowed it to redeem some of the debt coming due next year. That helped lower its upcoming debt maturity wall.

Those positives have analysts growing more bullish on Occidental's prospects. For example, SunTrust upgraded the stock in mid-June from hold to a buy on the view that it could produce nearly $4 billion of free cash in 2021. Meanwhile, Bank of America made a similar move earlier last month with the same thesis, though it expects the company to produce $7 billion in free cash through the rest of this year and 2021. Finally, Raymond James reiterated its "strong buy" rating last month on its view that Occidental trades at a 9% free cash flow yield for 2021 and that asset sales will soon be a realistic option for the company thanks to improving oil prices. Those dual fuels could give it the cash needed to shore up its balance sheet.

The bear case for Occidental Petroleum

The main issue with Occidental Petroleum remains its troubling financial situation. Last year's purchase of Anadarko Petroleum saddled it with about $40 billion in debt. The problem isn't the size of its debt but the amount maturing over the next couple of years. While Occidental doesn't technically have any debt coming due this year, holders of $992 million in bonds that mature in 2036 could force the company to repurchase them this October. The more pressing concern is debt maturing in 2021 and 2022, which totaled more than $11 billion, though the company's recent refinancing reduced that number by $2 billion. That still leaves it with a lot of debt to address over the next two years.

As long as oil prices remain over $40 a barrel, Occidental Petroleum should be able to continue chipping away at that debt via free cash flow and asset sales. However, if oil takes another nosedive, it could struggle to address this debt. In a worst-case scenario, it might have to restructure in bankruptcy. While that risk is much lower than it was earlier this year, it hasn't completely disappeared.

Still way too risky to buy

If the oil market continues to recover, Occidental should generate the cash needed to shore up its balance sheet. That would help lift the weight holding down its stock price.

However, the market remains fragile since OPEC is propping it up until demand rebounds, which could take quite a while. So prices are likely to remain volatile, which could affect Occidental's plan. That puts it at high risk of an adverse outcome, making it an unattractive oil stock to buy, especially when there are better options available.