Restaurant Brands International (NYSE:QSR) is among the more ambitious fast-food companies out there.

Formed by the merger of Burger King and Tim Hortons in 2014, the deal was engineered by Brazilian investment firm 3G Capital and Warren Buffett's Berkshire Hathaway. In 2017, the company acquired Popeyes Louisiana Kitchen, giving it a triumvirate of brands to rival Yum! Brands, the parent of KFC, Pizza Hut, Taco Bell, and Habit Restaurants. Restaurant Brands also now counts Bill Ackman's Pershing Square as one of its backers, adding to its list of respected investors.

As you can see from the chart below, Restaurant Brands had outperformed the S&P 500 for much of its history until the coronavirus pandemic hit. 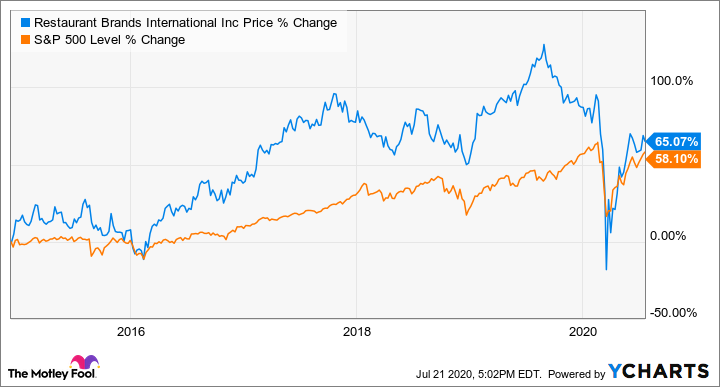 Like other restaurant operators, Restaurant Brands International (RBI) is facing some challenges, but it's also seen a surge in sales at its Popeyes chain thanks to its hugely popular chicken sandwich. Let's take a look at where RBI stands today to determine if it's a buy.

Fast-food chains have fared better than their casual-dining peers during the pandemic, as the majority of fast-food orders are to-go and these chains can also take advantage of their drive-thrus, which automatically create social distancing. After the initial stocking-up period, consumers also seemed to flock back to fast-food chains for their taste of comfort food.

Restaurant Brands has not yet reported second-quarter earnings, but in the first quarter, Popeyes' carried the company. Systemwide sales for Restaurant Brands were flat, but at Popeyes they surged 32% on the strength of its chicken sandwich;comparable sales at the fried chicken chain were up 26%. At Tim Hortons, on the other hand, comps fell 10.3% as breakfast traffic suffered from stay-at-home orders, and Burger King saw comps decline 3.7%. Earnings per share slipped from $0.53 to $0.48.

Like other restaurant chains, Restaurant Brands has extended terms to franchisees and borrowed money to strengthen its liquidity, but the company appears to be in a solid position compared to its peers. On the earnings call, CEO Jose Cil told investors that sales had steadily climbed through April, and reports from other restaurant chains have shown the recovery continuing through the spring. In fact, in an update, the company said Popeyes' U.S. comparable sales were up in the low 40% range in the third week of May, though Tim Hortons' Canada comparable sales were still down in the mid-20% range. At Burger King, comps in its home market were down mid-single digits. All three brands had seen significant improvement from the second half of March.

RBI currently trades at a price-to-earnings ratio of 24.5, below the S&P 500's at 28. As of the end of March, the company had nearly $13 billion in debt and $2.5 billion in cash after its recent financing round, which should help it weather any further uncertainty around the crisis. The fast-food operator also offers a dividend yield of 3.7%, which it seems committed to paying, as it authorized its regular dividend in June.

Beyond the challenges of the pandemic, the company is squarely focused on growth. It's rapidly expanded the Burger King franchise, adding more than 1,000 locations globally in the last year. Further, the surge in sales at Popeyes bodes well for the growth of that brand, especially with the buzz around the chicken sandwich. In fact, the opening of the first Popeyes location in China in May was greeted with crowds and long lines despite the coronavirus pandemic. Popeyes plans to open 1,500 locations in China over the next decade, and based on its early reception and the success of KFC there, the brand could just be starting to capture a huge opportunity in the world's most populous country. With only about 2,000 stores in the U.S., Popeyes also has plenty of room for expansion at home.

Restaurant Brands has proven its ability to outperform the market with solid growth before the pandemic, and its rapid expansion of Burger King and innovation at Popeyes with the chicken sandwich is encouraging as well. Though the company faces challenges at Tim Hortons, performance at the coffee chain should improve as businesses begin to reopen and workers start commuting again. RBI is also on the lookout for new acquisitions, and a fourth brand could move the needle as well, much like Popeyes appears to be doing now.

Given those prospects and a solid dividend paying 3.7% during an uncertain time, Restaurant Brands looks like a solid buy. Despite the current challenges, the fast-food operator has what it takes to outperform the market over the long term.