A surge in tissue demand in North America due to the coronavirus pandemic helped Kimberly-Clark (NYSE:KMB) overcome weaker sales in international markets and in its professional products business, allowing it to trounce Wall Street earnings estimates.

The company's second-quarter results, released Thursday, also gave Kimberly-Clark the confidence to reinstate guidance for the rest of the year and to resume its stock buyback program, both of which had been suspended in April due to the COVID-19 outbreak. 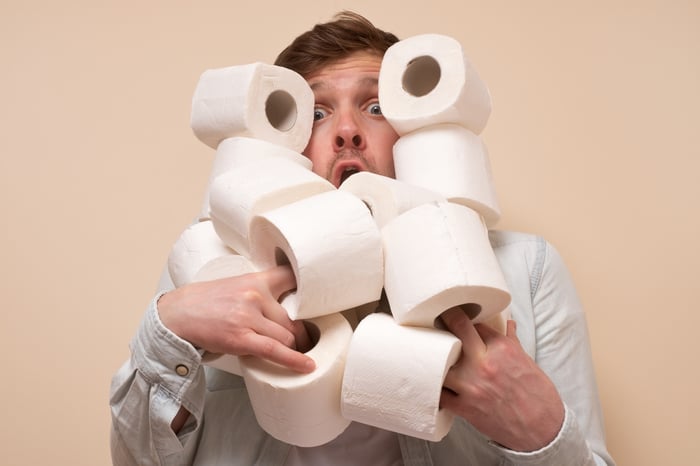 Anyone who shopped during the early days of the pandemic knows that among the first things that disappeared from supermarket shelves were paper products like toilet paper and paper towels. Kimberly-Clark owns some of the biggest brands in those segments, including Scott, Kleenex, and Cottonelle.

Division sales jumped 12% for the period on a 14% rise in volume, with currency exchange rates swiping 3%. Operating profits, however, nearly doubled, rocketing 94% higher to $428 million.

That was more than enough to overcome the 8% drop in sales outside of North America, 9% decline in emerging market sales, and 12% decrease in the professional segment, which sells its products to businesses.

The overall results saw Kimberly-Clark easily surpass analyst expectations. Where Wall Street had forecast $1.80 per share in earnings on $4.46 billion in sales, the consumer products giant turned in $2.20 per share on $4.61 billion in revenue.

Kimberly-Clark also said while uncertainty remains because of the pandemic, it is issuing guidance again and believes net sales will grow 1% to 2% for the year with a 6% to 9% increase in operating profits.

It will also reboot its share repurchase program and expects to buy between $700 million and $900 million worth of stock by year's end.