Buying a stock near all-time lows is only a good idea if it's about to go up.

Fast-casual restaurant chain Noodles & Company (NDLS 2.00%) was one of the hottest IPOs in 2013. The stock priced at $18 per share but doubled in value its first day on the stock market.Investors were initially comfortable giving the company a $1.2 billion valuation, hoping for stellar returns as the company expanded to 2,000 locations long-term.

It's been a disastrous investment. Noodles & Company stock peaked around $50 per share in 2013. Today it wallows around $6 per share. Granted, it's nearly doubled from lows hit in March. But after seven years, it's still down 67% from where its IPO priced, and it's down 84% from where shares started trading. 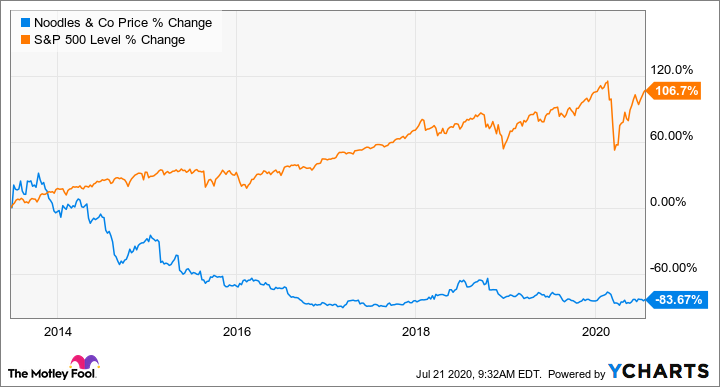 However, buying stocks at a low price is a good strategy if they're set to soar. So is Noodles & Company stock a buy when it's hovering near seven-year lows?

At the time of its IPO, Chipotle Mexican Grill (CMG -0.07%) had high average unit volumes (AUV) of $1.4 million, consistent annual comparable-sales growth, had just become profitable, and was primarily company-owned. Chipotle would go on to crush the market.

Noodles & Company had similar, promising qualities at IPO. It had AUV of $1.2 million, comp-sales that had increased 5% in 2012, and increasing profitability, and 86% of locations were company-owned. 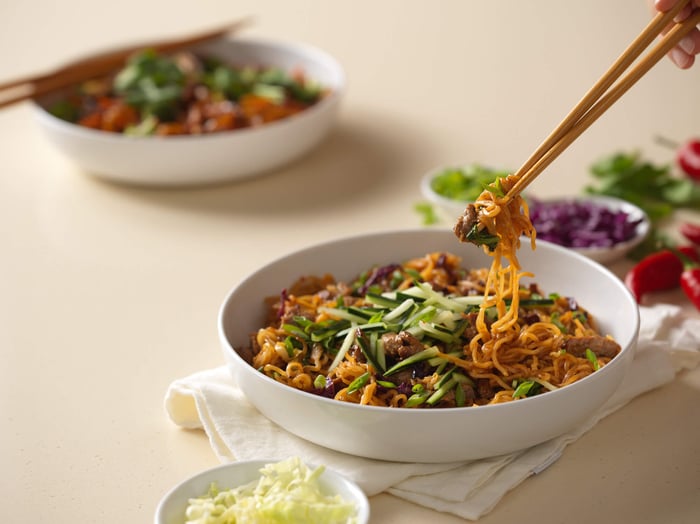 This all looked good, and investors were understandably optimistic. However, at the end of 2013 Noodles flashed a warning signal that many investors overlooked. Comparable sales increased 3.4% for the year, which was good. But the company's AUV stayed flat. If sales by location increase 3%, then you'd expect AUV to also increase proportionally.

Noodles & Company, however, doesn't define comparable sales the same way as Chipotle. Chipotle restaurants enter the comparable-sales base after 13 months, while Noodles waits for 18 months. It turns out Noodles was rapidly expanding with underperforming new locations, but they didn't show up in the comp-sales base for some time. That's how its AUV stayed flat despite increasing comp-sales. As soon as these new locations entered the comparable-sales base, Noodles' financial results began to paint a less rosy picture.

Comparable sales and AUV fell for Noodles from 2015 through 2017 as these lackluster stores entered the financial picture. And yet, Noodles stubbornly continued expanding, topping out at 532 locations at the end of 2016. Since then, the company has finally closed bad locations, which has helped some in recent years. However, its AUV in 2019 is only 1% higher than its AUV in 2011.

Nowadays, Chipotle's AUV has increased to $2.2 million. And higher volume results in operating leverage. In its first-quarter earnings call, Chipotle's CFO said that for every $100,000 increase in sales volume, its profit margin increases by 1%. This is why Chipotle has become such a shareholder-enriching cash cow. 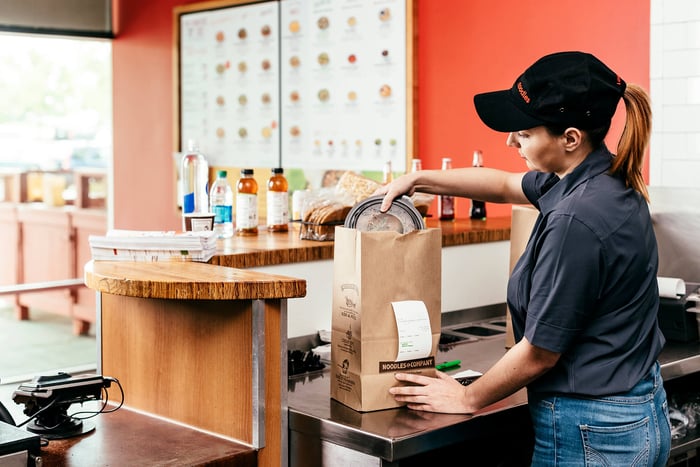 First, Noodles & Company needs to increase its profitability. It could do this by growing AUV like Chipotle. Many of its restaurant peers have accomplished this by growing their to-go businesses. However, over 60% of Noodles' sales are already off-premise sales -- and that was before the COVID-19 pandemic. Off-premise sales have likely increased even more since then.

Since Noodles' off-premise business is already so strong, it's hard to think of a lever it can pull to meaningfully grow AUV. Therefore, the company needs another path to grow profitability.

Perhaps it could grow profitability by reducing expenses. To that end, management had already laid out plans to redesign its kitchens to increase efficiency and boost margins. However, it's now so preoccupied with the coronavirus that this year's kitchen redesign has been delayed. So this is also out for now.

Bottom-line growth is ideal, but top-line growth would also be good for Noodles. The company was planning to open new locations this year, but most of the planned openings for 2020 have now been delayed. New restaurants are the primary top-line growth driver for this chain. So don't expect much here either in the near term.

With minuscule opportunity to grow revenue and profit, I don't believe Noodles & Company is a good value stock today. This is a company trying to stage a comeback. The plan of redesigning the kitchen and returning to unit growth looked promising. But the coronavirus has put these important tasks on hold. Therefore, investors should wait.

I'm not suggesting Noodles is in danger of going under. On the contrary, management says the company won't be burning cash even if comparable sales are down 20%. The company hasn't updated lately, but comp-sales likely aren't down that far, so it should survive COVID-19. However, I would stay on the sidelines here until the company actually starts executing its turnaround plan and those efforts begin bearing fruit.

Why Noodles & Company Stock Rocketed 23% at the Open Today