Hobbi was never meant to kill Pinterest, but its abrupt death is a vote of confidence for pinboard-based social network.

Facebook (META -1.69%) launched Hobbi, an app for curating interests and activities, to challenge Pinterest (PINS -2.67%) back in February. However, the app was only downloaded about 7,000 times in the U.S., according to Sensor Tower, and Facebook quietly killed it off on July 10.

Facebook's attempt to clone Pinterest wasn't surprising since the latter has carved out a defensible niche in the social networking market with its virtual pinboards. Pinterest's monthly active users (MAUs) grew 26% annually to 367 million last quarter as its total revenue rose 35%, indicating it still has plenty of room to run.

Let's examine the three main reasons Facebook's Hobbi failed to gain any ground against Pinterest, and what its failure might mean for Pinterest's future. 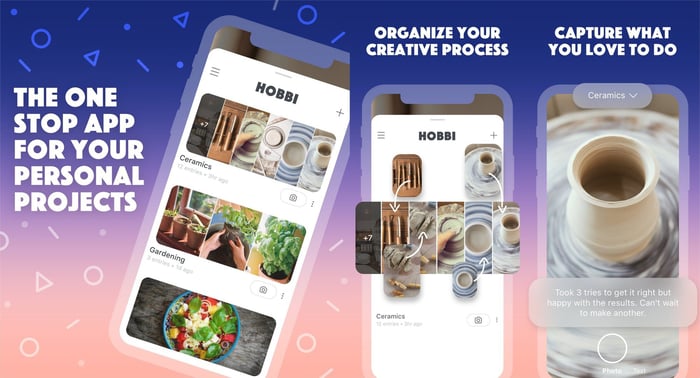 1. It was an experimental project

In a blog post, Facebook stated that the NPE unit's goal is to quickly test out ideas "by creating small, focused apps in order to see whether people find certain features useful or engaging." It says those apps will "change very rapidly" and "be shut down if we learn that they're not useful to people," and anticipates "many failures" along the way.

That's why the NPE Team quietly rolled out Hobbi five months ago instead of loudly launching it as an official Facebook or Instagram product. In other words, Facebook probably never expected Hobbi to challenge Pinterest.

Pinterest was founded over 10 years ago, and it gained a loyal base of users who wanted a platform for simply sharing hobbies, interests, and ideas instead of personal photos and posts.

That focus, along with Pinterest's image-oriented platform, differentiated it from Facebook and other social networks. It also made it a natural platform for travel, home decor, and fashion ads, which convinced many companies to craft "shoppable" pins or upload their entire catalogs to the platform.

Hobbi couldn't gain a foothold in this market because users already associated "pinning" interests with Pinterest, and most of their friends, followers, and favorite brands were already on the platform. There simply wasn't any reason to start new collections on a new platform.

Pinterest listed Instagram as a major competitor in its IPO filing last year, noting it offered "shoppable" posts and allowed users to "create collections" by bookmarking and saving images.

However, a survey by Cowen & Co. in early 2019 found just 10% of Instagram's users used the app to find and shop for products, compared to 48% of Pinterest's users. But Instagram is still an image-focused platform with a much larger audience of over a billion MAUs, making it a more natural competitor for Pinterest than a stand-alone app like Hobbi.

For example, Facebook's NPE unit recently killed off Lasso, an experimental clone of ByteDance's TikTok, to focus on launching a TikTok-like "Reels" feature for Instagram instead. That move suggests Facebook could add other Pinterest-like features to Instagram instead of launching other stand-alone apps.

Snap and Tiktok pulled away younger users with their ephemeral messages and short videos, while Pinterest attracted older users, especially women with children (who accounted for 80% of its users last year), with its interest-based pins.

Facebook couldn't kill Snap and TikTok, and it's doubtful it will do much damage to Pinterest, even if it clones and bakes more of its features into Instagram. In short, Hobbi's death is yet another vote of confidence for Pinterest and its long-term growth potential in the crowded social media market.