COVID-19 is slowing industrial production -- and lowering demand for railcars.

Shares of Trinity Industries (TRN -0.52%) were down 9% as of 3 p.m. EDT, after the railcar manufacturer reported disappointing quarterly results. There were some silver linings in the results, but investors on Thursday were more focused on what went wrong over the last three months.

After markets closed Wednesday, Trinity reported adjusted earnings of $0.02 per share on revenue of $509 million. The company fell short of Wall Street's $0.10 per share earnings estimate, despite beating the $459 million revenue consensus. 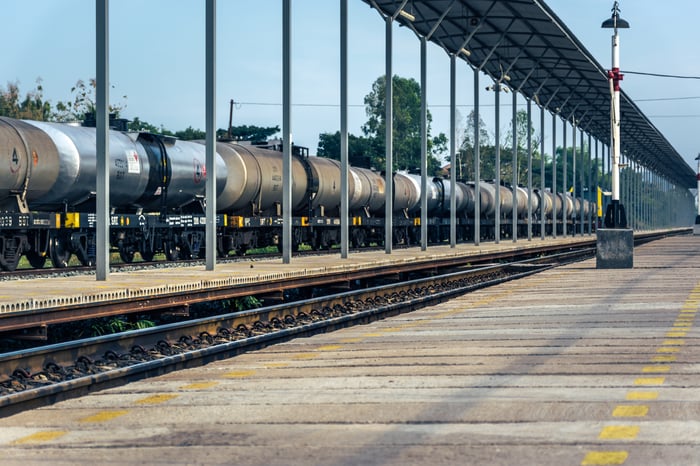 The company has been hit hard by the COVID-19 pandemic, which has eaten into industrial production and, with it, demand for railroad cars. The pandemic has also added to expenses as Trinity tries to keep its employees safe. While Trinity's car leasing operation held up surprisingly well, with nearly 95% of the fleet utilized during the quarter, the company appears to have made significant rate concessions to keep the utilization up.

"Our businesses are facing challenging market dynamics resulting from the historic decline in railcar loadings and the resulting underutilized railcars in North America," CEO Jean Savage said in a statement. "The timeline for a recovery in the rail sector remains unclear as increasing COVID-19 cases in the U.S. potentially threaten the recent improvement in economic and rail market activity."

Savage said that Trinity is seeing "a strong increase in railcar inquiries relative to last quarter," providing at least some hope that demand is beginning to recover. However, with the pandemic far from resolved and some regions of the U.S. making plans to limit activity again in response to a spike in new COVID-19 cases, it's far from certain that demand will hold.

Management is not standing still, saying it expects that a round of cost reductions already begun will generate about $70 million in future annualized cost savings. And the company believes it will be able to identify further cost-cutting opportunities in the months to come.

Trinity is a good business caught in a difficult period for the industrial economy. It seems unlikely the uncertainty surrounding this stock will lift any time soon.

Here's Why Shares of Trinity Industries Dropped on Thursday
401%