There's no escaping it. Digital has taken over retail shopping, and it's here to stay. Companies that anticipated the digital revolution, such as Amazon.com, were best prepared and benefited the most. But most companies that have gotten on board have been seeing positive results from their efforts. In fact, this has been the saving grace of many companies throughout the pandemic, when they saw sales declining, but digital sales rising. Some examples are Nike and American Eagle Outfitters.

So where does this leave the TJX Companies (NYSE:TJX)?

TJX, parent brand of T.J.Maxx, Marshall's, and Home Goods discount chains, has proudly explained that it has a sustainable model that has withstood several recessions and is set up to get through COVID-19 as well. It has a solid supply stock with an abundance of merchandise, and its low prices appeal to mass consumers. 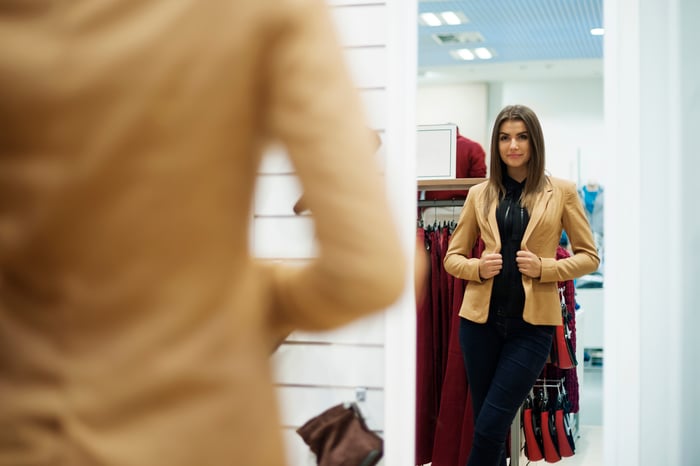 This operation works best in-store, because merchandise changes rapidly and there aren't loads of any particular item. This contributes to the treasure hunt feel of the discount store and invites customers in on a frequent basis to see what finds are there on any given day.

Until the pandemic, this worked for TJX, which was able to keep sales climbing despite not having a strong digital network. But the company got crushed while stores were closed and the little e-commerce program the company has was temporarily shut down as well.

Management didn't seem too worried during the third-quarter conference call in May, and it optimistically pointed to the amazing merchandise that will flow into stores as a result of other retail failures. And this is likely to be the case.

The more troubling subtext is what this means for the future.

Will TJX survive without a robust digital program?

The company's claims that it has flourished during previous recessions don't take into account the current retail atmosphere, where digital has become a normative way of shopping. Retail trends indicate that shoppers are either moving online or to smaller stores. This is best seen in the case of large department stores such as Macy's, which is struggling and downsizing, and J.C.Penney, which has filed for bankruptcy.

TJX's stores don't fall into any of these camps -- the digital masters, the boutique-style, or the large and clunky. Does that mean it's immune to the new trends?

Let's check out how TJX's revenue has been doing over the past four quarters.

TJX doesn't break out its online sales, like most companies that have a strong digital backbone, because they're a small portion of the total, and in the most recent quarter they ceased entirely for a few weeks. So while there was solid growth until the lockdown, will overwhelmingly in-store sales continue be high enough to preclude becoming endangered as digital comes center stage?

While we can't predict whether or not TJX will thrive without a strong digital arm, the data is all pointing toward digital becoming ever more important for retailers.

It would be a mistake to ignore where retail trends are heading and consider COVID-19 a one-time blip. Although sales picked up in TJX's stores as soon as they opened, the landscape is changing, and market leaders such as Kodak have gotten burned when they didn't face new realities. More recently, experts once said Amazon would never stand a chance next to Walmart, but Walmart sat back and relaxed while Amazon slowly and steadily won the race. It took a long time for Walmart to get back into the digital ring.

TJX CEO Ernie Hermann took that into account and opened the Marshall's e-commerce branch in 2019. To deal with some of the inherent issues in putting this type of business online, the company is offering up a different mix of merchandise that fits better with a digital model. This, however, operates differently than the unique model of TJX, so it needs to stand out for some other reason to be successful.

Hermann told The Wall Street Journal: "We plan to continue growing e-commerce strategically." That's optimistic, and hopefully "strategically" isn't a synonym for "slowly," which is what contributed to the ongoing struggle at Bed, Bath and Beyond.

TJX is a great company, but it may need to reevaluate its relationship with e-commerce to continue its stellar record.