Proto Labs (PRLB 3.39%), a quick-turn contract manufacturer, is slated to report its second-quarter 2020 results before the market open on Tuesday, July 28.

The company -- which offers both traditional manufacturing and 3D printing services -- will kick off the quarterly earnings season for the 3D printing space. The two largest pure-play 3D printing companies, 3D Systems and Stratasys, are both scheduled to release their results on Aug. 5.

Investors will likely be approaching the report with caution. It's a given the company's results were hurt by the COVID-19 pandemic since many of its industrial customers were shut down during at least part of the quarter. 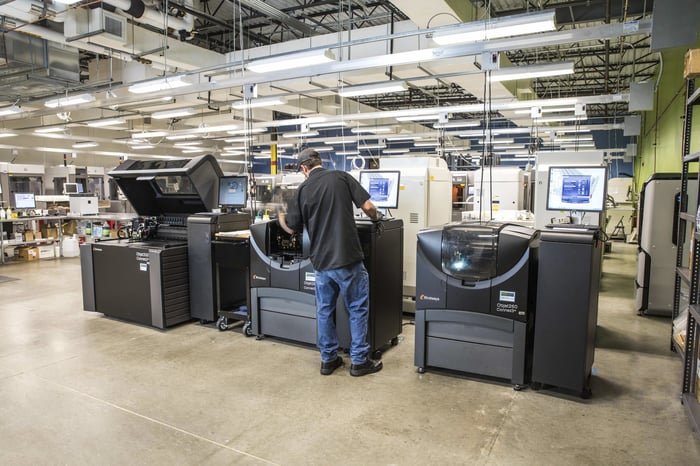 That said, last quarter, Proto Labs easily surpassed Wall Street's profit estimate, so there's reason to believe that it might surprise to the upside again this quarter.

Here's what to watch in Proto Labs' report.

Given the uncertainties surrounding the pandemic, management didn't issue quarterly guidance, as it historically has. However, on the April 30 first-quarter earnings call, CFO John Way provided some data on April's results, which we'll get to in a moment.

For context, in the first quarter, Proto Labs' revenue edged up 1.5% (or 2% in constant currency) year over year to $115.1 million. Growth was driven by increases in the 3D printing and sheet metal businesses, which was offset by a decline in the plastic injection molding business, the company's largest segment. CNC machine results were flat with the year-ago period.

The company's balance sheet remains strong. It generated $22.4 million in cash from operations during the first quarter, and ended the period with cash and equivalents of $91.9 million.

Here's how CEO Vicki Holt described the pandemic's effect on the first quarter:

During the first two and a half months of the first quarter of 2020, ordering trends were in-line with our expectations. In mid-March, as the global pandemic intensified and economic activity declined, ordering activity slowed. In the last week of March, we began to receive orders for COVID-19 related parts -- primarily injection molding in the Americas -- which helped mitigate the slowdown in other services and regions.

The market looks ahead, so its reaction to Proto Labs' earnings release will probably hinge more on the company's outlook rather than its Q2 results, relative to Wall Street's expectations.

For Q3, analysts are currently modeling for adjusted EPS of $0.41 on revenue of $104 million, representing declines of 46% and 11.5%, respectively, year over year.