Beyond Meat (NASDAQ:BYND), the leading maker of plant-based meat substitutes, is slated to report its second quarter 2020 results on Tuesday, Aug. 4, after the market close. An earnings call is scheduled to follow at 4:30 p.m. EDT.

Investors are probably approaching the report with optimism and hoping for a repeat of the first quarter. In that quarter, the company crushed Wall Street's earnings estimate, resulting in the stock rocketing 26% higher the day after the release.

Last quarter, the COVID-19 pandemic hurt the company's foodservice distribution channel because of temporary restaurant closures; however, the crisis boosted sales in its retail channel. Many consumers stockpiled food, particularly sources of protein.

We can expect that a similar dynamic played out in the second quarter, though it should be more pronounced. In the first quarter, the pandemic's effect on demand was largely limited to just the last half of March. 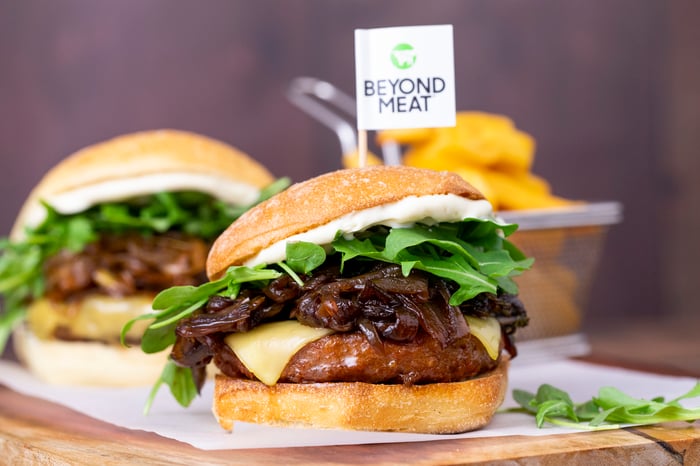 The bottom-line performance was particularly impressive, given the company incurred expenses associated with keeping production employees as safe as possible from the novel coronavirus.

Last quarter, retail sales accounted for about 58% of total revenue. That number should increase in the second quarter since the pandemic likely continued to provide a headwind to overall foodservice sales and a tailwind to overall retail sales.

That said, the company's launch in China (which occurred in the foodservice channel) during the early part of the quarter should help counteract the headwind to international foodservice sales.

Management is likely to provide some color on how its partnership with coffeehouse giant Starbucks (NASDAQ:SBUX) in China is progressing.

As background, on April 20, Starbucks announced that it was introducing three Beyond Meat dishes to its menu in China starting on April 22. This partnership marked Beyond Meat's entrance into the Chinese market.

Last quarter, the company pulled its 2020 guidance in light of the uncertainty surrounding the pandemic. Hopefully, on the earnings call, management at least provides some color on its outlook.