Biogen (NASDAQ:BIIB) saw its stock jumped after the company released its second-quarter results on Thursday. The biotech beat analysts' earnings estimates for the fifth consecutive quarter with diluted earnings per share (EPS) based on generally accepted accounting principles (GAAP) increasing by 22% year over year. The company revised its full-year financial guidance as well. Biogen estimates that its GAAP diluted EPS will be between $32 and $34 rather than the prior estimated range of $29.50 to $31.50.

But Biogen's stellar earnings figures belie other problems. Its total product revenue dipped 4% from the prior quarter.  The biotech spent $225 million to purchase Sangamo Therapeutics stock, and added an additional $83 million in research and development (R&D) premiums associated with the purchase.

With Biogen's revenue from drug sales slipping, how did the company to exceed earnings expectations? By leveraging the company's core competencies in manufacturing and making fruitful investments in research collaborators. 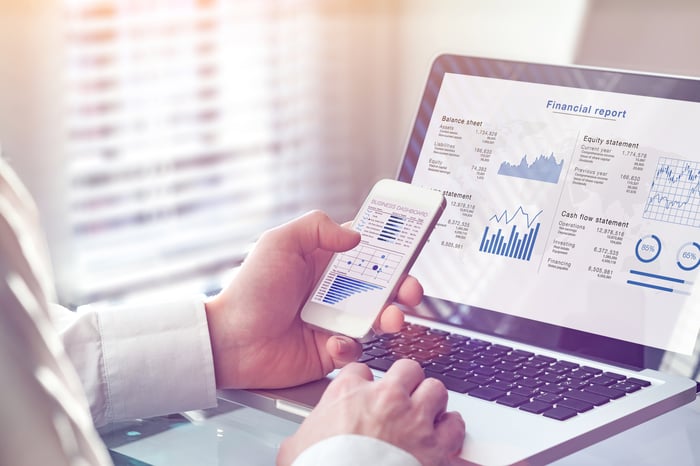 Despite the strong earnings growth, Biogen's sales figures were a mixed bag. The company earned 2% less from its multiple sclerosis drug, Ocrevus, than in 2019. Similarly, revenue from sales of spinal muscular atrophy drug Spinraza increased by only 1% compared to last year. Revenue from biosimilars dropped by 7%. Among its biosimilar products, revenue from Imraldi plummeted by a shocking 27% compared to the first quarter of the year, and revenue from Benepali fell by 20% in the same period.

Biogen stated that its first-quarter sales revenue was buoyed by $100 million as a result of changes in purchasing habits in its European markets relating to the pandemic. However, it didn't elaborate on the specifics, making it hard to predict whether investors can expect a similar bump next quarter.

In contrast to its sales revenue, revenue from the licensing of manufacturing intellectual property (IP) exploded by 155% compared to the prior year, growing by $330 million to a total of $408 million. While Biogen didn't specify which of its collaborators licensed the IP, Roche might fit the bill based on the size of the revenue and the scale of the cooperation with its anti-CD20 therapeutics programs. The fact that Biogen's manufacturing-related IP could drive such a large increase in revenue is evidence that the company is capable of extracting a substantial amount of cash from more than one segment of its pharmaceutical product value chain without liquidating any of its productive assets.

Investments in Sangamo and Ionis pay off, but so far only on paper

Another piece of the better-than-expected earnings puzzle is that Biogen reported $103 million in unrealized gains on its equity investments in Sangamo and Ionis Pharmaceuticals, clinical-stage collaborators in the company's Alzheimer's disease and ALS pipeline programs, respectively. Investing in collaborators is important, especially since the company wants to eventually commercialize the associated drugs in development, but it doesn't result in any additional cash on hand.

It's possible that these unrealized investment gains could help to mitigate losses from falling biologics revenue for the next few quarters. Don't be surprised if Biogen doubles down and purchases more equity.

Biogen's earnings indicate that the company is thriving despite difficult market conditions and the absence of any new product releases. Keep an eye on its investing and licensing activities. The biotech stock might be worth buying next quarter if its biologics sales stabilize.