From what you've heard in the news, you might get the idea that investors who use the Robinhood trading app don't stand a chance of making money. It's true that some day traders use Robinhood as their platform, and some of their favorite stock picks leave much to be desired.

However, when you look more closely at the stocks that Robinhood investors are most likely to own, you'll get a much clearer picture of what, in reality, is a well-balanced set of companies. In fact, among the top half-dozen stocks on Robinhood's popularity list are three strong businesses that have seen their shares soar over the long run. Below, we'll take a closer look at these well-known companies.

Disney has all the things that investors of all ages and skill levels can appreciate. Nearly everyone has some connection to its businesses, whether it's the ABC and ESPN television channels, its iconic theme parks, its retail merchandise stores, or the movies that helped make it famous. Now that studios like Marvel, Pixar, and Lucasfilm have joined the namesake Disney colossus over the years, many of the blockbuster hits of the past several decades trace back to the House of Mouse.

Lately, the COVID-19 pandemic has hurt a significant portion of Disney's business, as theme parks have only recently started to reopen in key areas. Many movie theaters have suspended operations, and sporting events have come to a standstill. Yet over the long run, people will still want to be entertained, and Disney has made smart moves to adapt to rapidly changing conditions. Robinhood investors with fond memories of Disney are betting that the company can bounce back quickly, and the way its stock price has behaved lately supports that view. 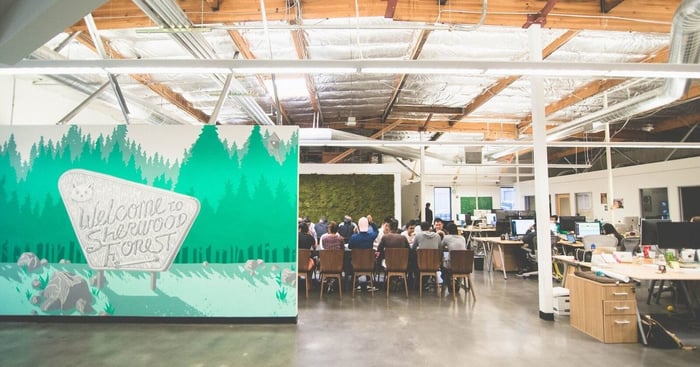 It's a reasonable guess that many of the investors who use Robinhood on their mobile devices bought those devices from Apple. Between iPhones, iPads, Apple Watches, and Mac computers, Apple has made a huge contribution to the digital revolution. That makes Apple a natural pick for investors wanting to cash in on that success.

Helping Apple is the fact that its stock has soared both in 2019 and so far in 2020. Even as economic worries linger, the need for people to work remotely has made them even more dependent on their smartphones, tablets, and laptops than ever before. That trend isn't likely to reverse itself, even when the COVID-19 pandemic starts to run its course, and that bodes well for Apple's long-term future.

Soaring into the cloud

Microsoft is also an obvious pick for tech-savvy app traders using Robinhood. The software giant has transformed itself in recent years. After largely discarding its aspirations to build a closed ecosystem for its products, it's embraced the recurring revenue available from offering cloud-based versions of its popular office productivity software and other platforms to users on a subscription basis. CEO Satya Nadella was instrumental in this transformation, and the company has a lot further to go.

Microsoft has identified plenty of high-growth areas, and it's making big plays in many of them. From the workplace collaboration software package in Microsoft Teams to forays into cybersecurity and the internet of things, the Redmond-based tech behemoth has a promising future ahead of it. It's hard to blame Robinhood investors for wanting to be part of that.

Don't make the mistake of thinking that everyone who uses Robinhood's trading app is unsophisticated and making bad decisions. The hundreds of thousands of users who are buying shares of Microsoft, Apple, and Disney are making good use of the investing tool. These growth stocks are worthy of your consideration, as well.