Please ensure Javascript is enabled for purposes of website accessibility
Log In Help Join The Motley Fool
Free Article Join Over 1 Million Premium Members And Get More In-Depth Stock Guidance and Research
By Keith Speights – Jul 26, 2020 at 8:34AM

These stocks have delivered gains of 2,300% and more. But could they go even higher?

Many companies' business prospects have been hurt as a result of the COVID-19 pandemic. Lockdowns and general public wariness about being infected by the novel coronavirus have taken a toll. But there are also some companies that have seen their business prospects soar due to the viral outbreak -- and their stocks skyrocket.

A handful of stocks have even delivered staggering year-to-date gains of 2,300% or more. Here are the three best-performing coronavirus stocks so far in 2020. 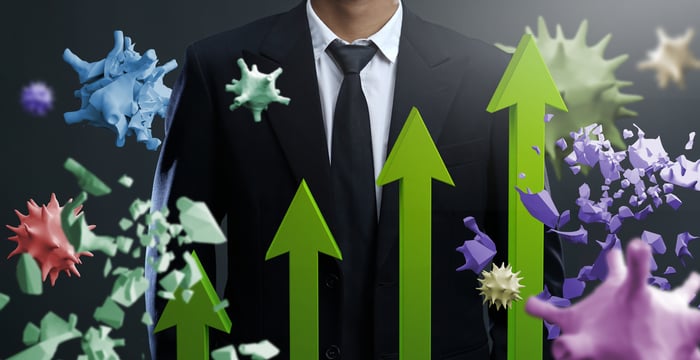 Vaxart (VXRT -3.67%) ranks as the biggest winner of the year so far among stocks of companies with COVID-19 programs. The biotech stock is up a whopping 3,400%. Just a few weeks ago Vaxart was more than 4,700% higher year to date.

There are two reasons for Vaxart's tremendous rise. First, the biotech started out in 2020 with a really low market cap of around $17 million. Tiny stocks tend to generate bigger jumps on good news. Second, Vaxart had some really good news.

In late January, Vaxart announced plans to develop an oral vaccine against the novel coronavirus. Within three months, the company reported encouraging results from preclinical testing of its COVID-19 vaccine candidate. Its stock had risen so much in the interim period that Vaxart joined the Russell 3000 index. Vaxart's efforts were also rewarded in June with the U.S. government's Operation Warp Speed selecting its oral COVID-19 vaccine candidate to be part of a challenge study with non-human primates.

Novavax (NVAX -6.42%) trails closely behind Vaxart. The biotech's shares have skyrocketed close to 3,300% this year.

The company announced in late February that it was evaluating multiple COVID-19 vaccine candidates. By early April, Novavax had a candidate selected and began planning to start a phase 1 study in May. That clinical trial kicked off on May 25. Just a couple of weeks earlier, Novavax secured up to $388 million in funding for its COVID-19 vaccine program from the Coalition for Epidemic Preparedness Innovations. In July, the biotech won $1.6 billion in funding from Operation Warp Speed.

Novavax's COVID-19 vaccine candidate hasn't been its only growth driver in 2020, though. The company also reported positive results in March from a late-stage study of flu vaccine candidate NanoFlu. Novavax is now preparing to file for regulatory approval of its experimental flu vaccine.

Don't think that all of the year's winners have been biotechs developing coronavirus vaccine candidates. Co-Diagnostics (CODX 5.23%) stock is up more than 2,300% so far in 2020. And the company doesn't have any experimental drug or vaccine in development.

Sales quickly gained momentum. So did Co-Diagnostics stock. In June, the company was added to the Russell 2000 and Russell 3000 indexes.

It's entirely possible that all three of these coronavirus stocks could keep up their winning ways throughout the rest of 2020 and into next year. However, I think that only one of them is a stock to buy right now.

My concern for Co-Diagnostics is that its valuation could be too steep for a small company that faces significant competition from much larger players. As for Vaxart, I'm intrigued by its oral vaccine technology. But the company's pipeline candidates aren't far along enough in clinical testing yet to warrant investing in the stock, in my view.

That leaves Novavax. I've been a fan of the biotech stock for a while because of my optimism about the prospects for NanoFlu. Although FDA approval for the flu vaccine isn't a slam dunk, I think NanoFlu's chances of winning approval and becoming a commercial success are good. Novavax's COVID-19 vaccine is a longer shot (no pun intended). However, I think it potentially could prove to be safe and effective in clinical testing.

Novavax isn't an ideal stock for risk-averse investors. But my take is that aggressive investors should check out the high-flying biotech.