Please ensure Javascript is enabled for purposes of website accessibility
Log In Help Join The Motley Fool
Free Article Join Over 1 Million Premium Members And Get More In-Depth Stock Guidance and Research
By David Jagielski - Jul 26, 2020 at 7:32AM

Unless you love risk, you probably won't want to invest in these stocks that are hot among millennial investors.

Robinhood is a great place to see which stocks are in vogue. The trading platform is popular with millennials, and many of the best-performing stocks on the markets find themselves on the Robinhood 100 list. However, not all of these widest-held investments are necessarily good buys, particularly during the economic turmoil that has resulted from the coronavirus pandemic.

The three stocks listed below are among the hottest Robinhood stocks right now, but they're also investments that you should keep far away from your portfolio.

Cronos Group (CRON -3.45%) is a top stock on Robinhood, but the Ontario-based pot producer really shouldn't be a crowd favorite. Considering its lack of sales growth, recurring operating losses, and a high price-to-sales multiple of more than 80, it's obvious that there are better pot stocks than Cronos.

It's also generally not a great sign when a company restates multiple financial statements -- which Cronos did for three quarters in 2019 because its sales numbers were wrong. 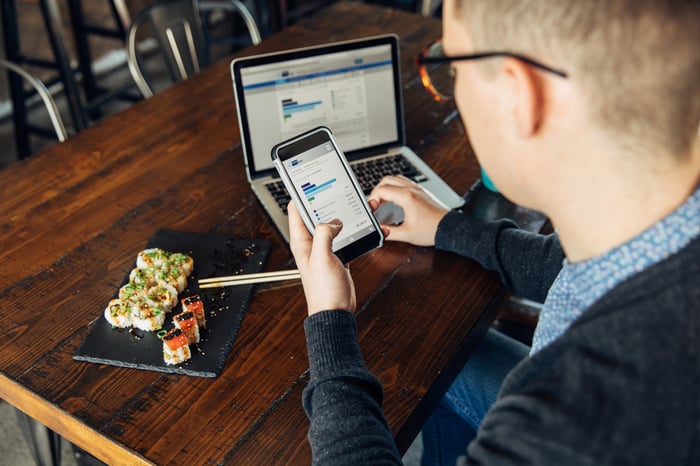 There is no shortage of red flags, including earlier this month when investors learned, through a Securities and Exchange Commission filing, that Robert Rosenheck, CEO and co-founder of Lord Jones, was leaving the company. Cronos acquired Lord Jones a year ago in a cash-and-stock deal worth $300 million to compete in what's already a competitive hemp-derived CBD (cannabidiol) market in the U.S.

High-ranking departures aren't rare, especially in the cannabis industry. However, it's not a great sign, especially when a company's co-founder leaves so quickly after their company is acquired. When taking into account all the other issues related to this stock, investors should think more than twice about investing your dollars here.

American Airlines (AAL -0.80%) is another popular Robinhood stock despite very little air travel going on in the past few months. The airline reported its second-quarter results on July 23 and it incurred a loss of $2.1 billion as operating revenue declined by a whopping 86% from the prior-year period. Although expenses were also slashed, they dropped by 62% and weren't deep enough to offset the steep fall in sales.

Over the past six months, American Airlines burned through $1.1 billion in cash from its day-to-day operating activities. It's bad news when two key areas on the Texas-based company's earnings release were "conserving cash" and "bolstering liquidity." Those are not concerns investors normally have about businesses that are in good shape. And it's a reminder of why American Airlines is anything but a safe investment right now, as people remain indoors during the pandemic and travel is limited. The good news is that the company says its liquidity as of the end of the second quarter was $10.2 billion.

While there was initially hope that cities reopening would give the economy a shot in the arm and get more planes in the skies, a nationwide resurgence of COVID-19 cases is calling that optimism into question. That's why investors ought to stay far away from American Airlines shares, as many questions remain ahead.

Carnival (CCL -1.04%) is another risky but favorite Robinhood stock that's dependent on travel. The spread of COVID-19 and resulting lockdowns dealt a blow to the company's financials when Carnival released its second-quarter results on July 10. In Q2, the Florida-based company reported a net loss of $4.4 billion. With just $740 million in revenue for the quarter, Carnival generated just 15% of the $4.8 billion in sales it recorded in the prior-year period. At $740 million, that was barely enough for the company to cover its payroll-related expenses of $705 million in Q2, let alone cover its other overhead and expenses.

Like American Airlines, cash is a big concern here for investors. Carnival spent $1.8 billion during the past six months just to cover its day-to-day operating activities. With $6.9 billion in cash and cash equivalents as of May 31, Carnival still looks to be safe -- for now. However, this cruise stock isn't one to be bullish on, certainly not with the spread of COVID-19 showing no sign of slowing down.

Are any of these stocks worth the risk?

Here's a quick overview of how these stocks have performed compared to the S&P 500 so far in 2020: 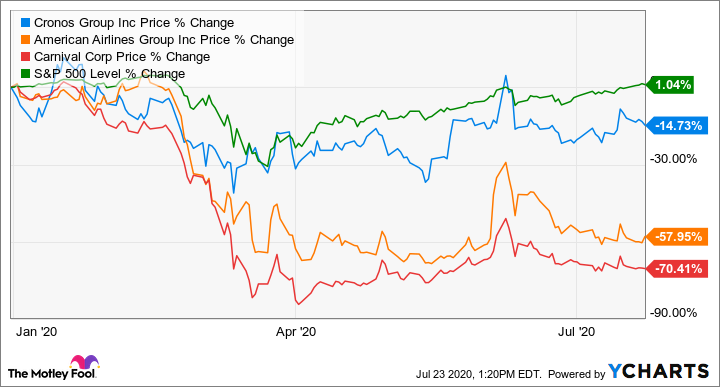 Cronos is the closest to matching the index, but even its share price is down nearly 15% year to date. As far as all three have tanked in 2020, there's still plenty of room for them to fall further.

While Cronos is safer compared to the other stocks from a cash flow perspective (as of March 31, its cash and cash equivalents were over $1.1 billion and quarterly operating cash burn was just $39 million), that's not enough to make it a buy. There are just too many concerns surrounding the company's financials to make the stock worth its hefty valuation.

These three stocks are high-risk investments that can destroy your portfolio, and despite the Robinhood hype, you should avoid them at all costs.

The 4 Robinhood Stocks Wall Street Hates the Most