Credit card lender Discover Financial Services (NYSE:DFS) reported its second-quarter results on Thursday, and they were ugly. Total revenue fell 7%, while net income swung from a $753 million profit a year ago to a $368 net loss. The company set aside a whopping $2 provision for loan loss, or a net $1.3 billion reserve build after accounting for $767 million in charge-offs last quarter.

Unfortunately, Discover increased its reserve even over the large build taken in the March quarter during the early days of the pandemic, admitting to a worsening outlook compared with three months ago. Management also forecast charge-offs increasing later this year and into 2021.

On the other hand, Discover's balance sheet and customer base also seem in much better shape compared with the last financial crisis in 2008. And if the government comes through with another round of stimulus, things may not be turn out quite as bad as they might seem. 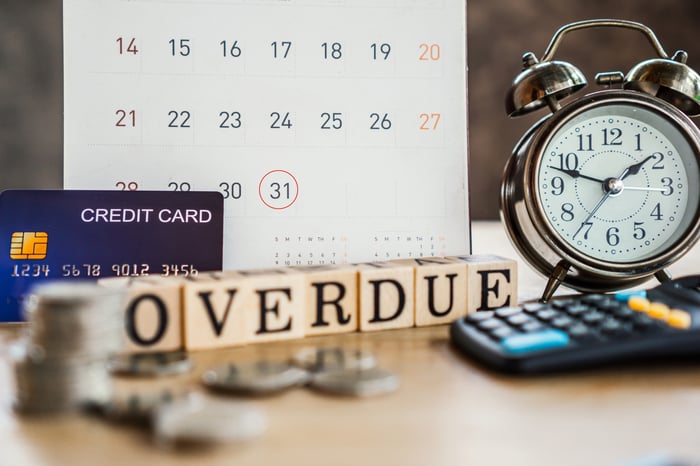 Charge-offs and delinquencies modest but projected to rise

The 30-day delinquency rate might make it seem like things are improving, not deteriorating, on the credit front; however, management believes the unprecedented stimulus efforts from the federal government helped out consumers make their payments last quarter.

Unfortunately, management doesn't expect that to last. CFO John Greene said on the conference call with analysts that the company expects charge-offs to rise in the fourth quarter and peak sometime late in 2021. That's based on a scenario in which unemployment peaks at 16% and then decreases to 11% by the end of the year.

Yet on the other hand, that could be overly conservative if the government extends its stimulus measures this year. Greene said that "in terms of the government programs, we did nothing in our modeling to reflect what's been kicked around right now in Washington in terms of the next round of stimulus. So, that -- I think that could certainly push out the curve a little bit in terms of both delinquency and charge-offs."

Why Discover could outperform this time versus 2008

While management is taking a conservative path on modeling and reserve builds, it also feels much better about its position relative to where it was before the Great Recession of 2008. Even though a majority of Discover's business comes from unsecured credit card loans, management pointed to several ways the company had improved its risk controls since 2008.

These include higher FICO scores across its entire lending portfolio, lower delinquency levels coming into the recession, a lower potential obligation from revolving credit capacity, and a lower-leveraged consumer overall than before the 2008 recession.

High uncertainty remains, but that could be a positive

While the reserve build and projections for charge-offs are notable for Discover, there's also a lot of uncertainty baked into management's forecast. Even Discover's seasoned management admitted that "consumer behavior is really difficult to predict here in a time such as this."

Yet in recent days, congressional Republicans, who had been reluctant to offer more stimulus earlier this summer, are now putting forward a plan that would provide for continued unemployment benefits -- though not as generous as the first stimulus bill -- along with another stimulus check to individuals similar to the $1,200 check from the first bill from March.

Given the conservatism in Discover's projections, its healthy capital ratios, and low valuation, any sort of government stimulus could lead to additional upside for shares. Like most financial stocks, Discover shares remain very cheap and are still well below where they were prior to the pandemic. And while a fairly downbeat scenario is priced into shares, upside surprises could come from new government stimulus measures, and/or progress on a COVID-19 treatment or vaccine, where there has also been some good news recently.

Discover Financial Services: The Worst Is Yet to Come @themotleyfool #stocks $DFS Next Article
Current