The bank has performed exceptionally well over the past decade, and the coronavirus pandemic does not seem to be slowing it down.

First Republic Bank (FRC 0.28%) is definitely a stock you want on your radar. The $128 billion asset bank focuses on serving high-net-worth individuals in wealthy markets such as Boston, New York City, Los Angeles, and San Francisco. Not only was it one of the top performing bank stocks over the last decade, but it is also one of the few banks still growing earnings during the coronavirus pandemic. It's trading just a few dollars lower than where it started the year. Here's why.

While most banks are reporting a significant decline in profits or losses, First Republic has actually managed to grow its earnings, despite the heavy economic downturn that has resulted from the pandemic. The bank reported net income in the second quarter of $256.8 million, up about $38 million from the second quarter of 2019. That's after increasing its dividend after the first quarter of the year. One main contributor to its second-quarter success was the ability to increase loan volume -- and net interest income -- by about $50 million year over year. 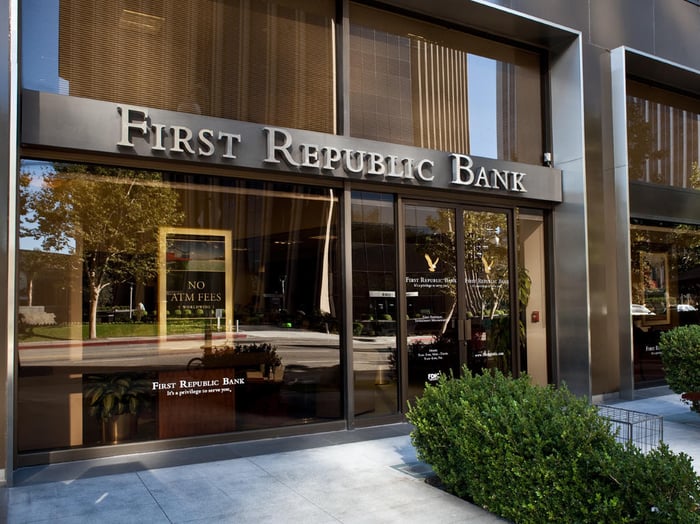 But another big reason behind the bank's success is its ability to maintain strong credit quality. Most banks have been setting aside large sums of cash to prepare for looming loan losses, which has directly cut into their profits. First Republic set aside a roughly $31.1 million provision in the second quarter of the year, which is up about $10 million from the second quarter of 2019. It also set aside more than $60 million in the first quarter of the year. But its total allowance for loan losses as a percentage of total loans is still fairly low compared to the industry right now, at 0.58%, and the bank has very few charge-offs (debt unlikely to be collected) through the first six months of the year. This almost seems too good to be true given the economy, but First Republic provides some good information about its loan book that supports these numbers.

The bank has modified about $4.3 billion of loans, meaning they've changed the terms of the loan -- likely due to financial stress. While management on the company's recent earnings call said it's hard to know the exact health of those loans at this point, they seemed to feel fairly confident. Here's what First Republic Bank CEO Jim Herbert had to say:

We have, as you might imagine, scrubbed them considerably and probably more importantly is we know our clients very well. We know the situation very well. Suffice it to say that the vast majority of those modifications have quite reasonable loan-to-value ratios into the 50s. And so we don't expect to be very much at risk ultimately on losses. We will have some anecdotal situations, but it's our opinion, we don't have a systemic issue at this point.

It's almost hard to see a bank continue to grow and perform well in this kind of environment and not be a little weary, but First Republic looks very solid. The share price is doing extremely well for a bank stock, the company has continued to boost earnings during the pandemic, and credit quality looks very strong. Obviously, investors should watch every bank during a time like this, but I have lots of confidence in this stock continuing to perform well.