This is proving a difficult year for dividend investors. As a host of large-cap companies have reduced or suspended their dividend payments due to the continuing economic malaise caused by the COVID-19 pandemic, income-oriented investors have sought fresh ideas that offered relative safety.

Community banks with manageable exposure to lending in this recession may provide risk-adjusted income-investing opportunities. One compelling example is Community Bank System (NYSE:CBU), which has branches in upstate New York, western Massachusetts, Vermont, and northeastern Pennsylvania. Its most recent earnings results, released Monday, illustrate its attractiveness as a dividend play now.

Community Bank System reported second-quarter net income of $35.2 million, down from $45 million in Q2 2019. Diluted earnings per share fell from $0.86 to $0.66. The decline in earnings was primarily driven by higher loan-loss provisioning, as well as expenses related to the company's recent purchase of New York-based community bank Steuben Trust.

In the context of the COVID-19 pandemic, it's important to scrutinize a bank's provision for credit losses. Community Bank System added $9.8 million to those reserves in the second quarter, against $1.4 million in the comparable prior-year quarter. Of that sum, $3.2 million was related to the Steuben acquisition, leaving $6.6 million which largely stemmed from defaults anticipated in its portfolio due to COVID-19. So far this year, the company has provisioned $12.2 million in expected pandemic-influenced losses.

And yet Community Bank System only reported $900,000 and $1.6 million in charge-offs in the second and first quarters of 2020, respectively. In other words, while the company has increased its allowance for loan losses on its balance sheet via $12.2 million in new loss provisions, it only recorded actual loan losses of $2.5 million through the first six months of the year.

The wide gulf so far between the company's expectation of losses and its recording of charge-offs is likely due in part to a conservative approach by management that seeks to prepare for the worst-case scenario. Additionally, some of its customers' impending defaults have been averted or delayed, as the bank has actively participated in the Treasury's CARES Act's Paycheck Protection Program. Through June 30, Community Bank System has supplied roughly 3,400 PPP loans to its business customers, totaling over $500 million. 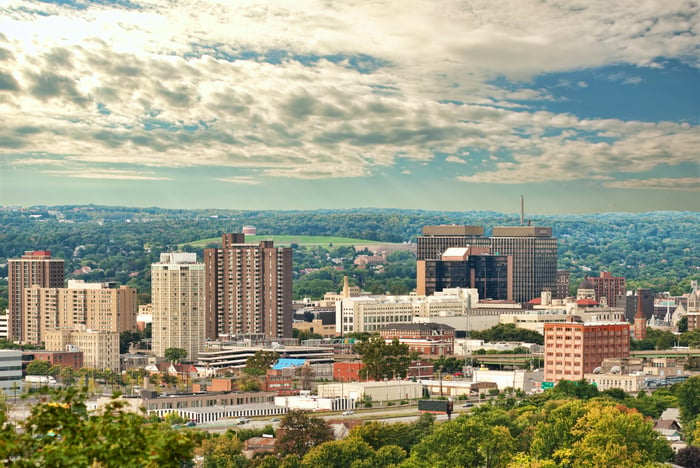 In recent years, the company has diversified its revenues beyond lending. This quarter, non-interest income, including deposit services, mortgage banking, employee benefits administration, and wealth management, added up to nearly $53 million, or 39% of overall revenue.

Management has exhibited an acquisitive streak lately, snapping up not only Steuben Trust, but also Kinderhook Bank, another New York-based competitor, in July 2019. As it expands its asset base and its geographical footprint, Community Bank System is opening up opportunities to cross-sell services and pitch its non-interest products to new customers. This should provide the company with more insulation against credit losses and the vagaries of concentrated lending versus some of its community banking peers.

In May, Community Bank System declared its second quarterly dividend of 2020, holding its payout steady at $0.41 per share. The company has increased its quarterly dividend by 37% cumulatively over the last five years, and its strong balance sheet, modest loan losses, and manageable payout ratio of 48% indicate that it's unlikely to cut or suspend it this year. Although its share price has declined by 17% year to date (falling largely in tandem with the banking sector), this descent has lifted the stock's yield to 2.9% -- a handsome payout for total return investors.

With a market capitalization of just $3 billion, Community Bank System isn't a headline-grabbing company. However, it boasts a long record of earnings growth, and management is keen to make opportunistic acquisitions that can boost revenue. Even factoring in its 2020 stock price dip, the bank has returned an average of 21% annually to investors over the last 10 years on a total-return basis. In a period of economic turmoil, Community Bank System is making a case that smaller can be safer for alert income investors.