The armored-car company's quarterly results looked tough on the surface, but they still pleased investors.

Shares of armored-car and cash management company Brink's Company (BCO 0.37%) rose by more than a third on July 29, hitting a gain of 36% at one point in early trading. Although the stock lost a material amount of that gain as the day progressed, it was still up by roughly 20% at 2:30 p.m. EDT.

The big story was the company's second-quarter earnings release, which was, taken in isolation, not particularly good reading. With the impact of COVID-19 creating material headwinds globally, Brink's saw revenue fall by 10% year over year in the quarter. Organic revenue, which removed one-time items like acquisitions and divestitures, dropped even more, off by 17%. Adjusted earnings were $0.67 per share in the quarter versus $0.86 in the same quarter of 2019. 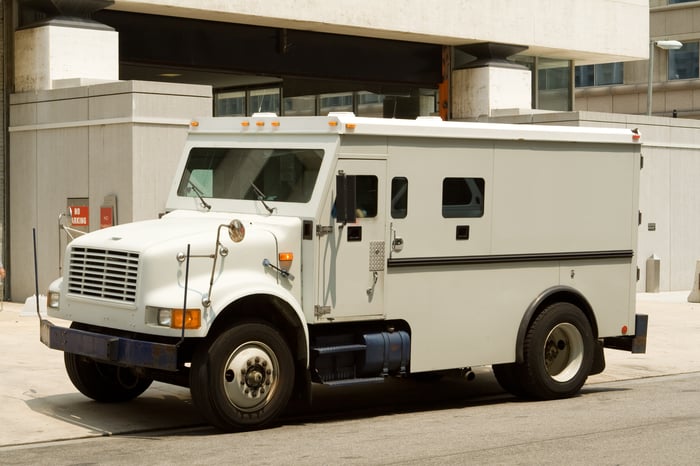 However, companies don't operate in a vacuum. The consensus estimate for quarterly earnings was a loss of $0.08, so Brink's handily beat Wall Street expectations. In addition, it noted material improvement on a monthly basis, with the company highlighting that its U.S. revenue was down 24% in April, but "only" off by 11% in June. While an 11% drop isn't exactly good news, it's pretty nice when you compare it to April's number and clearly suggests that business has been improving. Management also reported ongoing progress with a sizable acquisition. When you juxtapose the company's earnings against this information, you can understand why the stock rallied.

After such a big run in such a short period of time, investors have probably priced in much of the good news here. In fact, even Brink's admits that it's hard to predict what will happen from here with its business because of the uncertainty surrounding the path of COVID-19. That said, the one thing long-term investors can probably expect with some certainty is continued volatility.