Anheuser-Busch InBev (NYSE:BUD) announced its quarterly results today, saying that sales volumes grew sequentially for each month in its second quarter versus the year-ago period. From a decline of 32.4% in April, volumes were only down 21.4% in May, and grew by 0.7% in June.

Due to the coronavirus pandemic, the company said it performed an impairment review. It determined that a 30% probability of the worst-case scenario warranted taking a $2.5 billion noncash goodwill impairment charge. The risk it identified was for a recovery of sales in South Africa, as well as the rest of Africa. South Africa has recently banned the sale of alcohol for a second time in its attempt to slow the spread of the coronavirus. 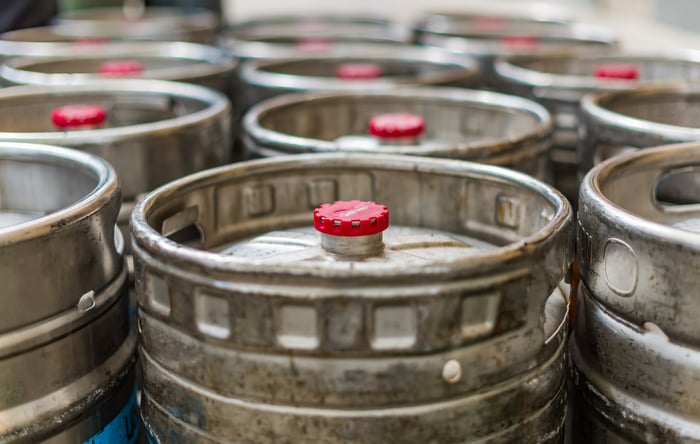 AB InBev said total revenue for the second quarter decreased by 17.7%. It said combined global revenue from three of its big global brands, Budweiser, Stella Artois, and Corona, declined by 16.6% for the quarter.

Performance for the quarter in the U.S. was driven by the success of its premium brands, the company said. Quarterly revenue dropped 5.9% in the U.S., which was a relatively strong result, due to the "off-premise" channel, with many bars and restaurants remaining closed and people drinking at home.