The ability of Hanesbrands (NYSE:HBI) to transform its underwear production lines to manufacture personal protective equipment meant that what would have been a devastating quarter instead generated $0.60 per share in adjusted profit, blowing away Wall Street's expectation of a $0.07 per share loss.

Even Hanesbrands' management was taken by surprise, with CEO Gerald Evans Jr. saying, "We performed significantly better than our base-case scenario in both our apparel business and our new protective garment business."

Just before the market opened this morning, Hanesbrands stock was running 8% higher and hitting levels not seen since Thanksgiving. 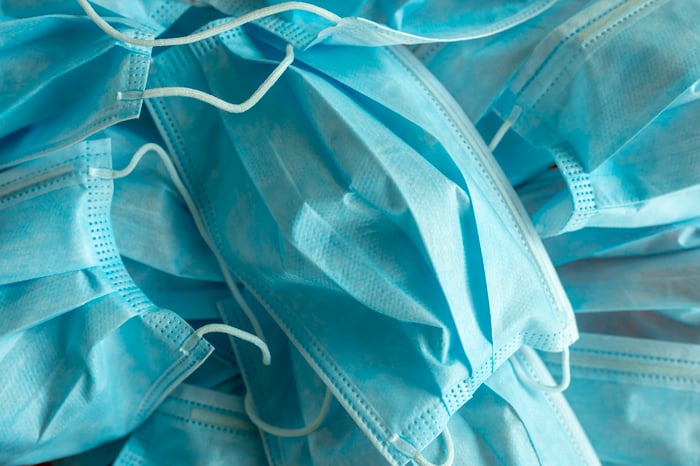 Hanesbrands was fortunate it was able to turn to PPE garments, as the $752 million in sales rescued its performance.

Total revenue came in at almost $1.74 billion, which was down 1.3% from last year's $1.76 billion in revenue, meaning sales of Hanes, Champion, Maidenform, Bali, Playtex, L'eggs, and Wonderbra garments were down 43% year over year if you subtract the PPE contribution.

While Hanesbrands' cost of sales inched higher during the quarter, causing gross margins to contract, it was able to cut operating costs significantly, helping to boost operating and net margins, and producing a net profit of $161 million, or $0.46 per share, some 8% higher than last year. Adjusted for nonrecurring items, earnings were $0.60 per share.

Hanesbrands had been struggling before the pandemic, and three-quarters of its sales came from third-party retailers, meaning the closure of nonessential businesses put it at risk, even though Walmart and Target account for a combined 25% of sales.

Being able to pivot to PPE meant it could help protect not only frontline workers, but also itself from the ravages of the pandemic.