The coronavirus pandemic understandably caught many people and companies off guard. Even consumer staple companies such as Clorox that saw an increased demand had trouble sufficiently boosting production to meet it. While some may view this as a nice problem to have, it could also result in lost sales as people turn to alternative products.

Fortunately, General Mills (NYSE:GIS) doesn't have this issue. With local governments restricting dining in at restaurants, more people are eating at home, helping the company's fiscal fourth 2020 results, which encompassed the period ended May 31. And this is not merely a one-quarter phenomenon, either. 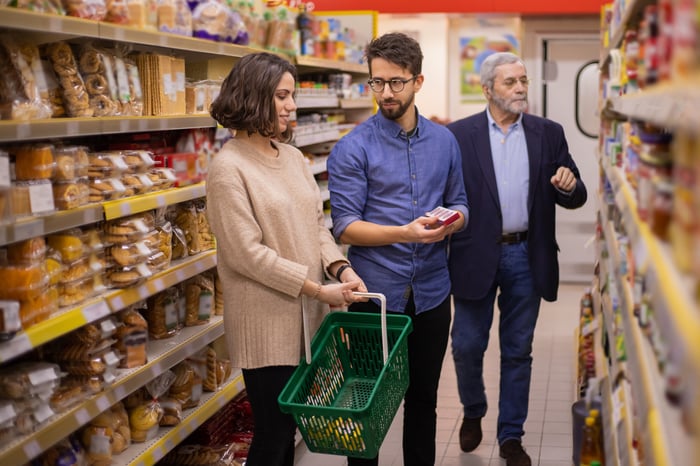 With more people eating at home, it's no surprise that they have turned to General Mills' products. The company sells cereals, snacks, and yogurts under well-known brands like Cheerios, Chex, Fiber One, and Nature Valley. In other words, popular, everyday products.

This is only part of the story, however. While the pandemic caused demand to surge, General Mills was able to meet it. Its fourth-quarter sales rose 16% versus a year ago, after removing the effects of the extra week in this year's period and foreign currency translations. Most of this increase, about three-fourths, was from higher volume.

I strongly believe the company's strong sales growth can continue.

With the U.S. and other countries in a recession, people are likely to dine out less and eat at home more. After all, cutting out discretionary spending is what people typically do after they lose their jobs and are in belt-tightening mode. On General Mills' fourth-quarter earnings call, CFO Kofi Bruce said, "We expect consumer concerns about COVID-19 virus transmission and the potential for a protracted recession will drive some level of elevated food demand at-home this year, relative to pre-pandemic levels."

It's been a long time since the last recession, but General Mills has done quite well. The company's sales increased from $12.4 billion in fiscal 2007 to $14.7 billion in fiscal 2009, about a 9% compounded growth rate. During that same period, its diluted earnings per share rose from $1.59 to $1.90.

I would expect General Mills to post strong sales and earnings results during this downturn, too.

Shareholders have also been rewarded with a steady dividend of $0.49 per quarter since 2017. However, with management continuing to focus on reducing debt, investors could see an increase soon.

General Mills ended the year with $13.5 billion of debt, down from the prior year's $14.5 billion. Its leverage, based on the ratio of debt-to-earnings before interest, taxes, depreciation, and amortization (EBITDA), stood at 3.2 times. Once this reaches 3 times, its long-term target, the company will look to raise its dividend. Bruce said that at that point, "...we will start to look at resuming our normal capital allocation policies with the first priority being focused on increasing the dividend rate."

It looks like the company can afford a higher payout, too. General Mills' operating cash flow was $3.7 billion last year. After $461 million of cash outlays for capital expenditures, there was plenty left over to pay the $1.2 billion of dividends.

General Mills is a rare company that does well during economic downturns. It seems likely that the company will reward investors with higher dividends at some point in the not-too-distant future. This is a delicious combination that is tough to pass up.