Please ensure Javascript is enabled for purposes of website accessibility
Log In Help Join The Motley Fool
Free Article Join Over 1 Million Premium Members And Get More In-Depth Stock Guidance and Research
By Keith Speights – Jul 31, 2020 at 5:47AM

Moderna had a head start in advancing its COVID-19 vaccine into clinical testing. But Pfizer is ahead in some important ways.

There's one U.S. company developing a novel-coronavirus vaccine candidate that's probably been in the headlines more than any other. Moderna (MRNA -0.55%) made waves earlier this year with its rapid development of a COVID-19 vaccine candidate that uses messenger RNA (mRNA). The mRNA spurs the ribosomes to generate antigens that are like the spike protein in SARS-CoV-2 (the novel coronavirus), then the body responds by producing antibodies against it.

Moderna quickly established itself as a leader in the race to develop a COVID-19 vaccine. Its stock has skyrocketed as a result, more than quadrupling so far this year.

But a much larger drugmaker also has a mRNA-based COVID-19 vaccine candidate. Pfizer (PFE -1.10%) teamed up with German biotech BioNTech (BNTX -1.27%) in March because of the promise of its BNT162 program. Don't be surprised if Pfizer actually becomes a bigger coronavirus winner than Moderna. 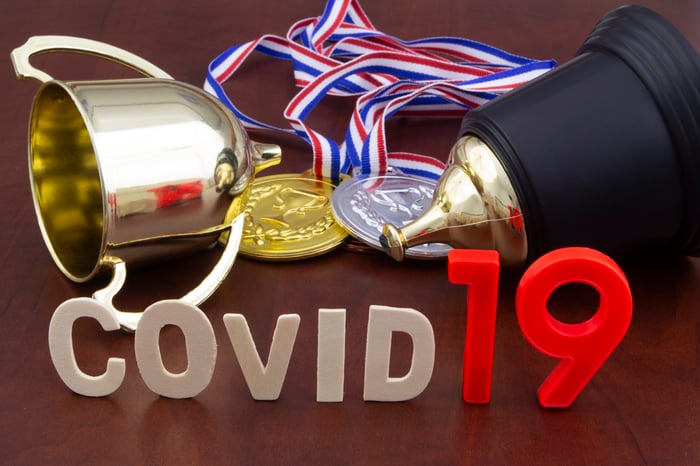 One reason why Moderna has received so much attention is that its COVID-19 vaccine candidate, mRNA-1273, advanced through clinical studies very quickly. A phase 1 study conducted by the National Institutes of Health dosed its first participant on March 16. Moderna's phase 2 study of mRNA-1273 began in late May. The biotech kicked off a phase 3 study earlier this week.

Pfizer and BioNTech were over a month behind Moderna in beginning clinical testing of four COVID-19 vaccine candidates, with the first participants in a phase 1/2 study conducted in Germany dosed on April 29. A phase 1/2 study in the U.S. began the following week.

But Pfizer has now nearly caught up with Moderna. The big drugmaker and its smaller German partner announced on Tuesday of this week that COVID-19 vaccine candidate BNT162b2 is being advanced into pivotal phase 2/3 clinical testing.

More importantly, Pfizer and BioNTech could have late-stage results roughly around the same time as Moderna. The two companies stated that they "expect to be ready to seek Emergency Use Authorization or some form of regulatory approval as early as October 2020." That's in line with public statements made by Moderna CEO Stephane Bancel, who recently said that late-stage results for mRNA-1273 could be released in October or November.

Pfizer is way ahead of Moderna in other ways.

Moderna is on track to be able to make around 500 million doses of its COVID-19 vaccine annually beginning in 2021. It thinks that this level could be increased to 1 billion doses per year, but Moderna is relying on third parties to help boost its production capacity.

So far, Moderna has received substantial funding from the U.S. government. However, the biotech has not yet lined up any supply deals in the U.S., or with any other country.

What about Pfizer? It recently landed a massive deal with the U.S. government to supply an initial order of 100 million doses of its COVID-19 vaccine for $1.95 billion. There's also an option in the agreement for the U.S. to purchase another 500 million doses.

In addition, Pfizer signed a deal with the United Kingdom to supply 30 million doses of its COVID-19 vaccine for an undisclosed amount. Both the U.S. and U.K. agreements are contingent upon approval or authorization of the coronavirus vaccine developed by Pfizer and BioNTech.

It's not hard to imagine Pfizer becoming a bigger winner with BNT162b2 than Moderna will be with mRNA-1273. Pfizer's greater production capacity and big supply agreements already in place give it distinct advantages. There's also a possibility that BNT162b2 could have a better safety profile than mRNA-1273, although we won't know for sure until late-stage results are available for both vaccine candidates.

However, there are different kinds of winning. Even if BNT162b2 is more successful commercially than mRNA-1273 (again, assuming both vaccine candidates win approval), Moderna could still beat Pfizer in terms of stock performance. A biotech stock like Moderna, with a market cap of around $32 billion, would have much more room to run than a big pharma stock like Pfizer, with a market cap of close to $220 billion.

Also keep in mind that Moderna owns all the rights to mRNA-1273. Pfizer gave BioNTech an upfront payment of $185 million and made an equity investment of around $113 million in the German biotech. It might have to pay BioNTech up to $563 million in milestone payments. Details of how any sales and profits of BNT162b2 would be split between the two partners weren't announced. The bottom line is that Pfizer won't pocket all of the money that BNT162b2 might make if it's approved.

Even with these caveats, though, Pfizer should stand to make a lot of money if BNT162b2 is successful in late-stage testing. And with a merger of its growth-challenged Upjohn unit with Mylan likely to wrap up in the fourth quarter of 2020, the big drugmaker could soon become a bigger winner than it's been in a long time.