Climbing about 11% since the start of June, the price of gold has soared higher this summer than ever before. Currently, the yellow metal is trading at about $1,970 per ounce, but there are some on Wall Street who believe that it's bound to continue trading higher -- even reaching as high as $2,300 per ounce by this next time next year.

While you may have decided to sell some of your unwanted gold jewelry as one way of benefiting from the historically high price, there's a better way: Yamana Gold (NYSE:AUY). Based in Canada, Yamana Gold is a mining company that operates a portfolio of five producing assets located throughout the Americas. Demonstrating a concerted effort to maintain financial health, Yamana Gold has also shown a commitment to planning for future growth and rewarding its shareholders, making it an ideal choice for gold-hungry investors. 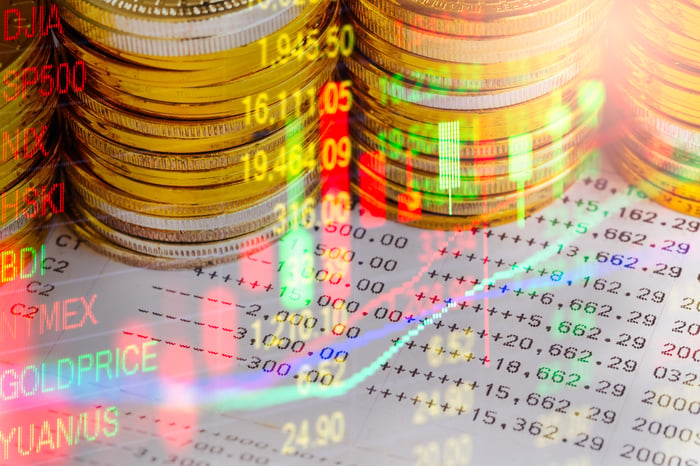 A glittering second quarter -- and beyond?

Despite the company having to ramp down operations at Cerro Moro and Canadian Malartic in late March due to the coronavirus, Yamana succeeded in smoothly resuming operations at two of the company's cornerstone assets. Yamana exceeded its expectations at Canadian Malartic, as average daily mill throughput in May and June surpassed 60,000 metric tons. In fact, the company reported a record for average daily mill throughput in May: 63,991 metric tons. The strong performance of the two assets contributed to the company achieving second-quarter gold production of 164,141 ounces, and led management to reaffirm the 2020 forecast of 786,000 ounces -- though it also said that gold production is so strong that it may upwardly revise its 2020 forecast.

In terms of its financials, Yamana reported operational cash flow of $92 million in the second quarter, and reported its fifth-consecutive quarter of free cash flow generation: $60.3 million (adjusted for costs related to COVID-19). With gold prices expected to remain high, Yamana seems poised to continue reporting strong cash flow in the remainder of the year. According to the company, for every $100 per ounce increase over $1,750 that the company averages in its gold price, management foresees a comparable $70 million increase in net free cash flow.

In addition to celebrating the company's strong financial performance in light of the coronavirus pandemic, investors will appreciate management's decision to raise the annual dividend 12% to $0.07 per share. While there's no guarantee of future increases, the fact that management has raised the dividend four times over the last year and the price of gold remains high suggests that management may be motivated to raise it further in the future.

One of the insights that investors are taking away from the global pandemic is that you shouldn't underestimate the value of a strong balance sheet. And in the case of Yamana, investors will find that management is committed to maintaining the company's financial health by way of managing its debt. Since 2017, in fact, management has identified a net debt-to-EBITDA ratio of 1.5 or lower. And during a recent investor presentation, management set an even more conservative target ratio of 1 or lower.

In the second quarter, Yamana shored up its balance sheet and reduced its net debt by $101 million. As a result, the company's net debt now stands at $768 million -- nearly 16% lower than the $889 million it had on its balance sheet at the end of 2019. Moreover, the company ended the quarter with a net debt-to-EBITDA ratio of about 1.9. Though this is higher than its target, the company stated in its earnings report that net debt would've been "further reduced if certain costs associated with COVID-19 had not been incurred." Furthermore, the company forecasts net debt to decline further in the second half of the year in line with stronger gold production and free cash flow.

While plenty can change over the next year and a half, management estimates that after the company repays the debt it has due in 2022, its leverage ratio, on a pro forma basis, will be close to zero.

An eye on the yellow brick road to the future

The company's organic growth prospects are another reason potential shareholders may enjoy golden slumbers with Yamana. Jacobina, an asset located in Brazil, is the source of several growth initiatives. For example, Yamana reported positive findings from the Phase 2 optimization project at Jacobina in April -- a project that could increase annual gold production from 175,000 ounces to 230,000 ounces, and there's potential to extend the life of the mine even further beyond the Phase 2 project.

Agua Rica represents another auspicious opportunity for the company. Located in Argentina, Agua Rica has proven and probable gold and copper reserves of 7.4 million ounces and 11.8 billion pounds, respectively. Yamana is conducting a feasibility study to be completed in 2021, though it articulated in its Q2 earnings report that it "has concluded that Agua Rica represents an excellent development and growth project which the Company intends to continue to advance through the development process through the Company's controlling interest [56.25%] in the project."

Investors mining the market for interesting gold opportunities should pay particular attention to Yamana Gold. The company's commitment to its financial well-being and its enthusiasm for rewarding shareholders are just some of the reasons why it's a compelling choice. If you decide to pick up shares -- or prefer to keep the stock on a watch list for the time being -- monitoring the company's ongoing commitment to reducing its leverage is critical, as this will fortify the company's financial position in the case of a steep downturn in the price of the yellow stuff.