Please ensure Javascript is enabled for purposes of website accessibility
Log In Help Join The Motley Fool
Free Article Join Over 1 Million Premium Members And Get More In-Depth Stock Guidance and Research
By Matthew DiLallo – Updated Aug 2, 2020 at 9:33AM

ONEOK believes it has taken enough steps to maintain its big-time payout during the current oil market downturn.

Shares of pipeline giant ONEOK (OKE -8.44%) have cratered more than 60% this year. That sell-off has pushed the company's dividend yield up to an eye-popping 13.7%. One of the main factors weighing on its valuation is the impact of this year's oil market downturn on ONEOK's volumes and cash flow. These headwinds have put some pressure on its balance sheet, causing concerns about the dividend's sustainability.

However, ONEOK has made several moves over the past few months to shore up its financial position, and the management team reaffirmed its belief in the current dividend on the second-quarter conference call. Here's why the company's managers don't currently see a need to cut the payout as well as what could change their mind. 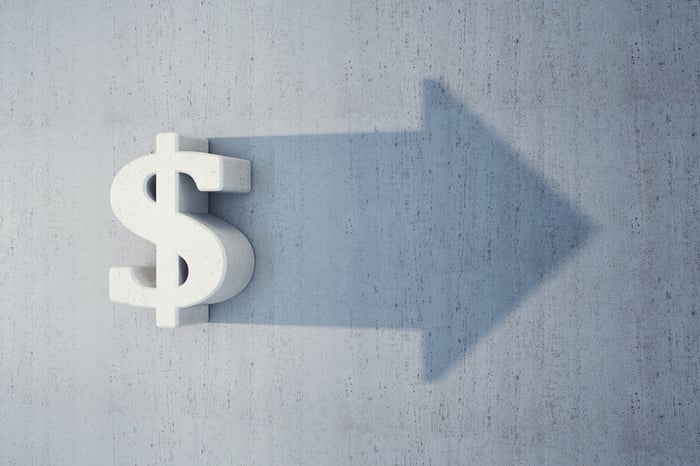 No pressing need for a reduction at the moment

On the call, ONEOK's CEO, Terry Spencer, discussed the current headwinds facing his company. However, despite several issues, and another potential problem looming just over the horizon, the company believes it can navigate through this challenging period without making any drastic changes. He stated that "as it relates to our dividends, with our business improving and volume strengthening, we don't see the need to take action on the dividends."

Crashing crude oil prices during the second quarter took volumes with them as many of its producing customers shut in wells to preserve value. That had a significant impact on ONEOK's cash flow during the period, plunging 44% year over year. As a result, ONEOK paid out more cash by way of dividends than it generated.

However, with oil prices improving in recent months, producers have started bringing their wells back online. ONEOK sees that trend continuing through the balance of the year, which should enable it to achieve the low-end of its revised guidance range. That has it on track to generate more cash than it pays out via the dividend this year.

What could cause ONEOK to change its mind

While the dividend is safe for now, Spencer cautioned investors that the company might reverse course in the future. He stated: "We do recognize that it (a dividend reduction) is a lever we could pull if our deleveraging expectations are not being met. Financially, we've taken the proactive steps to provide ample liquidity and protect our investment-grade credit ratings during the pandemic while continuing to return long-term value to our shareholders."

As the CEO points out, maintaining a strong balance sheet by reaching its leverage target will be a critical determining factor in maintaining the dividend. On a positive note, leverage started heading in the right direction during the second quarter as its debt-to-EBITDA ratio improved from 4.86 at the end of the first quarter to 4.5 at the end of June. However, that's above its sub-4.0 target level. Thus, if the company struggles to achieve that goal because market conditions don't continue improving, it might need to reduce its dividend and use that cash to accelerate its deleveraging.

Diving the recent leverage improvement was a $937 million stock sale ONEOK completed in June. The company also completed two bond offerings, $1.75 billion in March and $1.5 billion in May. These transactions enabled it to pay off the remaining $1.25 billion on its $1.5 billion term loan and the balance on its credit facility. Even with those repayments, ONEOK ended the quarter with $945.7 million in cash. It also now has an undrawn $2.5 billion credit facility. That gives it lots of liquidity to maintain its dividend during these turbulent times, even as it continues financing capital projects, which should be between $300 million and $400 million in the second half.

ONEOK believes it has done enough to shore up its financial profile in recent months to maintain its high-yielding dividend during the current downturn. However, it's not yet on solid ground because ONEOK needs oil market conditions to keep improving so that it can achieve its leverage target. If that doesn't happen, it might still ax the payout and use those funds to bolster its balance sheet. That makes it too risky for dividend investors these days.