Sector ETFs might be just what you need to sleep better at night.

The stock market may be in an optimistic frame of mind, but the U.S. economy is not in a good place right now. The latest report from the U.S. Bureau of Economic Analysis (BEA) estimates that the U.S. real gross domestic product (GDP) decreased at an annual rate of 32.9% in the second quarter of 2020. That's the fastest, steepest economic contraction in modern history.

Optimists will argue that the cause of the second-quarter drop-off, shelter-in-place orders, is now a thing of the past. But there's another economic datapoint that implies we're not out of the recession woods just yet. In the last two weeks of July, unemployment claims started rising again, after declining for nearly four months. 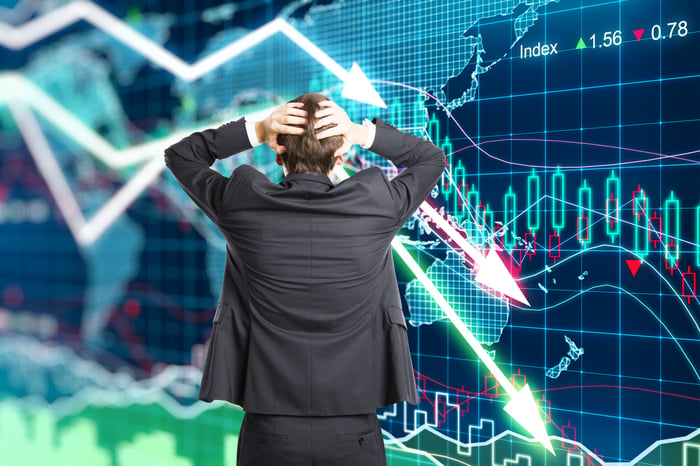 You can interpret that news as a signal to recession-proof your portfolio, and exchange-traded funds (ETFs) can help you do it.

ETFs are generally appealing for a few reasons. Like all mutual funds, they're diversified. But they often have lower fees and are more tax-efficient than mutual funds. Mutual funds that do a lot of trading will generate capital gains and push those to shareholders as taxable distributions. ETFs tend to have lower turnover and lesser capital gains as a result.

To find recession-proof ETFs that'll add some stability to your holdings, look to products and services that consumers will still buy even after a loss of income -- such as consumer staples, utilities, and telecommunications.

Over the last 10 years, the S&P Consumer Staples Sector Index has returned annualized growth of 12%. That's a notch below the S&P 500 index's 10-year annualized return of 13.75%, but it's been a smoother ride for the staples sector. When the S&P 500 index fell 34% from its February highs in March, for example, the consumer staples index only dropped 24%.

Another low-cost option is the Vanguard Consumer Staples ETF (VDC 0.13%). This ETF is more diversified than the SPDR version, with 94 positions versus XLP's 33. The Vanguard ETF tracks the performance of the MSCI US IMI Consumer Staples 25/50 Index and has an expense ratio of 0.10%.

Utilities, like consumer staples, aren't going to outperform in bull markets, but they offer some nice downside protection during recessions. Note that general utilities ETFs will have exposure to nonrenewable energy sources, which might not be where you want to invest your cash.

For utilities ETFs, look to low-cost fund powerhouses Vanguard and Fidelity -- each has an ETF that tracks the MSCI US IMI Utilities 25/50 index. Vanguard Utilities ETF (VPU 0.12%) has an expense ratio of 0.10% and $5.06 billion in net assets. Fidelity  MSCI Utilities Index ETF (FUTY 0.80%) has an expense ratio of 0.08% and $821 million in net assets. Both funds are most heavily weighted in electrical utilities and have less than 3% of their holdings in renewable energy sources.

iShares U.S. Telecommunications ETF (IYZ 1.19%) gives you exposure to U.S. companies providing telephone and internet services and related technologies, including Verizon, AT&T, T-Mobile (TMUS -0.17%), and Garmin (GRMN 1.19%). The fund has an expense ratio of 0.42% and $355 million in assets under management.

Communications services funds are a slightly different animal, but also appealing. These hold the old-school telecom providers like AT&T, along with technology players like Alphabet (GOOGL 0.06%) and Facebook (META 2.90%). This could be a riskier approach since these younger tech companies don't have the history of recession resilience that pure telecom does.

Sector ETFs in consumer staples, utilities, and telecommunications may be the least interesting positions in your portfolio. But if the U.S. economy falls deeper into recession and the stock market responds badly, your dullest holdings may be the ones you appreciate most.

Fine-Tune a Defensive Strategy With This ETF

3 Sector ETFs That Survived the Summer