Please ensure Javascript is enabled for purposes of website accessibility
Log In Help Join The Motley Fool
Free Article Join Over 1 Million Premium Members And Get More In-Depth Stock Guidance and Research
By Billy Duberstein – Aug 5, 2020 at 8:20AM

Shares of Carvana (CVNA -21.51%) rose 28.9% during the month of July, according to data from S&P Global Market Intelligence. Though there wasn't much company-specific news, the online used car marketplace continued its torrid run on the back of continued analyst upgrades. Additionally, a new wave of coronavirus outbreaks across the U.S. turned investor attention back to e-commerce and online marketplaces in general, such as Carvana. 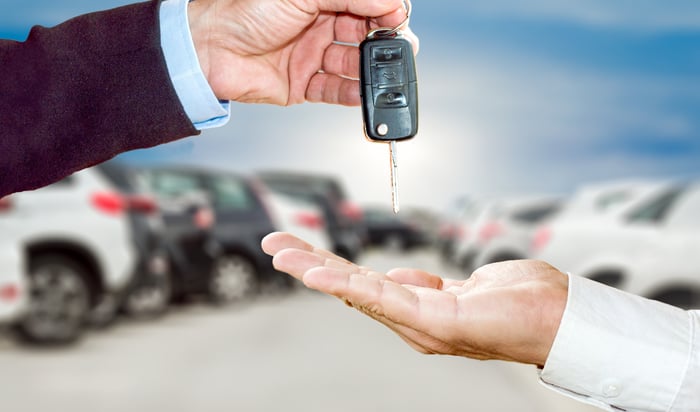 The month started off positively when Piper Sandler analyst Alexander Potter initiated coverage on Carvana with an overweight rating and a price target of $211, the highest on Wall Street.

Then, to close out the month, Carvana received another two price-target boosts, one from Bank of America (NYSE: BAC) analyst Nat Schindler, who hiked his price target from $100 to $155, and another from JMP Securities analysts, who raised their price target from $105 to $115. Schindler pointed out that June was a record-high month for Carvana app downloads, and that used car demand had pushed up pricing generally.

This isn't surprising; as COVID-19 cases surged across the South and West during the month, investors are likely anticipating even more interest in car ownership versus public transportation or ride-hailing, as well as more online car sales versus traditional in-person buys.

Carvana is still producing heavy losses as it takes up the monumental task of building out a capital-intensive used car e-commerce platform across the U.S. Yet with online sales only amounting to 1% of an $840 billion U.S. used car market, the opportunity is certainly there.

Carvana reports earnings today, Aug. 5. Analysts are expecting $1.15 billion in sales and a $0.77 net loss per share for the quarter. But it's really the commentary around the long-term growth opportunity and potential change in buying habits that will be most important in the earnings release and subsequent conference call. Interested investors should be paying attention.