Please ensure Javascript is enabled for purposes of website accessibility
Log In Help Join The Motley Fool
Free Article Join Over 1 Million Premium Members And Get More In-Depth Stock Guidance and Research
By Keith Speights - Aug 6, 2020 at 6:43AM

There are several reasons why the U.S. government might be choosing not to back the development of INO-4800 with big money, but two stand out.

So far, the U.S. government has awarded more than $6 billion to companies developing potential COVID-19 vaccines -- and not all of these funds have gone to American companies. U.K.-based drugmaker AstraZeneca (AZN -1.80%), for example, received up to $1.2 billion in funding from the Biomedical Advanced Research and Development Authority (BARDA) in May.

U.S.-based biotech Inovio Pharmaceuticals (INO -5.38%), though, has gotten the short end of the stick when it comes to federal financial support for its COVID-19 vaccine candidate, INO-4800. Sure, the Defense Department awarded it a $71 million contract to manufacture its Cellectra smart devices, which would be used to administer INO-4800. But that's chump change compared to the agreements worth close to $1 billion and a lot more that other drugmakers have secured.

Why hasn't Inovio won a huge coronavirus vaccine deal from Washington, D.C., yet? 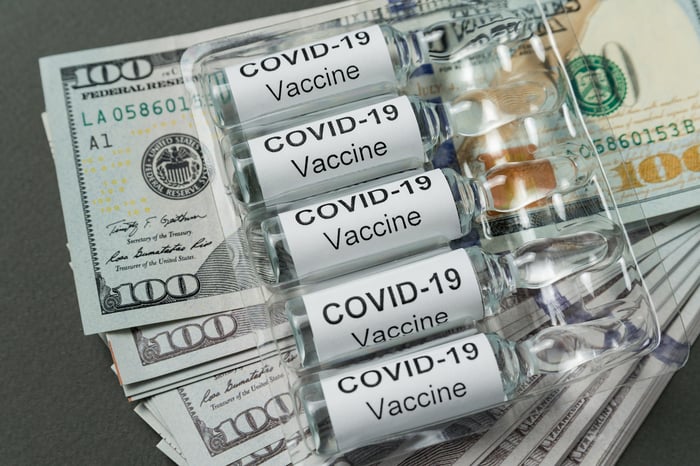 There are several potential reasons behind Inovio's lack of a high-dollar agreement with the U.S. government. One that comes to mind is that INO-4800 isn't as far along in the clinical testing process as the COVID-19 vaccine candidates of rivals such as AstraZeneca and Moderna.

Both of those companies have already advanced their candidates into late-stage testing. INO-4800 is still in phase 1/2. Inovio hopes to kick off phase 2/3 clinical trials this summer. At this point, though, it remains uncertain when those studies will begin.

It could also be that U.S. decision-makers simply don't have a good feeling about INO-4800's prospects. While Inovio reported positive interim results from its phase 1 study, it didn't provide details about the production of neutralizing antibodies -- something that scientists highly prioritize in vaccines since those antibodies are what give them the potential to prevent viral infections.

Then too, Inovio is smaller than many of the drugmakers that have landed contracts. The U.S. government could be more comfortable dealing with established industry majors like AstraZeneca and Pfizer.

Holes in the arguments

All of the above theories about why Inovio hasn't received hefty financial support from the U.S. government seem plausible. However, there are holes in each one.

Inovio's INO-4800 is certainly behind the candidates of AstraZeneca, Moderna, and a few others in terms of clinical progress. However, Sanofi (SNY -3.94%) and GlaxoSmithKline (GSK -6.71%) recently won a $2.1 billion deal with the U.S. -- and their experimental COVID-19 vaccine hasn't even started clinical testing yet.

That huge Sanofi-GSK agreement also seems to undercut the idea that U.S. officials aren't optimistic about the prospects for INO-4800. After all, it's hard to make the case that a vaccine candidate that hasn't been tested in people at all is more promising than one that has demonstrated overall immune responses in human trial subjects.

As for Inovio's relatively small size, that doesn't hold water either. Novavax (NVAX -2.47%) and Inovio have had similar market caps throughout most of 2020. But Novavax won a $1.6 billion deal with the U.S. government in early July.

There are two other possibilities that I suspect do directly relate to Inovio's lack of a major agreement with the U.S. government thus far. First, the problem could be that Inovio simply doesn't have the level of political connections that its rivals have. Second, its manufacturing capacity isn't as great as that of other drugmakers.

Don't discount the impact that the right political connections can have when it comes to landing government deals. Big pharma companies lobby actively in Washington, D.C., and contribute to political campaigns. Novavax isn't a large drugmaker, but a New York Times article last month highlighted the biotech's influential connections within the federal government.

My hunch, though, is that the more critical issue hurting Inovio is its manufacturing capacity. Inovio stated in April that it plans to produce 1 million doses of INO-4800 by the end of 2020. That's a drop in the bucket compared to what other companies can produce, including Novavax.

How concerning should this be to investors? Inovio still has a shot at securing a major supply agreement. But to do so, INO-4800 will probably have to demonstrate overwhelmingly positive efficacy and safety in late-stage studies. If that happens, this biotech stock will skyrocket. And it's likely that the company's relative lack of political influence and its currently low manufacturing capacity will be quickly forgotten as federal money flows into its coffers.