Please ensure Javascript is enabled for purposes of website accessibility
Log In Help Join The Motley Fool
Free Article Join Over 1 Million Premium Members And Get More In-Depth Stock Guidance and Research
By Jeremy Bowman – Aug 7, 2020 at 8:37AM

Even during a pandemic, Uber Eats is still a terrible business.

Uber (UBER -1.01%) Eats was supposed to be Uber's saving grace during the pandemic.

Demand for its ridesharing services has plunged as people around the world work from home and traditional entertainment and socializing options remain mostly unavailable -- however, demand for food delivery has skyrocketed for the same reasons.

Those trends played out as expected during the second quarter. Overall revenue declined 29% to $2.24 billion, but revenue in its mobility business, which was formerly called rides, tumbled 67% to just $790 million. Meanwhile, revenue from delivery, which was previously called eats, surged 103% to $1.21 billion as demand for restaurant delivery increased.

Uber reported an adjusted EBITDA (earnings before interest, taxes, depreciation, and amortization) loss of $837 million for the quarter, which excludes special costs related to COVID-19. Based on the numbers above, you would think the mobility business would be the primary culprit for the steep loss. But you'd be incorrect. 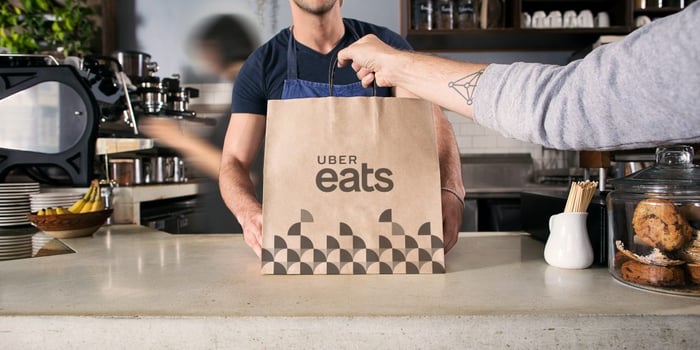 Delivery is a problematic business

Despite the headwinds from the pandemic, the mobility business still generated an adjusted EBITDA profit of $50 million, while delivery lost $232 million on an adjusted EBITDA basis. Even with revenue doubling from a year ago, that was only a modest improvement from the $286 million loss in the segment in the quarter a year ago -- and that includes Uber's decision to exit several underperforming Uber Eats markets in the past year, including India and South Korea, as management said it will only compete in countries where it can be No. 1 or No. 2 in market share.

For a while now, it's been evident that third-party restaurant delivery is a problematic business. Competitors like Uber and DoorDash have lost billions battling for market share gains. Grubhub, the former leader, has seen its profits disappear. Increasing competition has led to heavy spending on discounts and marketing, and restaurants often resent third-party delivery companies that charge steep fees that often make delivery orders unprofitable. During the pandemic, restaurants and cities have pushed back on the model, limiting the fees that third-party delivery providers can collect.

The coronavirus pandemic has been a gift to e-commerce and delivery businesses. Companies like Amazon, Shopify, Wayfair, and Etsy saw sales skyrocket during the second quarter, and profitability also surged along with it as these companies leveraged the windfall sales from pandemic-related demand onto the bottom line. Wayfair, for example, posted its first profitable quarter in its history as a public company, as revenue jumped 84% to $4.3 billion and it reported a generally accepted accounting principles (GAAP) net profit of $273.9 million. In the quarter a year ago, Wayfair lost $181.1 million on a GAAP basis, meaning it experienced a turnaround of nearly $500 million.

Uber, on the other hand, could not deliver a profit in its delivery business, despite the surge in sales. Since Uber doesn't break out costs by business segment, it's unclear exactly why the delivery business lost so much money. But Uber did drop one clue in the earnings release.

Uber often pays excess driver incentives for its deliveries, and acknowledges that "cumulative payments to Drivers for Delivery deliveries historically have exceeded the cumulative delivery fees paid by consumers." Unlike in mobility, which is a higher-margin business because Uber directly provides the service that it's charging customers for, with delivery most of the payment goes to the restaurant, so Uber must pay its drivers out of restaurant and customer fees. There's simply less money to distribute and cover overhead costs. As the statement above shows, customer fees alone aren't enough to pay the driver, let alone overhead costs, so Uber must tap the restaurant for the remainder or lose money on the sale. That is one of the reasons that tensions have increased with restaurants, as many of them believe they are being charged exorbitant fees by Uber and its peers.

Uber's adjusted EBITDA margin improved by 33 percentage points in the quarter, but that came while it pulled out of several weak markets, got a significant demand tailwind from the pandemic, and slashed $1 billion in annual expenses in areas like its corporate offices and research and development.

After losing out in its bid to buy Grubhub, Uber made a deal to take over Postmates for $2.6 billion, and it is expanding into areas like grocery as it seeks to further build out its delivery network. The Postmates deal could help Uber gain much-needed leverage in food delivery, but for now, the economics of the delivery business look fundamentally broken, and expanding into new verticals is only going to weigh further on the bottom line.

While the mobility business should return to health once the pandemic ends, delivery will be a drag on the business for the foreseeable future. That's one reason, among many, to tread cautiously with the stock.