The drugmaker hopes its experimental new therapy could change the lives of people who struggle with Alzheimer’s disease.

Shares of Biogen (BIIB 1.27%) rose sharply on Friday after the biotech company said its experimental Alzheimer's disease drug had been granted priority review status by the U.S. Food and Drug Administration (FDA). As of 3:25 p.m. EDT, Biogen's stock was up more than 10%.

The priority review designation will accelerate the FDA's timeline. The regulatory agency is now expected to make its approval decision by March 7, 2021. If approved, aducanumab, as the drug is called, would be the first therapy to meaningfully alter the course of Alzheimer's disease.

"If aducanumab is determined to be effective in reducing the decline in cognition and activities of daily living resulting from progression of this disease by addressing the underlying disease pathology, it will deliver meaningful benefits to those who most need them," said Dr. Christopher van Dyck, director of the Yale Alzheimer's Disease Research Center, in a press release. 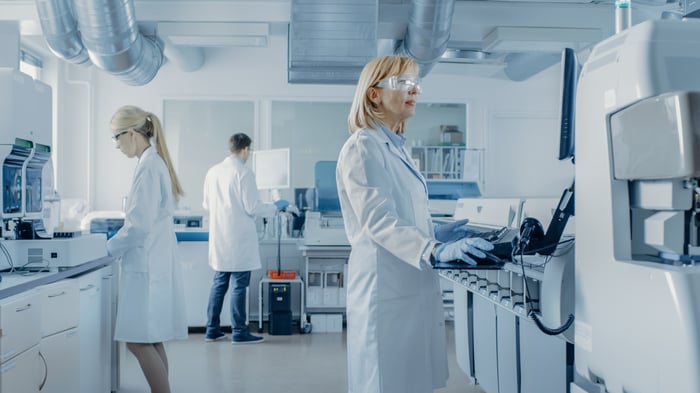 Biogen licensed aducanumab from Switzerland-based biotech company Neurimmune back in 2007. In October 2017, Biogen partnered with Japanese pharmaceutical company Eisai to develop and commercialize the drug.

Biogen's decision to move forward with aducanumab at this time is somewhat surprising. In March 2019, the biotech giant halted studies of the drug after an analysis showed it was unlikely to meet the primary endpoints of clinical trials.

However, Biogen CEO Michel Vounatsos seems undeterred. "We believe that aducanumab marks the beginning of a new era of potential treatments for Alzheimer's disease that will inspire even more discovery and innovation to bring hope to those affected by this devastating disease," he said.