Second-quarter earnings haven't been easy on the industrial sector, but two companies just proved that they have what it takes to get through the pandemic.

Although they aren't glamorous, there are many reasons why this transportation giant and trash titan offer two of the safest dividends right now. 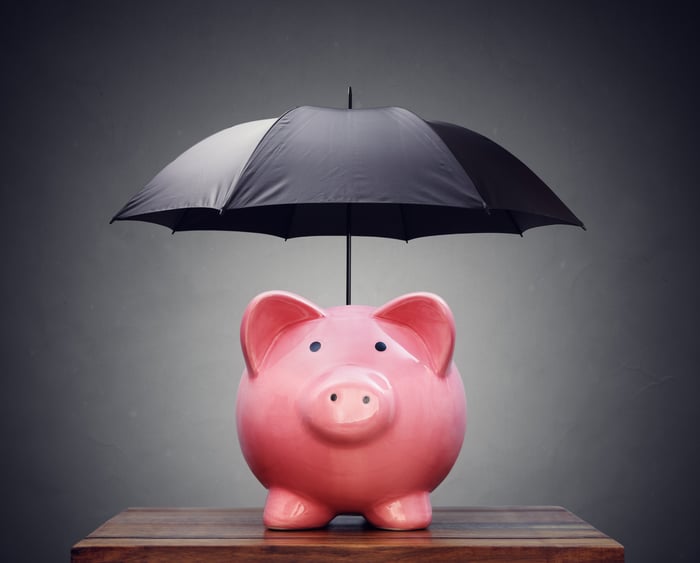 United Parcel Service (NYSE:UPS) just reported a monster quarter that sent its shares soaring to a new all-time high -- up 21% year to date.

The big takeaway from its second-quarter report was the rise in business to consumer (B2C) sales, which grew 65.2% year over year (YoY) in the U.S. to boost average daily volume by 22.8% -- a record rise. Some sort of increase in B2C sales was expected, since e-commerce has been booming as a result of the pandemic. The real concern going into the quarter was whether or not a rise in lower-margin B2C sales could offset the slump in higher-margin business-to-business (B2B) sales, which ended up falling by 21.9% year over year in the US. Just last quarter, UPS was so concerned with its B2B slump that it took back its full-year guidance, halted share buybacks, and even cut $1 billion from its planned capital expenditures.

The good news for UPS was that those high-margin B2B sales began improving in May and June, which contributed to U.S. operating margins falling from 11% to just 9.3% year over year. International margins actually improved from 19% to 22.7%, and supply chain and freight margins barely fell from 8% to 7.3%.

Overall, international average daily volume was up 9.8%, supply chain and freight revenue increased 8.5%, and U.S. revenue was up 17.3% -- which is why it's no surprise that even with slightly lower margins, second-quarter adjusted earnings per share, or EPS, were $2.13, rising from $1.96 a year ago.

The second quarter was a "prove it" quarter for UPS. The company needed to show that rising B2C sales could drive the bottom line, not just the top line. It did not disappoint.

The fudge, sprinkles, and cherry on top of a strong second quarter is the company's dividend, which has grown by more than five times in the last 20 years. Even after its stock price surge, UPS still yields nearly 3% at the time of this writing. Aside from the dividend raises, it's worth noting that the company's free cash flow (FCF) well exceeds dividend obligations. Adjusted FCF for the first half of the year was $3.9 billion, or around $4.49 per share, which is already enough to cover dividends for the whole year at $4.04 per share.

Like UPS, Waste Management (NYSE:WM) is probably a company you encounter in everyday life -- but you may be unfamiliar with its stock. The company is an industry leader in the waste collection, transportation, and disposal business, recently moving forward with its plans to acquire the fourth-largest U.S. player -- Advanced Disposal (NYSE:ADSW).

Although it wasn't the knockout quarter that UPS had, Waste Management's second-quarter results were good -- given the circumstances. Total volumes declined just 10.3%, largely driven from declines in commercial, industrial, and landfill revenue. Residential volumes and revenue increased slightly from people staying at home during the pandemic -- but all other segments suffered some sort of decline.

Given the massive economic effect of COVID-19 on the industries that Waste Management serves, the fact that revenue for the first half of the year was down less than 5% is a win. Granted, Waste Management did suspend its share buyback program and cut spending. Also important is Waste Management's FCF, which fell roughly 4% from $440 million in the second quarter last year to $423 million. 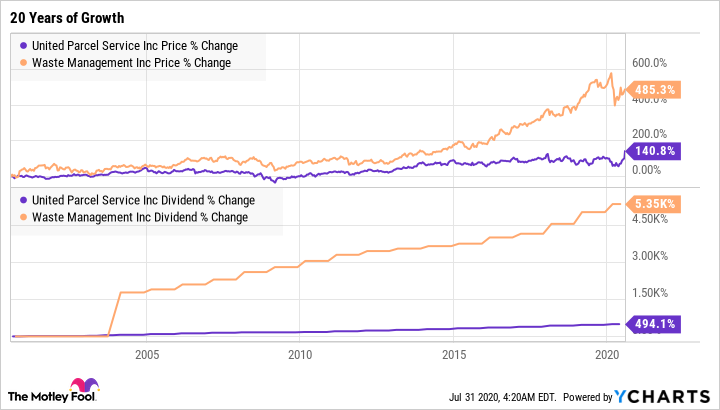 According to the company, it has raised its dividend "for more than 15 years with a compound annual growth rate of about 6% over the last five years." Waste Management yields 2% at the time of this writing.

There are three qualities that both UPS and Waste Management have that make them among the safest industrial dividends right now: Good earnings despite the economic effects of COVID-19, a track record of dividend growth, and FCF that is nearly double dividend distributions.

The strength of both companies' businesses, combined with cost-cutting measures and the suspension of share repurchases, has ensured that dividend obligations remain reasonable without overly pressuring the balance sheet.

With UPS shares at an all-time high and Waste Management shares trading at a premium, it's understandable that some investors wouldn't want to buy at this time. However, both industrial companies provide a great way to round out any portfolio, so adding them to a watchlist could prove to be a wise move.