Please ensure Javascript is enabled for purposes of website accessibility
Log In Help Join The Motley Fool
Free Article Join Over 1 Million Premium Members And Get More In-Depth Stock Guidance and Research
By Jim Halley - Aug 8, 2020 at 10:39AM

MetLife, Air Lease, and Seagate Technology are all trading well below their values, which makes them attractive buys, despite what the market thinks.

On the surface, the antipathy investors are showing the trio makes sense. People are dying from COVID-19 and interest rates are down, neither of which is good for the life insurance industry in general -- or so the thinking goes regarding MetLife, which is down more than 27% year to date.

People aren't flying because of coronavirus concerns, so that isn't good for the airline industry -- and that must mean the same for Air Lease, right? The aircraft leasing company is down 40% for the year. 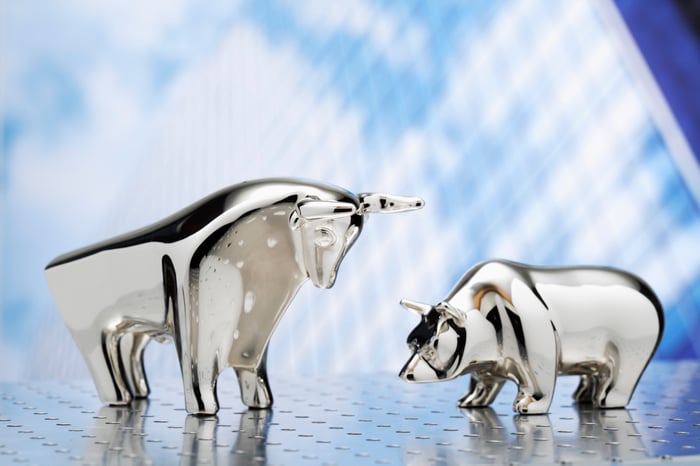 And Seagate Technology is down more than 20% for the year, with many investors concerned the company's falling profits may be a long-term trend.

However, if you actually look at the numbers, there are plenty of reasons the prevailing logic is bunkum regarding these value stocks.

Air Lease is in a stronger position than the airlines

Airline stocks have understandably taken a beating lately because the number of people flying has plummeted (never a good word when you're talking about airlines). However, lumping in Air Lease's stock with the likes of Delta Air Lines and Southwest Airlines doesn't make much sense.

Air Lease, based in Los Angeles, buys planes and leases them to commercial airlines. According to the company, its fleet as of June 30 consisted of 301 owned aircraft and 81 managed aircraft.

Air Lease said it already has 99% of its planes leased, and since these are triple-net leases -- under which the airlines pay for the taxes, insurance, and maintenance of the planes regardless of whether those planes are grounded or flying -- the money will continue to roll in unless the airlines go bankrupt. In many cases, the company has deferred rent to some airlines, but agreements are still in place that will require payment, and management said it had collected on 90% of its leases in the first quarter.

In second-quarter results reported late Thursday, the company appeared about to take off; revenue was $521 million, a boost of 10.6%, and net income of $143 million marked an increase of 15.9% year over year.

Another key factor in Air Lease's favor is that slowdowns in airplane manufacturing caused by problems with the Boeing 737 MAX and production costs for the Airbus A350 will boost demand for the Air Lease fleet, particularly when the airlines inevitably begin to ramp back up.

Until the stock inevitably rises, the company is paying a $0.15-per-share quarterly dividend, which computes to a 2.18% yield (a bit higher than the S&P 500 average of 2%). At its current price, its trailing-12-month price-to-earnings (P/E) ratio is 5.4.

MetLife is built for the long haul

The New York City-based insurance company has increased revenue and net income for four consecutive years. In the first quarter, before the full impact of the coronavirus shutdown, the company's net income was $4.4 billion compared with $1.3 billion the same quarter last year. The company also had $5.3 billion in cash and liquid assets -- plenty of money to tide it over. It's true that interest rates are down, but MetLife has a wide portfolio, and its investment income was $4.3 billion in the first quarter, a 1% gain year over year.

Its investments did take a hit in the second quarter; the total of $4.1 billion was down 13% year over year. Revenue fell as well, to $758 million, down from $1.4 billion in the same quarter in 2019. However, with the overall market back on the rise, the company said its equity investments will quickly lift its investment income.

The stock is ridiculously underpriced, with a criminally low trailing-12-month P/E ratio of 4.8, so it's a good time to buy.

And while you're waiting for shares of MetLife to bounce back, you can enjoy the company's quarterly dividend, which management bumped up to $0.46 per share this year. That's an increase of 4.5%, and according to the company, it's part of a 10.7% compounded annual growth rate since 2011. That works out to a yield of 4.8%, a nice incentive. The dividend appears safe, with a payout ratio of 30.1 (trailing 12 months). The chart below shows how far the three stocks are off their highs this year, and how that's not unusual in their industries, except for Seagate: 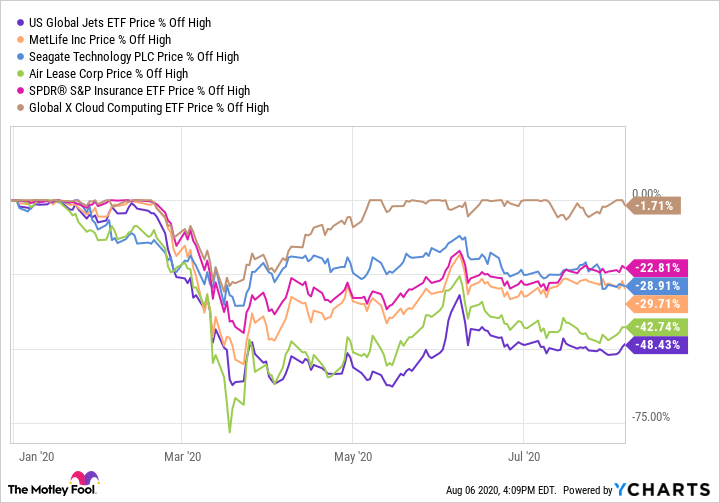 Seagate Technology is ready for a rebound

Seagate, a hard-drive maker based in Cupertino, Calif., closed its fiscal year on a rough note last month, with revenue and earnings down for the fourth quarter, year over year. Lost in that news was the fact that the company saw improved revenue for the year, particularly in mass capacity storage, where revenue was up 25%.

The coronavirus pandemic may have a bright side for the company, as lockdowns and stay-at-home orders are likely to drive more remote work and education. That means more storage, and that means more demand for Seagate's products.

There's another reason to like Seagate -- a hefty 5.8% yield on its $0.65 quarterly dividend. Like the prior two stocks, it's priced below its value, with a trailing-12-month P/E of 11.8. With the company's share price down more than 24%, this could present an excellent long-term buying opportunity for investors.