Please ensure Javascript is enabled for purposes of website accessibility
Log In Help Join The Motley Fool
Free Article Join Over 1 Million Premium Members And Get More In-Depth Stock Guidance and Research
By Alex Carchidi – Aug 9, 2020 at 7:05AM

These two stocks are probably undervalued, but that won’t last forever.

Biotech stocks are often prone to highly inflated or highly deflated prices stemming from hyped news cycles. Between difficult-to-interpret news about a company's clinical-trial results and the sheer length of the drug-development cycle, some stocks spend months languishing because of the market's ire. But for investors with a long-term outlook, a biotech stock taking an unwarranted beating could be a great opportunity to buy in at a discount.

Both of the stocks I'll discuss today have had a rough year so far, performing worse than the market by a substantial margin. Furthermore, both lost out to the market over the last three years, potentially making conservative investors anxious. Despite their recent difficulties, however, these stocks have a few key value-investment factors in their favor, and there's reason to believe that the market will catch on soon enough.

Alexion Pharmaceuticals (ALXN) produces a handful of niche drugs for rare diseases like hypophosphatasia (a genetic disorder affecting growth of bones and teeth), meaning that the markets it competes in are inherently small. This may dissuade some investors, but a closer look at the company's finances indicates that the company is making the most of its position.

In particular, free cash flow has risen by 172.5% in the last few years, suggesting that the company is gaining financial momentum. Similarly, Alexion's normalized trailing-12-month (TTM) diluted earnings per share (EPS) have grown by more than 260% over the past three years, and its TTM revenue number has increased by 59.5% in the same period.

There's also evidence that points to Alexion as a value stock. Its TTM price-to-earnings (P/E) ratio sits at 9.9, significantly lower than the biotech industry's average of 77.6. This means that new investors will pay less for each fraction of the company's earnings than they might with other industry stocks. Finally, Alexion's price-to-book value (P/B) ratio clocked in at 2.2 in the most recent quarter, compared with the industry average of 6.2, which indicates that each share is cheaper than average relative to the company's assets. As these ratios rise to reach the rest of the industry, it will be a strong sign that the stock is becoming less of a bargain. 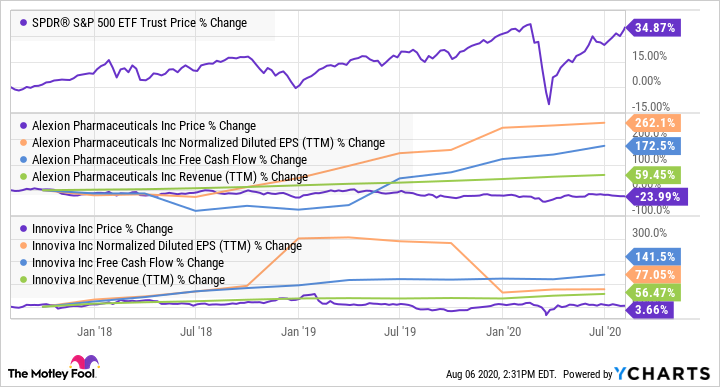 With a market cap of $1.4 billion, Innoviva (INVA -2.02%) is much smaller than Alexion, and it's also in a different line of business. In short, Innoviva curates royalty-bearing assets rather than developing or manufacturing drugs of its own. Most of the company's royalty rights are for respiratory drugs developed by GlaxoSmithKline (GSK 0.24%).

Thanks to its careful cultivation of new royalty rights, its TTM revenue has risen 56.5% since 2017, and its free cash flow was up by 141.5%. These positive results belie even more favorable data, including year-over-year quarterly earnings growth of 103.6%. So why hasn't the stock beaten the market, and why is it so cheap?

There are two factors that might be to blame. First, the stock's dividend peaked in 2015 before sharply tapering to zero, which might have irritated shareholders. Second, the company's earnings contracted during 2018.

But with an aggressive P/B ratio of 3 in the most recent quarter and a trailing 12-month P/E ratio of 6.7, Innoviva is still a bargain in the context of the biotech industry's averages. Given that this year saw its trailing P/E rise for the first time since before 2016, the market may soon notice the company's strong fundamentals and spur price growth once again.