Please ensure Javascript is enabled for purposes of website accessibility
Log In Help Join The Motley Fool
Free Article Join Over 1 Million Premium Members And Get More In-Depth Stock Guidance and Research
By Zhiyuan Sun - Aug 9, 2020 at 6:32AM

Here are the two best marijuana stocks to choose from in a sector that's on the edge of a massive turnaround.

Since the beginning of the year, the marijuana sector has underperformed dramatically. The effects of COVID-19, oversupply in Canada, and falling consumer spending are all leading investors to get out of weed stocks en masse, with little regard for long-term outlook.

However, the market has changed dramatically from even just a quarter ago. There are now 1,000 marijuana stores open in Canada, and a federal bill to legalize weed in the U.S. was proposed by Sen. Tina Smith (D-Minn.) on July 31. When an entire sector becomes battered, it often creates opportunities for investors to buy top-performing businesses at a bargain price. Today, let's take a look at two companies that fit this category. 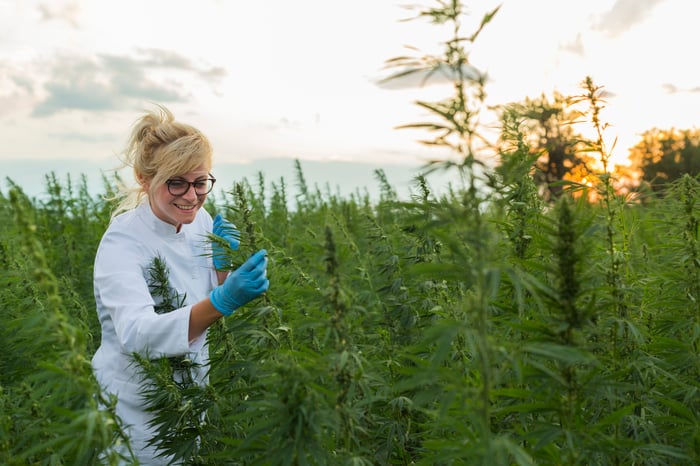 A cannabis company with a solid track record

The fourth quarter of 2020 will be Aphria's (APHA) fifth consecutive quarter of generating positive adjusted earnings before interest, taxes, depreciation, and amortization (EBITDA). During the last quarter of Aphria's 2020 fiscal year, the company grew its adjusted EBITDA over 40-fold, from $209,000 Canadian dollars in Q4 2019 to CA$8.6 million. Those are pretty tough numbers for other industry competitors to beat, especially during these uncertain times.

Moreover, the company was able to maintain its 52.9% gross margin in selling cannabis. As for other achievements, Aphria also repurchased CA$127.5 million worth of convertible notes during Q4 2020, while possessing CA$497.2 million in cash and cash equivalents to expand its business growth even further.

This company excels at growth. In fiscal 2020, which ended May 31, the company grew its revenue by a staggering 129% to CA$543.3 million, compared with CA$237.1 million in 2019. At the same time, Aphria's selling price for its cannabis products increased, while its cash cost decreased. With robust revenue growth, increasing efficiency, and a track record of realizing profits, Aphria is definitely one of the top stocks to buy for the month.

If that isn't enough, the company is trading at a market cap of just CA$1.8 billion. Consider the largest company in the sector, Canopy Growth (CGC -4.25%), which has a market cap of $6 billion but is still not profitable on an adjusted EBITDA basis.

While Aphria's momentum has been nothing short of remarkable, one important thing to note is that the company divested all of its U.S. cannabis assets in September 2018. But fellow Canadian marijuana company Cronos Group (CRON 0.66%) has begun operations in the U.S., positioning itself to ride the legalization wave. In the short six months since it began this venture, the company reported $4.4 million in revenue and a 38% gross margin, including $2.2 million of sales in the most recent quarter. That's pretty impressive, considering the company is facing an inventory crisis in the Canadian markets.

As a result of oversupply, the company recorded $18.3 million in revenue in the first six months of 2020, but gross profit was negative because of inventory writedowns. In context, this makes the company's 72% year-over-year revenue growth seem less appealing.

However, the company does have a massive advantage stemming from a $1.8 billion investment from tobacco giant Altria (MO 0.87%). As of the fiscal second quarter of 2020, the company has about $1.1 billion in cash and $213.6 million in short-term investments left over from this infusion, compared with an operating loss of about $72 million in the past six months. Hence, Cronos has more than enough cash to fund its successful U.S. expansion without further dilution to shareholders. For investors with a long-term horizon and who can weather through short-term business woes, Cronos is an ideal weed stock.