Exactly when you invested makes a big difference.

Imagine you're an investor in early 2009 considering buying shares of Pfizer (PFE 3.06%). The U.S. is in a deep recession. Many investors are still worried after the market meltdown only a few months earlier. Sales are slipping for Pfizer's cholesterol drug Lipitor, the best-selling drug in the world. Several of the company's other top drugs are also under pressure.

Would you have bought Pfizer stock despite the headwinds? Or would you have looked for a better alternative? It's hard to know for sure what choice you would've made more than 11 years ago. But we can see in retrospect how buying the pharma stock would have paid off. Here's how much money you'd have today if you had invested $1,000 in Pfizer during the last recession. 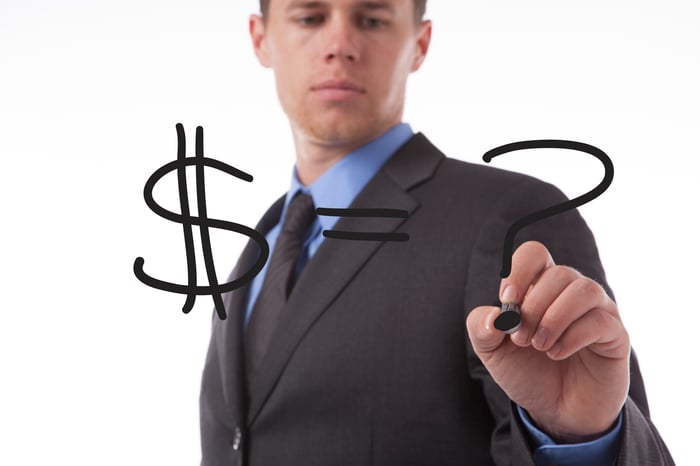 A $1,000 investment in Pfizer in late December 2007, around the beginning of the recession, would have bought 44 shares. Today, those shares would be worth a little over $1,690.

Had you instead bought Pfizer stock on March 2, 2009 -- its lowest point during the last recession -- your $1,000 would have scooped up 85 shares. (You could have almost bought 86 shares, but partial shares weren't an option back then.) If you held onto those shares, you'd now have nearly $3,270.

What if you had waited to buy Pfizer shares until close to the end of the recession in late June 2009? You would've been able to purchase 67 shares. Fast forward to the present day, and those shares would be worth almost $2,580.

Your timing would have made the difference between obtaining a return of 69%, 158%, or 227%. Actually, though, your returns would have been greater in any of the three scenarios. Pfizer paid dividends throughout the period.

How important were these dividends? If we use the best-case scenario of buying Pfizer shares at its bottom, you'd have a gain of more than 400% (roughly $5,000 today) instead of a gain of 227%.

Even though Pfizer delivered solid gains since the last recession, the S&P 500 index fared even better with a total return of more than 490% since March 2009. Why did Pfizer underperform by so much?

The main factor hurting Pfizer was what many referred to as its patent cliff. Pfizer lost U.S. patent exclusivity for Lipitor in 2011. The next year, it lost U.S. exclusivity for blockbuster erectile dysfunction drug Viagra and overactive bladder treatment Detrol. In 2013, anti-inflammatory drug Celebrex went off-patent. Pfizer managed to extend its patent protection for Lyrica a little longer than originally expected, but the nerve pain drug still lost exclusivity last year.

With sales for so many of its top-selling drugs declining, it's not surprising that Pfizer's shares didn't generate overly impressive gains over the last 11 years. But there was also another less obvious reason why Pfizer didn't deliver the kinds of returns that investors hoped for: A big dividend cut in 2009.

Pfizer halved its dividend payout in 2009 to free up funds to make a massive acquisition of Wyeth. It took nearly a decade for the company's dividend to return to pre-recession levels. However, the Wyeth deal added much-needed revenue with products including pneumococcal vaccine Prevnar and anti-inflammatory drug Enbrel.

All of that is water under the bridge. The more important question is: Should you invest $1,000 in Pfizer now that we're in another recession?

The good news is that Pfizer is in a much stronger position in 2020 than it was during the last recession. It has multiple drugs with fast-growing sales, notably including blood thinner Eliquis and rare-disease drugs Vyndaqel and Vyndamax.

Even better, Pfizer will soon be rid of its low-growth and no-growth older drugs like Lyrica with the planned merger of its Upjohn unit with Mylan. Pfizer's dividend will be a little lower after the transaction closes but will still be attractive.

Pfizer's pipeline appears to be in good shape as well. In particular, investors are excited about the prospects for Pfizer's and BioNTech's COVID-19 vaccine candidate BNT162b2. The two companies recently won a $1.95 billion deal with the U.S. government to supply 100 million doses of the experimental vaccine.

My view is that buying Pfizer is a smart move right now. I think the pharma stock will outperform the S&P 500 between now and the next recession.