Please ensure Javascript is enabled for purposes of website accessibility
Log In Help Join The Motley Fool
Free Article Join Over 1 Million Premium Members And Get More In-Depth Stock Guidance and Research
By Adam Levine-Weinberg – Aug 9, 2020 at 11:36AM

Virgin Galactic wants to develop a supersonic jet capable of carrying up to 19 passengers at Mach 3. It's a bad idea.

Last week, Virgin Galactic (SPCE -2.88%) delayed its first commercial space flight again: this time to 2021. However, the buzzy aerospace start-up offered investors and fans a new reason to be excited, announcing that it had completed the initial "Mission Concept Review" for a new supersonic jet that would travel at Mach 3 (three times the speed of sound, or roughly 2,300 miles per hour).

Virgin Galactic's management appears to be very excited about this concept. Earlier this year, then-CEO (and current chief space officer) George Whitesides argued that the annual revenue opportunity from supersonic passenger travel could be $10 billion to $15 billion. Unfortunately, the business plan is unlikely to live up to the hype.

The design concept revealed by Virgin Galactic calls for a small cabin seating between nine and 19 passengers, along with a triangular delta wing and engines supplied by Rolls-Royce. Rolls-Royce has experience in this area, having built the engines for the Concorde supersonic jet decades ago. The plane would reach Mach 3 at an altitude exceeding 60,000 feet. 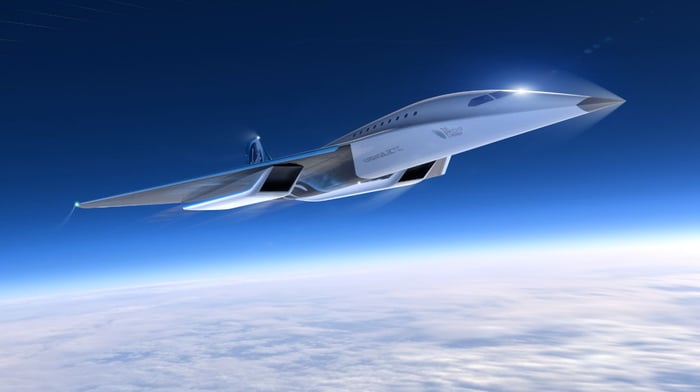 The commercial failure of the Concorde -- the only supersonic jet ever to see regular passenger service -- is a big reason for caution. Despite high hopes initially, airlines lost interest due to development delays and cost overruns. Only 14 Concorde jets were ever used for commercial flights, and the only customers were British Airways and Air France, which faced government pressure to fly the Concorde, which was developed by a British-French joint venture.

Aside from the high cost, there were numerous problems with the Concorde concept. Most notably, many countries (including the U.S.) have banned supersonic flights over land due to the "sonic booms" that come from breaking the sound barrier. While the FAA is reviewing its noise standards for supersonic flight, it is not reconsidering the ban on supersonic flight over land. Unless policies change, these restrictions dramatically reduce the addressable market for supersonic travel.

Supersonic travel is also extremely environmentally unfriendly. The Concorde burned about 6,700 gallons of fuel per hour. Next-generation supersonic jets are likely to burn five to seven times as much fuel per passenger as comparable subsonic jets, according to the International Council on Clean Transportation. Leaving aside the cost of all that fuel, the environmental impact could lead to regulatory issues and cause many people to avoid supersonic flights. Using sustainable jet fuel (such as biofuels) would only partially address this issue.

A Mach 3 jet would make round-trip travel in one day feasible for 85% of the most popular global airline routes, according to Virgin Galactic's management. That may be true in theory, but the nature of time zones limits the utility of long-haul supersonic travel.

For example, on the popular New York-London route, a traveler taking a 6 a.m. flight out of New York wouldn't get to London until 2 p.m., assuming a realistic gate-to-gate travel time of three hours. That might be fine if the goal is to squeeze in a single two-hour meeting. But if you need a full day in London, a traditional subsonic redeye flight is more convenient, given that virtually all full-service airlines have flat-bed seats in international business class today. By contrast, taking a supersonic redeye flight would mean arriving in London with no time to sleep.

Supersonic travel would be more useful on transpacific routes -- assuming the plane had sufficient range. Many major routes from the West Coast to Asia and Australia are 6,000 miles long or more. The Concorde didn't have enough range to serve such routes. Virgin Galactic may opt for greater range, but that would come at the cost of even higher fuel burn. 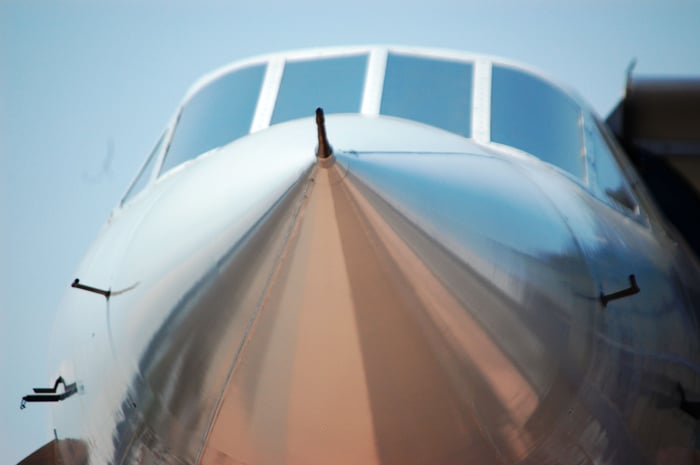 A small chance of success

Whereas the Concorde at least aimed to serve moderately wealthy passengers (with the potential to seat up to 128 customers), Virgin Galactic's Mach 3 concept is basically a high-speed luxury business jet. Ticket prices will be lower than the $250,000 Virgin Galactic plans to charge for brief trips into space, but not by all that much.

Sales of large, long-range business jets have been lackluster in recent years. Virgin Galactic is unlikely to do any better. The appeal of a jet capable of flying Mach 3 will be severely limited by the acquisition cost, operating costs, environmental impact, and lack of utility for many heavily traveled routes.

Perhaps Virgin Galactic will find a way to add range, mitigate environmental impacts, and bring the cost of supersonic travel down to a reasonable level. However, I wouldn't count on it, and neither should you. Investors should hope management sticks to its main niche of space travel and doesn't throw away lots of money trying to develop a supersonic jet that is extremely unlikely to be profitable.