The Air Force is reinventing itself -- as an air force of robots.

For more than a decade, the U.S. military has been looking forward to the day when fighter pilots would no longer fly fighter jets -- because the jets would fly themselves. With the inauguration of the Air Force's new drone project, dubbed "Skyborg Vanguard," that day looks closer than ever.

A project comprising both hardware and software elements, Skyborg Vanguard was first announced late last month when the Department of Defense's daily digest of contract awards described a $400 million indefinite-delivery/indefinite-quantity contract to be split among four of its biggest defense contractors.

Skyborg Vanguard envisions the development of drone aircraft that can fly autonomously on missions "that are too strenuous or dangerous for manned crews." Initially, such drones will play a supporting role, augmenting the capabilities of human pilots operating in the same battlespace by providing them with "greater situational awareness and survivability during combat missions." But over time, autonomous drones might evolve to eliminate the need for human pilots entirely. 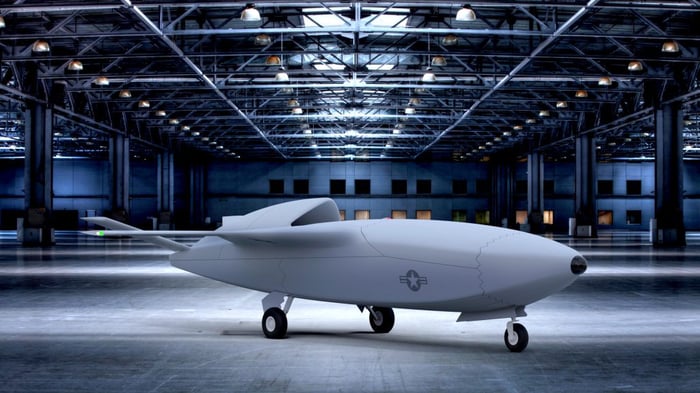 Boeing (BA 0.52%), Northrop Grumman (NOC -1.58%), Kratos Defense & Security (KTOS 0.74%), and privately held General Atomics were all named as recipients of this contract, which the Pentagon says aims to develop "autonomous attritable aircraft capable of achieving a diverse set of missions to generate massed combat power; delivering a future Air Force which can deter, blunt and defeat peer adversaries" -- ideally by the contract's due date of July 2026.

Recipients of the award, which works out to about $100 million per company over the next six years, will be expected to develop and "deliver missionized prototypes" of unmanned aerial vehicles for use in "operational experimentation." Drones developed under the program will work in concert, cooperating to achieve their missions. To this end, the four contractors will also develop "modular hardware and software payloads that will incorporate the Skyborg autonomy core system and enable manned/unmanned teaming."

... and why should investors care?

Before we go any further -- "Skyborg Vanguard." Could the U.S. Air Force have possibly come up with a cooler name for its latest drone fighter jet project?

(Correct answer: No. It could not. In fact, right now, James Cameron is gnashing his teeth and wishing he'd thought of the name for his next Terminator movie.)

But Skyborg Vanguard is more than just a cool name -- it's a forward-thinking concept. According to the Air Force Research Laboratory (AFRL), the Air Force will use the program to foster the development of new and more capable low-cost autonomous drone aircraft capable of surviving in "contested environments."

Thus, not only will sending robots downrange keep Air Force pilots out of harm's way. The drones themselves will be designed for survivability. (Precisely how is not stated, but presumably this would include incorporating stealth characteristics and/or active defensive measures such as flares or electronic countermeasures -- such as Raytheon has already demonstrated with its MALD technology.)

Multiple types of drones are envisioned, working in "teams." And this in turn implies that multiple companies' drones may make the cut. In other words, this will not be a winner-takes-all contract. (It may, however, be a more significant contract for some companies than for others. Relative to a company like Boeing, for example, which did $76.5 billion in business last year according to S&P Global Market Intelligence data, $100 million is just a drop in a very big bucket. Relative to a smaller contractor like Kratos, with just $700 million in annual revenue, $100 million is a much bigger deal.)

And Skyborg is more than just the drones themselves. It's an entire "autonomy-focused capability," says AFRL (emphasis added), and one that seems designed to evolve as more and more capable drones are brought online over time. By making the Skyborg Vanguard software common across the drone fleet, AFRL believes this will facilitate "continuous hardware and software innovation" as new technologies are developed and new drones designed and incorporated into the fleet.

In short, no matter which company builds a given drone, the goal will be for it to easily operate in concert with other drones working on the same Skyborg Vanguard system. Unlike the Joint Strike Fighter program (the one that gave rise to Lockheed Martin's F-35 -- and to then-Joint Chiefs of Staff Chairman Adm. Mike Mullen's famous prediction that the F-35 would be "the last manned fighter" built for the Air Force -- Skyborg Vanguard could give rise to multiple contracts benefiting multiple defense contractors for years to come.