Please ensure Javascript is enabled for purposes of website accessibility
Log In Help Join The Motley Fool
Free Article Join Over 1 Million Premium Members And Get More In-Depth Stock Guidance and Research
By Lee Samaha – Aug 10, 2020 at 10:48AM

The company appears to be in recovery mode now and looks set for a multi-year expansion in sales and profits.

Shares of heating, ventilation, air conditioning, and refrigeration (HVACR) company Carrier Global (CARR -2.04%) soared by 22.6% in July according to data provided by S&P Global Market Intelligence. The move comes as a result of an improving environment for the HVACR market and a de-risking in the stock itself.

Management discussed its end markets during the earnings call on July 30 and it's clear that there was a big improvement in June that carried through into July as well. 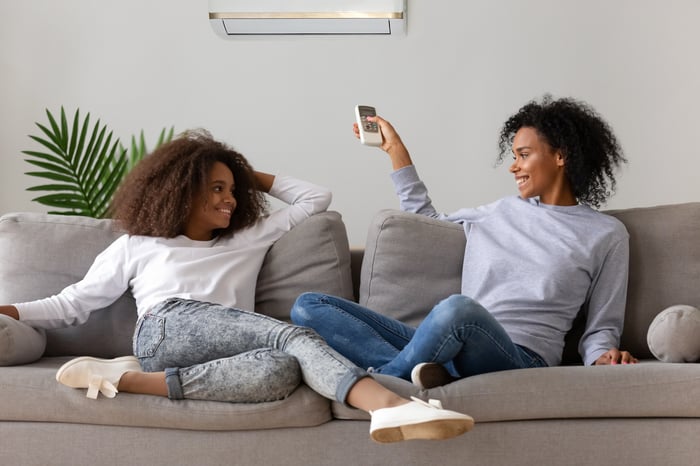 Carrier generates 80% of its sales in the U.S. and European Union. Together, orders in these regions were down 25% in April and 15% in May on a year-over-year basis. However, U.S. HVAC orders bounced a whopping 40% in June -- led by a 100% increase in U.S. residential orders. Meanwhile, commercial HVAC orders "were up low single digits in the U.S. in June after being down 25% in April and May" CEO David Gitlin said on the earnings call.

The E.U. hasn't quite been as strong, but the trend is moving in the same direction. "E.U. orders have been down modestly compared to last year" in July, Gitlin said. It's a good result considering Europe, Middle East, and Africa (EMEA) orders were down 30% in April, down 25% in May, and down 15% in June.

The improving trend caused management to increase its full-year guidance from that given in the first-quarter earnings presentation in May. Management now sees:

The relative improvement in its end markets comes at exactly the right time to allay fears that the market may have had around Carrier's debt levels. Carrier holds $11.7 billion in net debt and given that its credit agreement and term loan had a covenant attached to it -- debt to earnings before interest, depreciation, and amortization should not exceed four times -- there were concerns that Carrier would breach it.

However, the positive second-quarter earnings and improvement in full-year outlook helped to de-risk the possibility of a breach. CFO Tim McLevish also said Carrier would modify its covenants in its term loan and its credit agreement.

Carrier was always going to be the most interesting of the industrial companies created out of the breakup of United Technologies. The stock's performance since its listing in April (up 141% at the time of writing) has been spectacular. Investors will be hoping that management can continue to cut costs and grow revenue as the economy improves in 2021.

Does This Red Hot Stock Have Room To Run?