There's a lot going on with United Technologies (NYSE:RTX), and investors can be forgiven for failing to keep up. Just when you thought its future was clear -- a breakup into three constituent parts that will hopefully unlock the conglomerate discount and lead to a rerating overall -- CEO Greg Hayes goes and arranges a merger with Raytheon (NYSE:RTN). That said, there's one business that stands out as having the best potential for after the separation, so let's take a look at why.

It's not Raytheon Technologies 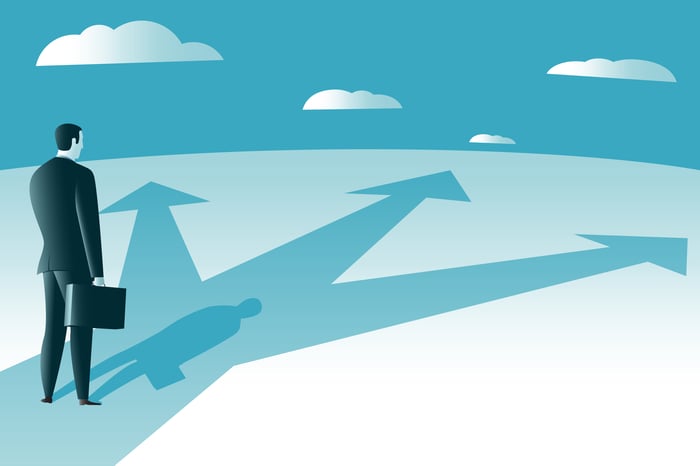 There's little doubt that most of the media attention is on the merger proposal, and to be fair, the logic behind the deal looks like a good one. There's little crossover between the two businesses, and the defense business of Raytheon should provide a relatively stable stream of cash flows to support investment in big-ticket items like Pratt & Whitney's geared turbofan (GTF) engine. It also holds out the promise of enabling Pratt to produce a GTF for wide-body aircraft -- General Electric investors beware.

However, it's a deal that's likely to be highly complex, and given that United Technologies has only just started integrating its acquisition of Rockwell Collins, a company that has held aircraft interior and seating manufacturer BE Aerospace for only a couple of years, it's hard not to think there are going to be growing pains along the way.

Nor is it Otis

The world's leading elevator and escalator company is a powerful cash cow of a business with over 2 million units under maintenance. That's the good news; the bad news is that margin and profit have been declining in recent years.

To be fair, this is partially self-inflicted. Otis had been losing market share for equipment in the all-important and highly price-competitive China market (the Asia-Pacific region contributes slightly over a third of Otis sales).  so management decided to cut prices in order to drive unit sales growth.

The idea is that new unit sales will drive service revenue growth in the future, particularly as Otis is augmenting its service offering in China by rolling out mobile devices for its personnel so they can use the Internet of Things (IoT) to better service equipment.

On a positive note, there are signs of improvement, notably on equipment unit sales, and Hayes thinks Otis' margin will improve in the second half of 2019, but investors won't feel fully confident until they can see the improvement in the numbers.

Why Carrier is the most interesting United Technologies business

There are three key reasons. First, Carrier is the business that's been the most hamstrung in being part of a conglomerate. This is a particularly important point because the general consensus is that the heating, ventilation, and air-conditioning (HVAC) industry is set for a period of industry consolidation. As such an independent Carrier will be more able to participate in industry consolidation. .

Second, the long-term fundamentals for the HVAC industry look excellent. Not only is global growth shifting to hotter countries, but their populations are also urbanizing. Meanwhile, the regulatory movement toward environmental sustainability and energy productivity in the developed world should favor higher quality HVAC players like Carrier.

In addition, the need for transport and commercial refrigeration given the growth in online grocery store sales -- Carrier generates slightly more than half its sales from HVAC, with the rest coming from the fire & security and refrigeration businesses.

Third, it's fair to say that Carrier's key rival, Ingersoll-Rand's (NYSE:TT) Trane has significantly outperformed Carrier in recent years, particularly with regard to margin improvement in the face of rising commodity prices. Clearly there's an opportunity to improve performance in line with its peer.

The United Technologies breakup will create some interesting investment options in the future, but it's the business with the least amount of media attention that investors should be focusing on. Moreover, while the exact details of how much debt is going to be loaded into each company, management said that United Technologies will contribute $24 billion of debt to Raytheon Technologies and given that United Technologies' net debt is currently around $40 billion, it looks likely that Carrier won't be overloaded with debt.

All told, the opportunity to improve performance at Carrier is clear, and the execution risk is arguably a lot smaller than at Otis or the future Raytheon Technologies.