Please ensure Javascript is enabled for purposes of website accessibility
Log In Help Join The Motley Fool
Free Article Join Over 1 Million Premium Members And Get More In-Depth Stock Guidance and Research
By Lee Samaha - Updated Apr 29, 2019 at 8:22AM

The industrial conglomerate remains on track to release value for investors when it spins off Carrier and Otis next year.

The case for buying stock in United Technologies (RTX -0.19%) has long been built on the idea that the value of the sum of its parts is greater than what they trade on as part of an industrial conglomerate. It's a fashionable idea,  and one that encouraged management to split the company into three separate parts. But the separate businesses still need to perform well in the run-up to the spin-offs, so let's take a look at current progress before judging whether the stock is a good value or not.

It's no secret that the company's aerospace operations (Pratt & Whitney and Collins Aerospace) are performing well. Honeywell International's (HON -1.50%) aerospace segment grew organic revenue 10% in its first quarter, with commercial original equipment manufacturer (OEM) organic revenue up 10% and commercial aftermarket up 8%, and United Technologies more than matched its peer's performance.

Collins Aerospace grew commercial OEM and aftermarket sales at double-digits in the quarter, a strong performance that caused management to raise overall full-year EPS guidance to a range of $7.80-$8.00, compared to a previous range of $7.70-$8.00. If you are wondering why management wasn't more aggressive on guidance, it's probably due to the potential for a $0.10 impact from the reduced production rate on the Boeing (BA -5.07%) 737 MAX.

The other aerospace business, Pratt & Whitney (aircraft engines), also had a good quarter, with organic sales up 12%. The big news here is that there's no news. Specifically, geared turbofan (one of two engine options on the Airbus A320neo) production is tracking as planned, and there don't appear to be any new technical issues with the engine. Given the well-documented issues with the 737 MAX, there might be an opportunity for the geared turbofan to benefit from any pickup in orders for the Airbus A320neo in the future.

All told, the aerospace businesses are on track, and management affirmed is confidence in hitting its objectives in 2019.

Before getting into the details on Otis (elevators), Carrier (heating, ventilation, and air-conditioning), or HVAC (fire and security products and refrigeration), here are the segment details from the first-quarter.

As you can see in the table above, the headline numbers don't look great at the two commercial businesses. However, in both cases management sounded positive on the underlying fundamentals.

Starting with Carrier, management believes it will be a tale of two halves. The vice president of investor relations outlined the expectation that a decline in earnings in the first-half will be "more than offset by growth in the second half of the year" due to a combination of "organic growth, aggressive cost reduction and easier year-over-year compares on commodity, tariff, logistics expenses and foreign exchange."

CFO Akhil Johri would later reiterate the argument, but given that organic equipment orders declined 2% in the quarter -- and, as you can see below, margin performance has been disappointing for some time -- it's time for Carrier to deliver. It's notable that Carrier's rival Trane (an Ingersoll-Rand company) has expanded margin and profitability in the same period. 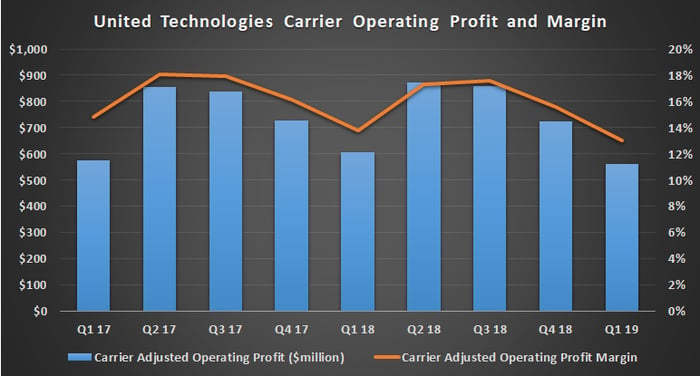 Turning to Otis, the first quarter was relatively better on an underlying basis. New equipment orders were down 1%, but in the all-important China market there are signs of improvement. Orders in China were up 8% in value, "benefiting from pricing and mix with unit orders up slightly," which "continues the trend of stabilization in pricing on new equipment orders in China," according to Lane.

In a nutshell, Otis has recently been focusing on expanding unit sales and investing in technological solutions -- such as mobile devices for its service personnel -- and it's a good sign that equipment orders are picking up in China. CEO Greg Hayes believes "as you think about Otis, growing earnings throughout the course of the year, margins should be improving as well."

The aerospace businesses are doing fine, and the commentary on Carrier and Otis sounds positive. However, there's a lot of work to do for the commercial businesses to hit guidance and deliver the kind of second-half improvement that management is forecasting.

All told, United Technologies still looks like a good value, but investors' patience will wear thin if Carrier and Otis don't start to demonstrate some margin improvement in the coming quarters, something to keep a close eye on.