Please ensure Javascript is enabled for purposes of website accessibility
Log In Help Join The Motley Fool
Free Article Join Over 1 Million Premium Members And Get More In-Depth Stock Guidance and Research
By Lee Samaha - Updated May 1, 2019 at 11:46AM

A look at how the investment thesis for each stock has been impacted by recent tragedies.

General Electric (GE -0.65%) and The Boeing Company (BA -5.07%) have a lot in common. Their futures are intrinsically linked through their common interest in aviation, as General Electric engines and systems are used on many of Boeing's airplanes. And both companies have suffered in the aftermath of the two recent Boeing 737 MAX crashes. Let's take a look at the salient points behind recent events in order to see which stock might be worth buying -- or avoiding -- as a consequence.

There's no point avoiding the elephant in the room: The recent tragedies will definitely have an impact on both companies, although it's hard to know exactly what that will be near-term or, more importantly, in the long-term. 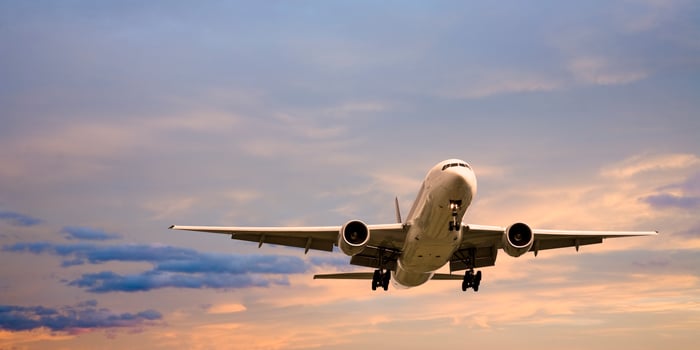 Aside from possible legal liabilities Boeing might have to pay, the grounding of the Boeing 737 MAX and consequent production cut from 52 airplanes per month to 42 airplanes per month (starting in mid-April) are going to hit Boeing's profitability -- not least because its margin expansion is partly contingent on volume growth.

Of course, this will also have an impact on General Electric, because it has a joint venture with Safran, called CFM International, that makes LEAP engines for the 737 MAX. In GE's case, the near-term impact is rather harder to assess, for two reasons.

First, CFM is playing catch-up on LEAP production, so a slowing of 737 MAX production might ease some production tension. For example, on the last earnings call GE's CFO Jamie Miller said: "We're still behind on deliveries by about four weeks, but the business expects to be back on schedule by mid-2019." Moreover, the delays are believed to be on the LEAP-1B for the Boeing 737 MAX, rather than the LEAP-1A, which is used for the Airbus A320neo family.

Second, producing LEAP engines has a negative impact on GE Aviation's margin, so producing less of them could actually lead to a near-term increase in profitability. ] o be clear,T though, the LEAP engine will generate significant earnings and cash flow from aftermarket/service revenue in the future, and the last thing GE wants to do is to have to slow LEAP production.

Both companies are going to see a near-term impact from the recent events, which will definitely be negative in Boeing's case. But what about long-term impacts?

The glass half full

The positive scenario sees Boeing successfully providing a software update to its Maneuvering Characteristics Augmentation System (MCAS) to add extra layers of protection if the angle of attack (AOA) sensors give erroneous information.

For reference, the AOA sensors are like weather vanes, and are used to measure the difference between a wing's chord line and the direction of air flowing past it. With an elevated level, the plane can stall, so MCAS (a computer-controlled system on the 737 MAX) pushes the nose down automatically. Unfortunately, it appears that erroneous information from an AOA sensor caused MCAS to be triggered, and pilots from both Lion Air and Ethiopian Airlines were unable to stop the plane crashing.

Assuming an optimistic outcome, the 737 MAX would be flying again in the coming weeks. Meanwhile, confidence could be rebuilt, just as consumers regained their confidence in Airbus after it had a similar problem with erroneous information from an AOA sensor in 2014 -- that time pilots were able to save the plane by disengaging a sensor.

The glass half empty

The pessimistic outlook sees the risk that the problem could turn out to be something more fundamental to the Boeing 737 MAX -- something that would hurt Boeing, and, in turn, General Electric.

Looking at the two preliminary reports on the separate crashes, the data is clear that, in both cases, one AOA sensor was giving erroneous information. Indeed, the Ethiopian Government report summary states that "after takeoff, the Angle of Attack sensor recorded value became erroneous."

It's a very rare occurrence, but not unheard of. It happened on two Airbus planes previously, resulting in a crash near Perpignan in 2008 and an incident near Bilbao in 2014. In both cases two AOA sensors in the plane gave erroneous readings -- believed to be caused by them freezing as the planes ascended into subzero temperatures.

The Boeing 737 MAX issues are, at this stage, much harder to understand. Is it a mechanical issue with the AOA sensor, or a software problem? Is it something to do with a combination of the 737 MAX design and ground crew actions that damaged the AOA sensor? Is it a mere coincidence that two 737 MAX plans have received erroneous data from AOA sensors within six months of each other?

Cautious investors will likely avoid both stocks until a clear cause of the AOA data failures is identified. After all, even if the 737 MAX gets back into operation soon, an AOA failure could occur again in a few months. The software update will help avoid a crash, but it would still be highly concerning if the AOA data issue wasn't resolved properly.

A more optimistic view sees the software update as sufficient to restore confidence in the 737 MAX, and feels confident that the problem with the AOA data failure will be identified -- after all, Airbus did not suffer significantly from its issue in 2014. On that basis, Boeing probably has more upside potential, so if you are inclined to believe in the positive scenario then Boeing is the better buy.