Why General Electric, Honeywell International, and United Technologies are breaking up -- and why it's good news.

United Technologies' ( RTX -0.67% ) breakup announcement was pretty much the sounding of the death knell for industrial megaconglomerates. It's a business model distinctly out of fashion, and last year saw the trend away from it accelerate, with General Electric ( GE -2.58% ) and Honeywell International ( HON -0.24% ) also taking action to become more focused companies. Let's take a look at what's going on and how investors should think about investing in these companies.

In the glory days of the industrial conglomerate, it was all so easy. Investors bought stock and benefited from a secure and growing dividend supported by the various earnings and cash flow streams from the diverse set of businesses owned by the conglomerate. It didn't matter if one of the businesses -- say, GE Aviation or Honeywell's building technologies or United's Otis elevators -- was having a bad year, because the other businesses would support it. 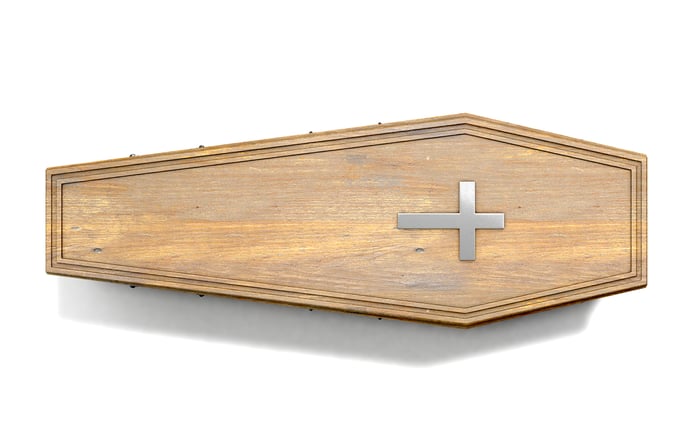 In the end, it was all about the benefit of scale and diversity for the investor and the company. Meanwhile, earnings and dividends kept growing. So what went wrong?

Why industrial conglomerates fell out of fashion

There are probably many factors, but two of the most salient are as follows.

First, there's a growing realization that more focused companies perform better, and therefore they would be more productive if separated from the conglomerate structure.

Indeed, when United Technologies made its breakup announcement, CEO Greg Hayes candidly declared that "First and foremost, we believe that focused companies lead to improved operating discipline." That's a conclusion reached by studying "74 different spin transactions that have occurred over the last 10 years," according to Hayes.

He went on to disclose that Carrier and Otis didn't make investments "over the last decade that they would have made as an independent company," and he lauded the benefit of each company having its own capital structure and being able to make "capital allocation decisions to its particular business model." The latter also was a key reason behind Danaher's ( DHR -0.99% ) decision to spin off Fortive.

The second reason is that the market didn't appear to be giving stocks the kind of valuation premium that they commanded in the past. In fact, in the case of United Technologies, there was a clear discount to what the various business might be valued at if they were separately run -- a fact not lost on activist hedge fund managers who were pushing for a breakup.

One possible reason for the conglomerate discount is the growth in popularity of exchange-traded funds, or ETFs. With a sector ETF, investors can buy a basket of stocks in one industry. Therefore, if you liked the aviation and construction industries (Honeywell and United Technologies), you could just buy ETFs in these industries rather than buying one (potentially risky) stock.

In other words, why buy an industrial conglomerate when you can de facto construct one yourself with ETFs and diversify risk in the process?

Honeywell spun off two companies in 2010 -- its automotive turbocharger business Garrett Motion and home-products company Resideo Technologies -- while General Electric is in the process of separating GE Healthcare, GE Transportation, its existing stake in Baker Hughes, and myriad other small businesses within its portfolio. Management is seeking to restructure debt and focus on power, aviation, and renewable energy.

Meanwhile, United Technologies will be split into three different companies (the aviation businesses, Carrier, and Otis), and even the remaining Danaher company decided to split again by announcing plans to spin off its underperforming dental segment. 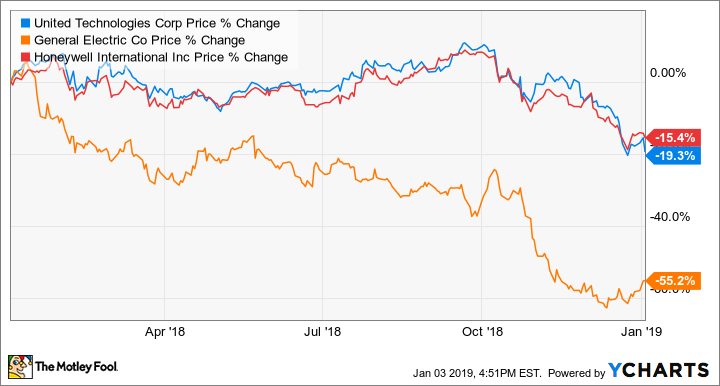 For United Technologies investors, there's a clear valuation discount that could be realized closer to the date the actual breakup occurs, and there's an obvious opportunity for, say, Carrier to improve performance relative to its peers. However, the problem is that the breakup is two long years away. This won't matter to long-term investors, but those nervous about a cyclical slowdown in the economy won't be buying United Technologies even with a valuation discount.

Honeywell's moves are more piecemeal, but they do remove businesses that tend to be lower margin and are not a good structural fit with the rest of the businesses.

Despite the doom and gloom, GE investors have cause to be optimistic that the asset selling will help reduce its debt burden. Meanwhile, the remaining businesses (aviation and power) have market-leading products already developed and selling (LEAP and the HA turbine), which will generate earnings and cash flow in the years to come. Moreover, a split would allow CEO Larry Culp to focus on improving margin at GE Power.

All told, the rationale behind the breakup actions of all of the companies discussed make sense, and it's the right thing to do to enhance shareholder value. It's time to wave goodbye to the industrial megaconglomerate. Investors are looking for more precise and focused investments now.