Please ensure Javascript is enabled for purposes of website accessibility
Log In Help Join The Motley Fool
Free Article Join Over 1 Million Premium Members And Get More In-Depth Stock Guidance and Research
By Lee Samaha – Nov 24, 2018 at 9:05AM

General Electric Company (GE -0.19%) has two specters haunting it at the moment. The first is the issue of liquidity in light of potential creditor calls GE might have in the near future -- SEC investigations, insurance reserve shortfalls, lawsuits, rising interest rates, and the need to put funds in GE Capital. The second specter is GE's declining fundamentals, which are causing its valuation to look high. Let's focus on the fundamental valuation of the company, and see whether the investment community might be treating GE too harshly.

It's no secret that GE's earnings and free cash flow (FCF) generation will fall significantly short of estimates, and that's arguably the reason the stock has declined so much -- down 56% in the last year. GE's management started the year expecting $6 billion to $7 billion in full-year FCF, only to cut the forecast to $6 billion on the second-quarter earnings call, and then declare that it would fall significantly short during the third-quarter earnings call.

To put this into context, for argument's sake let's assume GE hits $4 billion in FCF in 2018. That would put GE's market-cap-to-FCF multiple at 17.4 -- that's not particularly cheap for a company that has a large pension deficit that needs funding and faces rising interest rates on its other debt. 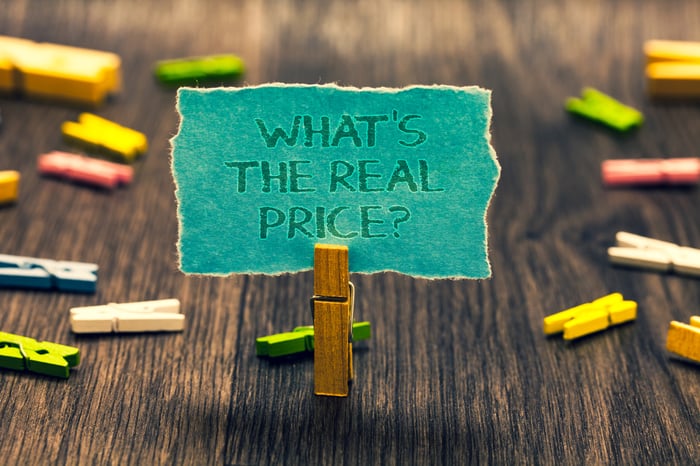 It gets worse. GE's current FCF valuation isn't seen as cheap, because the company is set to lose some of its best cash-generating businesses.

Let's go back to the investor update in November 2017. Here's what GE outlined in terms of FCF conversion from segment income for 2018. As you can see, the best businesses at converting cash in 2018 won't be a part of GE going forward, while the weakest ones are set to remain.

Clearly, GE's FCF is set to decline significantly in the future. Of course, this shouldn't be an issue in itself, because GE investors will receive the benefits of the FCF from GE Healthcare and GE Transportation through the separations.

Why the valuation of the remaining GE should rise

But here's the thing: The remaining GE company (comprising Aviation, Power, and Renewable Energy) should command a higher FCF valuation multiple than the current GE company. Here's why.

First, GE Power is obviously going through a difficult period of declining end-market demand. The company has taken substantive charges as it restructures and downsizes in order to adjust to the new market reality -- CEO Larry Culp recently said GE had reduced costs in the power segment by $700 million this year.

Cost cuts are good, but unfortunately, there's no guarantee that end markets will improve in the near future. As the recent GE SEC filing puts it, "market factors such as increasing energy efficiency and renewable energy penetration continue to impact our view of long-term demand."

On the other hand, GE doesn't need revenue in its power segment to grow in order to increase FCF. The key point is that margin and FCF conversion could improve in the future, even if revenue continues to stagnate. Based on that, it's not fair to value GE Power on its current FCF valuation, but rather on what it could generate in a few years -- don't forget that peer Siemens believes it will generate low- to mid-single-digit margin in its power segment in 2019.

Aviation companies tend to be valued differently than multi-industry companies because the former tend to require large up-front capital expenditures in order to develop high-ticket equipment, such as aircraft engines. In contrast, industrial conglomerates tend to have a set of businesses that ensure relatively consistent cash flow generation throughout the business cycle.

With regard to GE Aviation, the big story relates to CFM International's (a joint venture between GE and Safran Aircraft Engines) LEAP engines. The LEAP competes with United Technologies' (NYSE: UTX) geared turbofan (Pratt & Whitney) on the Airbus A320neo and is the engine powering the Boeing 737 MAX.

As you can see below, CFM is in the process of ramping up production of its loss-making LEAP engines; this is holding back earnings growth and cash flow generation at GE Aviation. But this is actually not a bad thing: GE will generate highly lucrative aftermarket parts and services on the engines after they are used for a few years.

For these reasons, aviation companies tend to be valued at a premium when they are in the investment or early developmental phase. It's an argument that hedge fund managers are using to justify a breakup of United Technologies -- Pratt & Whitney is seen as undervalued because it's in the midst of ramping up production of its geared turbofan engine.

All told, GE Aviation deserves a premium valuation precisely because its earnings and cash flow generation are being depressed in the near term.

Given that the healthcare and transportation segments haven't been separated yet, the next GE FCF guidance for 2019 will probably include cash flows for these two businesses, but analysts and possibly GE's management will also be giving estimates for FCF generation excluding these two businesses in 2019.

Given the current state of the power and aviation businesses, the remaining GE should not be priced as a multi-industry industrial company, but rather as a company with an artificially low FCF generation in 2018 and 2019.