Please ensure Javascript is enabled for purposes of website accessibility
Log In Help Join The Motley Fool
Free Article Join Over 1 Million Premium Members And Get More In-Depth Stock Guidance and Research
By Brent Nyitray, CFA - Updated Aug 12, 2020 at 11:50AM

One of the biggest revelations out of the coronavirus crisis has been how easily many white-collar businesses have been able to adapt to remote working. Just about every company that has reported second-quarter earnings has remarked that the transition to mass remote-working has gone well. Tech leaders like Google and Facebook have permitted employees to work remotely for the next year if they prefer.

Remote working vastly increases the demand for data, cloud storage and access, as well as bandwidth. That's why it's a good time to consider Equinix (EQIX 2.21%). Equinix is a real estate investment trust that dominates the data center space, and it's one of the few REITs that can satisfy both growth and income investors. 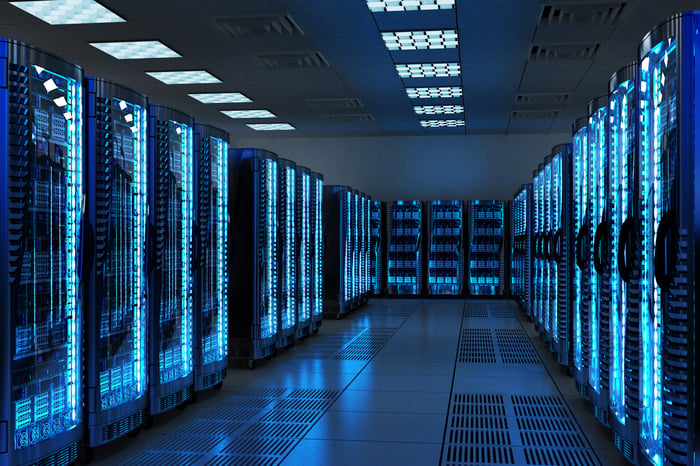 A record quarter for the Americas

Equinix put in another solid quarter recently and announced record bookings for the Americas. On the second-quarter earnings conference call, CEO Charles Myers said that the company had its third highest bookings for the Americas and signed on 4,200 new deals with 3,000 new customers. Equinix's customers are giants like Verizon and Oracle. Internet exchange traffic was up 44% year over year, driven by COVID-related videoconferencing as well as gaming. While COVID has inhibited decision-making at some customers (the company pegged the revenue effect to be up to $50 million), the increases in traffic and bookings demonstrate how remote working is driving demand for data and cloud storage.

During the quarter, Equinix reported a 2% sequential increase in revenue to $1.47 billion and an 11% increase in operating income to $282 million. Adjusted funds from operations (AFFO) increased 2% sequentially to $6.35 per share. AFFO is a better way to look at a REIT's cash flow than net income. REITs with a lot of real estate generally have a lot of depreciation, which is a non-cash expense. AFFO takes that into account.

Continuing to invest in the business

During the quarter, Equinix continued to make investments, buying 25 data centers from Bell Canada (including 600 customers) for $750 million. This helps Equinix develop a truly national platform in Canada. Overall, Equinix completed 4,200 deals with 3,000 customers. And it opened its 5G and Edge Proof of Concept Center (POCC), which provides a testing environment for mobile network operators (MNOs), cloud platforms, technology vendors, and enterprises.

Equinix was upgraded by Moody's from Ba1 to Baa3 during the quarter, and the company took advantage of that to refinance some existing high-yield debt at an average rate of 2.07%. In addition, the company issued $1.7 billion of common stock to fund further growth. It turns out that the interest savings from the refinancing covered the dilution from the equity raise. This leaves Equinix with about $5 billion of cash and about $12 billion in mortgage debt and senior notes. Last year, Equinix had about $3.6 billion in maturing obligations this year, but should be able to refinance these at lower interest rates. The $5 billion in cash alone can handle it.

Sometimes investors have to pay up for a leader

For a REIT, Equinix pays a somewhat miserly dividend of only 1.4%. For investors used to retail or mortgage REITs, this is quite small. The company also trades at a pricey 32 times guided AFFO per share as of Wednesday morning. That said, Equinix dominates its space unlike any other REIT. Its interconnection growth outstrips the next 10 competitors combined. The stock has been a stellar performer, rising 32% year to date. Sometimes investors have to pay up for industry leaders, and Equinix certainly fits that bill.