While the COVID-19 pandemic has devastated many sectors of the economy -- perhaps most notably travel and energy -- it has actually advanced others. There has been a wave of innovations as companies worldwide have attacked the problems created by the deadly coronavirus. As a result, tech and healthcare stocks have led the market rally, with the Vanguard Health Care ETF (VHT -0.97%) and Vanguard Information Technology ETF (VGT -2.57%) up 7% and 24% since January, respectively. Meanwhile, the S&P 500 index is only up by about 4%.

The market remains volatile, and in such conditions, the best defense is often a good offense. These three revolutionary health and tech companies have significant revenue momentum; here's why their stocks could reward investors in the long run. 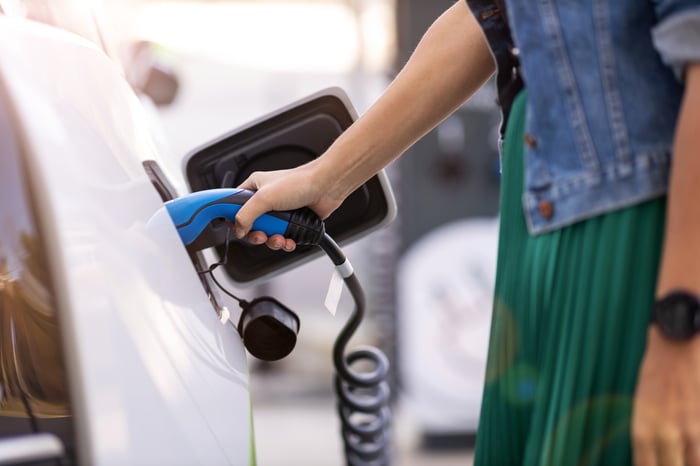 From vision to reality

In less than two decades, Tesla (TSLA -6.81%) CEO Elon Musk has accomplished what seemed impossible -- creating a high-end, fuel-efficient, and affordable electric vehicle. The widely popular Tesla Model 3 can be purchased for as little as $371 per month, and is 80% more efficient than conventional cars in terms of energy cost per mile driven. The company is now taking steps to upgrade its software so that eventually, every Tesla on the road can have full self-driving technology.

In the second quarter, the carmaker achieved its fourth consecutive quarter of profitability. After accounting for all of its capital expenditures and debt repayments, Tesla raked in $400 million in net profits. Its financial health is superb, with its cash balance reaching an all-time high of $8.6 billion as of June 30.

At the same time, the company generated about $5 billion in revenue during Q2. Of that sum, $428 million derived from regulatory credits, revenues from which were up by 286% year over year. Regulatory credits from such sources as the Zero Emissions Vehicle (ZEV) program in California are handed out by governments to assist electric vehicle manufacturers.

When a company has a sound business model and innovative products, it's never too late to invest in its shares for the long term. Additionally, the company is announcing a 5-to-1 stock split effective Aug. 31, which will make it easier for investors to purchase its stock. There are, however, risks involved; Tesla is currently trading at a price-to-earnings (P/E) ratio of 238; its price-to-earnings-growth (PEG) ratio is at a five-year high of 2.25. Hence, the growth most people are expecting may be priced in already. 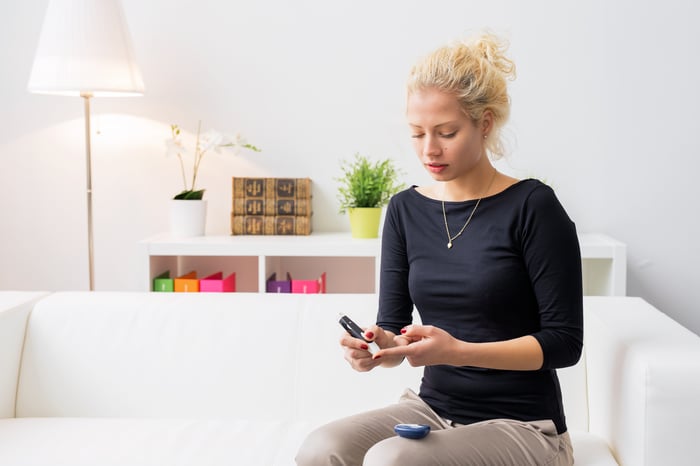 Livongo Health (LVGO) is quickly changing the way U.S. patients manage chronic illnesses such as diabetes, which affects more than 31 million people in this country alone.

The company's namesake app allows patients to monitor key health metrics such as blood glucose or blood pressure levels, and helps them interpret the data to reduce the stress and anxiety associated with their illness. While the innovations may seem small, they are significant in context. The company boasts that using its app saves an average of nearly $2,000 a year per patient in diabetes-related medical expenses.

Participants seem to like the Livongo app, too. In the second quarter, the company added more than 80,000 members to its diabetes program, bringing its total membership count to 410,000, up 113% year over year. Undoubtedly, some of the strengthening demand for its offerings relates to the fact that COVID-19 is more dangerous for those with chronic conditions.

Moreover, the company grew its revenue by 125% year over year to $92 million, and also achieved its first quarter of EBITDA profitability a year sooner than expected. Lastly, Livongo has over $836 million in cash and is only suffering from a marginal net loss, effectively ending its risk of further cash burn.

There is the potential for more good news for investors. On Aug. 5, Teladoc Health (TDOC -6.99%) announced it would be acquiring Livongo for $11.33 cash and 0.592 shares of Teladoc stock per share. Although the deal is not yet final, the deal structure effectively ties the two stocks' performances together. For example, if Teladoc was to hit $250 per share, Livongo shareholders would be entitled to $159.33 for every share they own, representing a 32.7% premium over the company's closing stock price Thursday.

As the COVID-19 pandemic shows no sign of subsiding in the U.S., I think it is likely that Livongo's momentum will continue. Hence, investors may wish to add it to their portfolios before the deal closes and Livongo becomes Teladoc. There are good reasons to buy Livongo instead of Teladoc right now; as of Aug. 14, its stock was trading at a 3.4% discount to its acquisition price of $122.33.

Overall, the deal will likely boost the two companies' earnings significantly thanks to synergies. Because Teladoc is already used by more than 70 million patients, those with diabetes who seek treatment on Teladoc's virtual platform can receive a referral to sign up for the Livongo app. If the merger is successful, then the two companies' growth rate this year will likely be north of 80%, surpassing Teladoc's growth rate of 78% in Q22020. 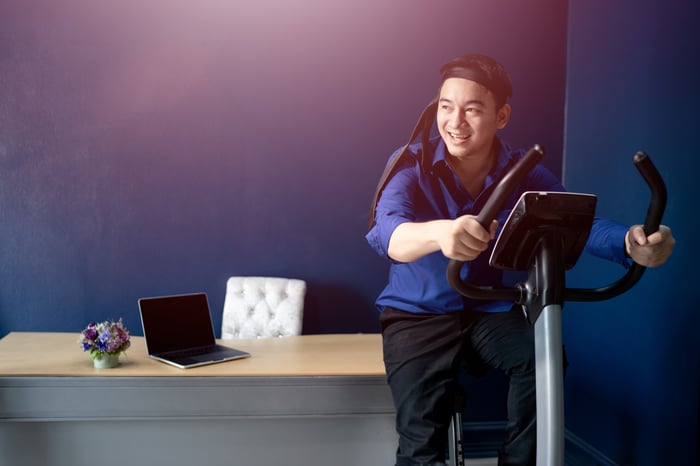 Peloton Interactive (PTON -14.44%) is making waves in the old-school fitness sector. Each of its namesake stationary bicycles features a 22-inch Wifi-enabled tablet that streams on-demand spinning classes to riders, allowing members to virtually compete against one another as they exercise.

The bikes don't come cheap, costing as much as $3,000 for the first year and $500 per year after that in subscription fees. However, those prices have not stifled Peloton's sales given many Americans' determination to stay healthy in the face of stay-at-home orders, gym closures, and the need for social distancing.

In the quarter that ended March 31, Peloton's revenue grew by 66% year over year to $524.6 million. The company also had its first profitable quarter in terms of adjusted EBITDA.

As for membership, the company's connected fitness subscribers (those who sign up for classes and have a Peloton bike) grew by 94% compared to the third quarter of 2019 to 886,000. The company now has 2.6 million total subscribers. One of the fastest-growing demographics among those subscribers are those under the age of 35 and making less than $75,000 per year.

If that wasn't enough, the company also has $1.4 billion in cash and investments with no debt whatsoever. Therefore, I think Peloton has genuinely built a recession-proof, pandemic-proof business that can enrich investors with its growth.

Zhiyuan Sun has no position in any of the stocks mentioned. The Motley Fool owns shares of and recommends Livongo Health Inc, Peloton Interactive, Teladoc Health, and Tesla. The Motley Fool has a disclosure policy.