Please ensure Javascript is enabled for purposes of website accessibility
Log In Help Join The Motley Fool
Free Article Join Over 1 Million Premium Members And Get More In-Depth Stock Guidance and Research
By Keith Speights – Aug 15, 2020 at 7:02AM

Here's how it could happen.

How could you make a lot of money? Buy shares of a company that isn't profitable yet and doesn't even have consistent revenue. Hold onto those shares while the company launches products, becomes profitable, and matures -- and over time, you could amass a fortune.

Inovio Pharmaceuticals (INO -5.47%) definitely fits the bill of a company that isn't generating a profit right now and doesn't have products on the market to generate a reliable revenue stream. It also has pipeline candidates that could change those dynamics dramatically within the next couple of years. Could Inovio be a millionaire-maker stock? 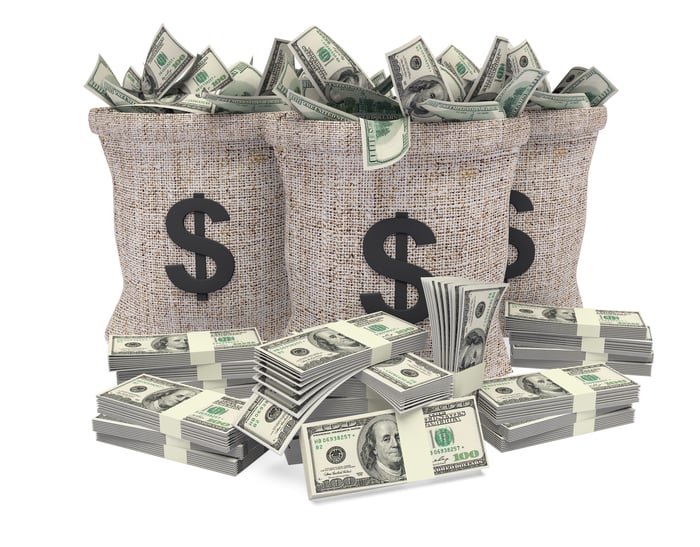 Let's first determine what it would take for Inovio to make you a millionaire. The answer depends largely on how much money you have to invest and how long you're willing to wait.

If you have $250,000 to buy shares, you'd only need Inovio to quadruple to become a millionaire. The biotech stock has achieved that goal, and then some, so far this year. Of course, most investors aren't going to have that much cash. And even if they did, they probably wouldn't (and definitely shouldn't) invest all of it in one stock.

The biotech's market cap currently stands at around $2.5 billion. To be a millionaire-maker, Inovio's market cap would need to rise to around $250 billion -- a little bigger than Pfizer's size today.

How Inovio could do it

Now for the more difficult task of figuring out how Inovio could turn $10,000 into $1 million: The obvious starting point is the biotech's COVID-19 vaccine candidate, INO-4800.

Inovio reported positive interim results for the investigational vaccine in June, although analysts hoped for more details about the production of neutralizing antibodies that can protect against infection by the novel coronavirus. If all goes according to plan, Inovio will begin a pivotal phase 2/3 study of INO-4800 in September. Assuming that study is successful, and the vaccine wins regulatory approval (or at least obtains emergency use authorization), the company could conceivably launch INO-4800 in the first half of 2021.

Pfizer and its partner BioNTech inked a deal with the U.S. government to supply 100 million COVID-19 vaccine doses for $19.50 per dose. If we assume that Inovio could fetch a similar price and sell 500 million doses of its vaccine worldwide each year, the company would make around $9.75 billion annually. That could push Inovio's market cap up to $60 billion or so.

Inovio's pipeline also includes a couple of other promising candidates, VGX-3100 and INO-5401. The company is evaluating VGX-3100 in a late-stage study as a potential treatment for cervical dysplasia caused by human papillomavirus (HPV). INO-5401 is in phase 2 clinical trials targeting glioblastoma multiforme, an aggressive type of brain cancer.

H.C. Wainwright analyst Raghuram Selvaraju thinks the two drugs could launch in 2023 if clinical studies go well, and could generate combined peak annual sales of $1.4 billion by 2035. That's probably enough to bump Inovio's market cap up by at least $8 billion.

But even with tremendous success for INO-4800, VGX-3100, and INO-5401, Inovio would still be less than one-third the size it would need to be to become a millionaire-maker with a $10,000 initial investment. It has other experimental drugs and vaccine candidates in its pipeline. However, there's no question that to have any shot at reaching a market cap in the ballpark of $250 billion, the company would need to develop additional products that aren't even on the horizon yet.

Could Inovio make this dream scenario a reality over the next few decades? Possible? Yes. Probable? No.

My hunch is that the chances that everything goes right for the biotech are lower than the prospects that neither Donald Trump nor Joe Biden receives enough Electoral College votes to win the presidency in November -- and the U.S. House of Representatives votes to make Kanye West the 46th U.S. President. It could happen, but don't bet on it.

On the other hand, it is possible that Inovio could generate impressive returns for investors. Success for INO-4800, VGX-3100, or INO-5401 would likely be enough to make that happen. For now, though, there's still considerable uncertainty about the outcomes for each of these candidates. Even if Inovio wins with all three, if you want to become a millionaire, you'll need to find other great stocks to buy.