The global hotelier waits for trends beyond its control to improve.

Upscale hotel franchisor Marriott International (MAR -1.99%) illustrated its ability to grind out a protracted recovery from the COVID-19 pandemic in its second quarter 2020 earnings released on Aug. 10. But exactly when the hospitality giant will see anything close to former profit levels remains a cloudy conjecture.

Marriott's results revealed a net loss of $234 million against a profit of $232 million in the prior-year quarter. Revenue dropped by 72% to $1.46 billion. Revenue per available room (RevPAR) across Marriott's system of owned and franchised properties plunged 88.6% year over year as occupancy slumped and average daily rates also declined.

The company noted normalizing conditions in its Greater China region, where RevPAR was down just 61% against the second quarter of 2019 -- all hotels in the region are now open. Yet China figured as a single bright spot as economies around the globe continued to see crimped leisure and business travel due to the pandemic. 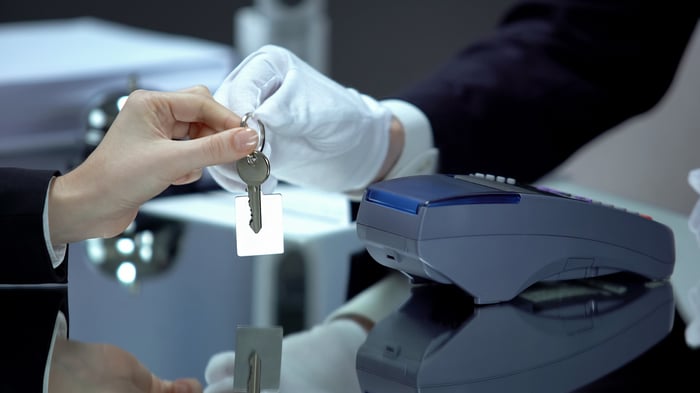 Given its wide year-over-year swing from a healthy profit to a significant loss, Marriott investors should drill down a bit on the current quarter to assess the consumer discretionary stalwart's resilience going forward.

Fees collected from franchisees and property management fees constitute the most glaring current weakness in Marriott's income statement. Subtracting out cost reimbursement revenue related to property management from top-line results, Marriott's net fee revenue and "other" revenue totaled $262 million -- a decrease of 81% against $1.4 billion in the second quarter of 2019.

Yet the organization incurred lower expenses associated with a reduced level of hotel occupancy, and management engaged in a significant effort to control overhead expenses. These factors, helped by Marriott's asset-light structure (its business model tilts heavily toward franchising and management of properties, rather than operating owned hotels), resulted in a trimming of operating expenses by 67%, to $1.6 billion. Thus, the quarter's operating loss of $154 million was steep but manageable.

How do Marriott's operating and net losses compare to its cash flow? The company has generated operating cash flow of $1.5 billion during the first six months of the year, although $854 million of this derived from a jump in deferred revenue. In other words, more than half of operating cash flow in the first six months of the year came from cash collected in advance of earnings. The deferred revenue line item on the balance sheet may stay elevated for a while, as deposits from group bookings stay in Marriott's coffers even as group travel events and conferences are rescheduled from 2020 into 2021.

It's more instructive to grasp Marriott's total use of cash, which includes all cash inflows and outflows (including fixed asset purchases, debt service, and cash paid for taxes). During the company's earnings conference call, CFO Leeny Oberg reminded investors that last quarter, based on a projected year-over-year decline in RevPAR of 90%, Marriott had estimated that its ongoing monthly cash burn would reach $90 million to $95 million. With the latest numbers in hand from July (one month past the end of the second quarter), the hotelier is seeing continued slight improvement in RevPAR; currently, it's tracking at a 70% year-over-year decline. Per Olberg, Marriott's monthly cash burn has consequently been cut in half, to roughly $45 million per month.

At the end of the second quarter, Marriott's current assets of $4.1 billion were outstripped by current liabilities of $6.1 billion. However, the company has roughly $2.9 billion available on its revolving credit agreement, and should be able to access capital markets to issue additional long-term debt if needed. Marriott has the resources to withstand its monthly cash burn for another year, or two if needed.

Of course, given the company's revenue model, its success ultimately depends on hotel owners' ability to stay in business despite historically low occupancy rates. Marriott has been able to help its global hotel owners reduce their occupancy break-even levels by three to five percentage points on average during the pandemic. It's also assisting some hotel owners with eased payment terms for the time being.

For now, Marriott has remodeled its business to survive during an extremely depressed environment. The company's financial performance indicates that moderate expansion in key metrics -- for example, occupancy rates climbing back above 50% -- could greatly improve its already declining cash burn. But as for profit, visibility may well remain clouded through the back half of 2020.

Why Travel and Leisure Stocks Sank on Monday
358%