Please ensure Javascript is enabled for purposes of website accessibility
Log In Help Join The Motley Fool
Free Article Join Over 1 Million Premium Members And Get More In-Depth Stock Guidance and Research
By Billy Duberstein – Aug 17, 2020 at 8:30AM

These three companies look poised to benefit from the growth of the mobile internet economy in China over the next decade.

Ongoing U.S.-China tensions have soured many investors on Chinese stocks, but before you write off the entire country, note that many Chinese tech stocks have delivered market-trouncing gains over the past decade. As China's two billion-plus citizens enter the middle class, it seems as if China's GDP is still set to outgrow the U.S., and most of the world, for the foreseeable future.

Top Chinese tech stocks also enjoy protection from U.S.-based competition within China, allowing these companies to grow steadily within the country. However, that's also part of the reason tensions are high between the U.S. and China right now.

Nevertheless, the opportunity within China and southeast Asia alone remain enormous, and, whatever one thinks of their government, many Chinese tech companies are doing some amazing things today. Here are three Chinese tech stocks that look like great buys today. 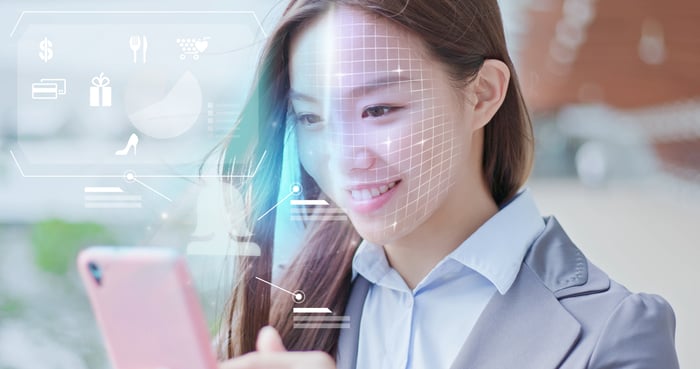 Alibaba: The leader in Chinese e-commerce and cloud

During the COVID-19 lockdown, Alibaba's Taobao Live livestreaming service for sellers saw 88% growth in merchants, as many offline merchants went online to reach customers. While ad revenue suffered and commission revenue came down to help out sellers, Alibaba's "new retail" segment in e-commerce surged as its Freshippo and other fast-moving consumer goods led its online marketplaces to 19% overall growth, and its Cainiao logistics segment grew 28%.

Public cloud traffic surged to due to an increase in video conferencing, with cloud revenue up 58% in the quarter. The company's Dingtalk app, which helps measure employee and student productivity, surged to 155 million users amid remote work and education initiatives.

Though Alibaba's e-commerce margins took a hit, as increased costs and more sales of lower-margin goods dominated the last quarter, the accelerated shift to the digital economy should pay dividends for this Chinese tech giant over the long-term. At just 29 times forward earnings, Alibaba still trades at a reasonable priced for such a mixture of quality and growth. Look out for more information when Alibaba reports earnings on Thursday, Aug. 20.

Financial technology software-as-a-service firm OneConnect Financial Technology (OCFT -3.92%) has pulled back mightily in recent days after a huge run-up in the second quarter. The stock is down 30% from its recent all-time high, but still up a whopping 98% on the year. 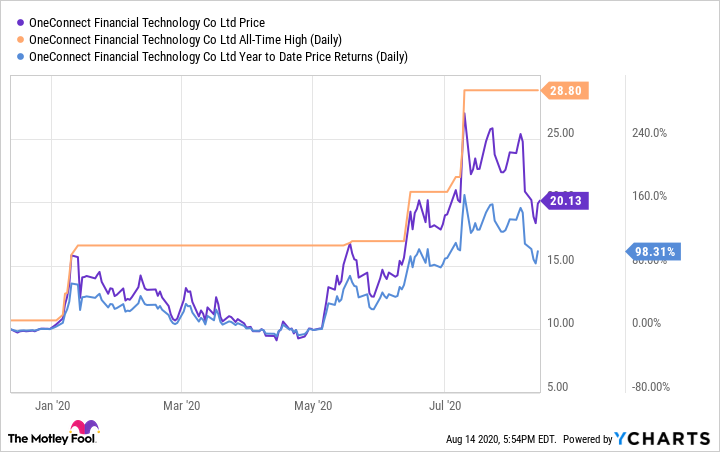 OneConnect offers a variety of technology solutions for financial firms and insurance companies within China and across southeast Asia, including its parent company Ping An (PNGA.Y -0.09%). The current environment is not ideal for OneConnect, as many of its software platforms are billed on a usage-based model. Since loan origination volumes are rather tepid amid COVID-19, that's a headwind to parts of OneConnect's business, especially those involved in sales and origination.

However, OneConnect's leading position in the digitization of finance operations and back-end infrastructure in Asia is overriding those headwinds, since much of the Asian financial system has not yet made cloud and SaaS-based technology transitions. Last quarter, revenue surged 48.4%, gross profit was up an even higher 93.4%, and, though the company is still generating losses, operating margins improved from (67.8%) to (46.6%).

OneConnect's shares took a bit of a hit when it announced it would be selling more American Depository Receipts (equal to three ordinary shares) at $18 per ADS as a follow-on to its December IPO, diluting the company by about 5%, in order to push investment in new initiatives.

Still, the material pullback in shares could be an opportunity, despite the stock's gains year-to-date. OneConnect is racking up some impressive customer wins, and as economic activity returns to Asia coming out of the pandemic, so should OneConenct's stock price over time.

Xiaomi (XIACY) is definitely a Chinese tech company to watch, having just passed its 10-year anniversary as a  company and the second anniversary of its IPO. Over that time, Xiaomi has grown from innovative start-up to global force with a near-$50 billion market cap. The company's mission is to offer leading technology at honest prices, and has vowed never to make more than a 5% margin on its hardware products, which include smartphones and IOT household products such as TVs, vacuum clears, and rice cookers. But investors should know that this strategy could reap rewards down the line. Xiaomi also sells internet services to that growing installed base, earnings high-margin revenue from games, advertising, e-commerce, and other services.

The market has looked with skepticism at Xiaomi, as its current share price is still a tad lower than its IPO price two years ago. However, Xiaomi's business held up quite well in the first quarter, actually growing smartphone units in the pandemic-affected quarter.

As the 5G era approaches, Xiaomi's new lineup of phones could catch on, especially in price-sensitive countries such as China, India, where it's the market share leader, and Europe, where Xiaomi is now the number one smartphone in vendor in Spain and number two in France. Its new flagship 5G phone, the Mi 10 Ultra, launches this weekend at just RMB5,299, or about $762. Its lower-end Redmi brand is also coming out with a 5G phone at just RMB1,999 or $287!

Xiaomi is not only trying to become a low-cost phone company but also one with the coolest products, such as the Mi TV LUX Transparent Edition -- the world's first completely translucent TV. In addition, the company hopes to change phone manufacturing forever, having just opened its first fully automated phone production plant this month, where it is producing the Mi 10 Ultra.

Basically, this ambitious and forward-thinking company continues to grow and innovate even in difficult times. As 5G and the Internet of Things take hold in the next decade, I'd expect Xiaomi's stock to follow well beyond its 2018 IPO price.