The problem with looking for stocks with high dividend yields is that those companies are often having a rough time, meaning their dividends -- not to mention their share prices -- are in peril.

If you're going yield shopping, you can find good deals by searching for companies that have good dividends and a strong financial position, but whose share prices are down.

Euronav (NYSE:EURN), TFS Financial (NASDAQ:TFSL), and Genuine Parts Company (NYSE:GPC) all have high yields on their dividends and a depressed share price. I like all three because while they are in industries that have been hit hard this year, these companies are performing better than their industry peers, meaning their share prices may be due for an upward correction. This gives dividend investors a great opportunity. Euronav is a bright spot in a cloudy market

It hasn't been the best year for tanker companies. The precipitous drop in the price of crude oil is one reason, because fewer barrels of oil are being shipped as refiners try to tighten up supply. On top of that, the need for tankers is down because of the COVID-19 pandemic, as the global slowdown also meant that less oil was needed for shipping. The International Energy Agency (IEA), in June, said that oil demand for 2020 would decline by 8.1 million barrels per day. Last month, however, it raised the outlook a bit, however, raising its forecast to 92.1 million barrels per day, compared to the 400,000 it predicted in June.

While the call for oil and gas certainly is down, Belgium's Euronav had a record second quarter. Part of that is actually due to the falling price of oil as the company said it was able to take advantage of increased demand for storage at sea because buyers had a hard time getting storage space on land for surplus crude.

Despite what are obviously positive financials, the company's share prices have fallen more than 20% year to date and as of Thursday were still slightly above $10 a share. That's good news for savvy investors, as the stock is essentially on sale with a price-to-earnings ratio (P/E) of 2.98.

Here's an additional payoff: Euronav's trailing-12-month yield is 11.6%, with a quarterly dividend of $0.47 per share. That level of dividend is not a given, however. The company stresses it wants to pay out 80% of the previous year's annual net profit as dividends. However, because the tanker business is quite cyclical, the company's dividend has been up and down. Euronav is in the process of switching from a semiannual dividend to a quarterly one. Last year, it paid out two tiny dividends of $0.06 per share. 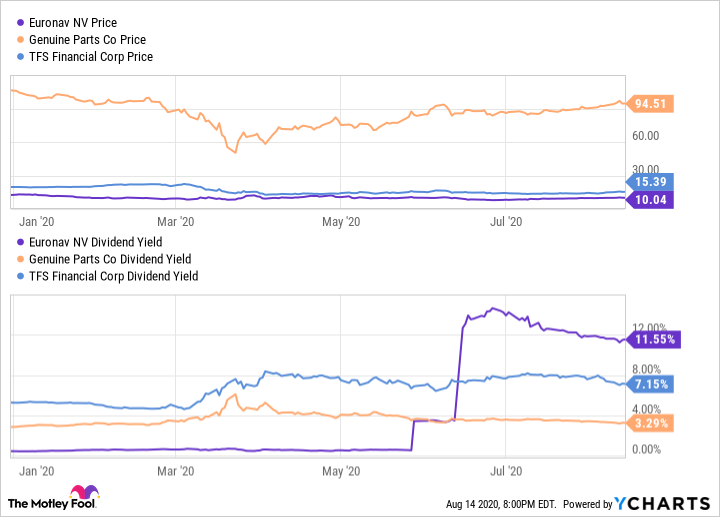 TFS Financial is weathering the storm

TFS Financial's shares are down more than 23% year to date. That may be understandable because it is the holding company for the Third Federal Savings & Loan Association of Cleveland and this hasn't been a great year for banks. Invesco's KBW Bank ETF, which attempts to track the KBW banking index, is down more than 43% for the year. The only market sector to have a worse year than financials so far is energy.

However, if you look at TFS Financial's books, it is underappreciated, especially at roughly $15 a share. In the third quarter, the company said it had net income of $26.8 million, a rise of 46.4% over the same quarter in 2019. One reason for that is TFS said it originated $1.2 billion in mortgages.

TFS has most of its branches in northeast Ohio and Florida, two locations that have been hit hard by COVID-19 -- a compelling reason for investors' concern. But that overlooks the fact the company handles mortgage loans and home equity loans in 25 states and the District of Columbia.

Here's the best part: The company's annualized dividend is $1.12 per share, with a nice trailing-12-month yield of 7.28% and it's a dividend that has risen for six consecutive years. Despite the high yield, the payout ratio is just 46.42%.

Genuine Parts Company is on the road to recovery

Genuine Parts' shares are down more than 11% for the year. That's not surprising because a lot of auto parts companies have been hit hard by the coronavirus pandemic. With fewer people driving, the need for auto parts has fallen.

Taking a more long-term view, however, this year appears to be a bump in the road. The company had grown revenue for five consecutive years and is as solid as they come, particularly when it comes to its dividend, which it has increased for 64 consecutive years. This year, it raised its quarterly dividend 3.6% to $0.79 per share, which works out to a trailing-12-month yield of 3.3%.